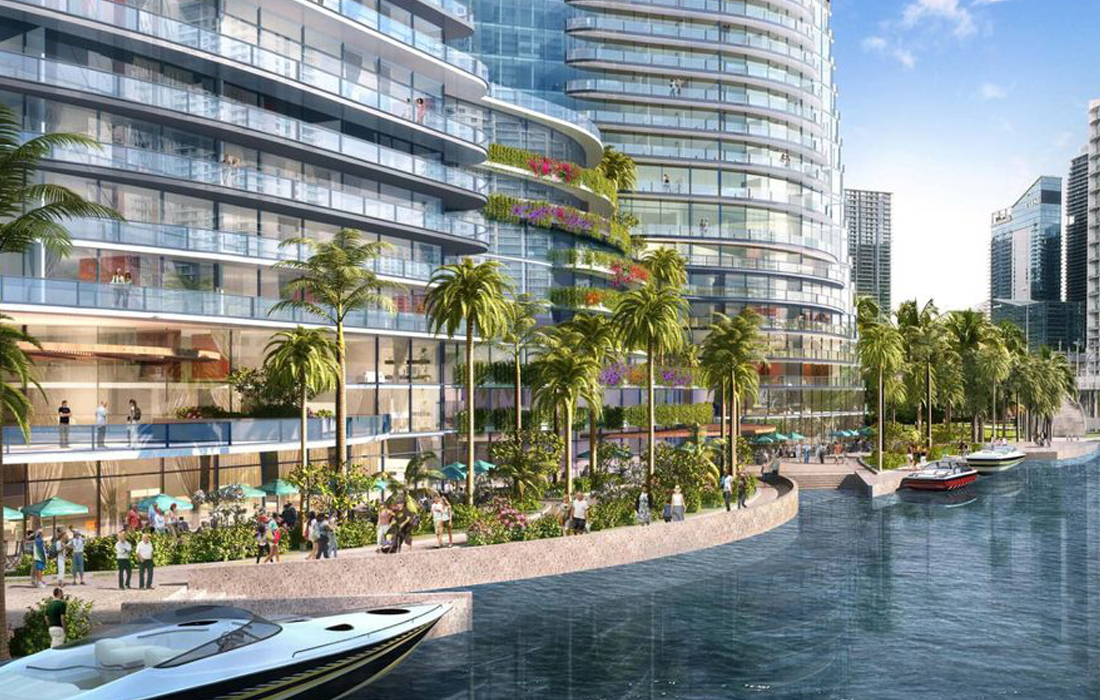 What was once a row of dilapidated docks, crab boats and salty fisherman, is now shaping up to be one of the Miami’s most valuable stretches of land, and most definitely, a soon-to-be sought after Miami neighborhood to live in. Worn out marine repairshops are slowly being replaced by some of Miami’s most trendy dining establishments and will soon welcome a completely reimagined Miami Riverfront.  Already under construction is the $300-plus-million River Landing Shops and Residences rising at 1480 NW North River Drive, the site of former Mahi Shrine Auditorium.

The 8.14-acre development is to include about 430,000 square feet of standard box retail (Publix, T.J. Maxx, Ross, West Marine & Hobby Lobby) and restaurants, about 475 market-rate apartments in two towers, and parking for about 2,200 vehicles.

Joining the quest to revamp the River is the project at 444 SW Second Avenue. Originally dubbed “Nexus Riverside Central,” it was reintroduced last week as “The Miami Riverside Complex.” This development is slated to be three to four towers sporting a mix of residential, office, retail, and hotel space. To be developed by Miami-based Adler Group, the initial renderings proposed in 2016 were modified for the current submission with wider views of the water and a larger and more accessible public river-walk component.

In an attempt to embrace nature and the site’s river frontage, a broad, undulating walkway path will mimic the natural curve of the Miami River, and will offer clearer views of the Miami skyline. Similarly, the earlier proposed squared-faced buildings have been replaced with curving, organic lines of balconies accented with lush greenery looking out over the river and waterfront cafés.

Despite being accessible by both land and sea, the Miami River has long only been utilized for commercial fishing and cargo purposes. However, its docks are only a short boat ride from Miami’s hundreds of yacht equipped homes, sandbars & recreation, South Beach marinas and offers direct ocean access. This proposed influx of new restaurants and gorgeous vistas will undoubtedly make Riverside a new hot spot to live, work and play, as well as premiere real estate that won’t go unnoticed by investors.

Ross Miami recently published a report, which showed that Miami luxury condos with water-views can command prices up to double than those without the view. We can also predict this will bring more value to the already existing residential homes and condo high-rises that have been sitting adjacent to what some considered one of the unfortunate plights of downtown Miami.

Although plans have already gained the approval of the Miami River Commission’s Urban Infill and Greenways Subcommittee earlier this week, the public will have the ultimate choice whether to vote for or against the proposed developments. Come November, residents will be the ones responsible to give the green light for the City to transfer the land they currently control to the developers and ultimately decide just how big Miami’s Riverfront will grow.

I think that the Miami River and Stiltsville are two of Miami’s most undervalued treasures. While tourists and locals flock to South Beach, the beaches, Lincoln Road and shop until they drop at Aventura Mall, Stiltsville and the Miami River offer some true flavor and history of the Magic City.