So I ask - is it possible to break disposal blades?  Let's hear an answer!

They are designed in different shapes to attempt to cut and chop debris in the disposal.

The smaller it is chopped, the easier garbage is to wash away.  The larger the motor (builder size 1/3 horsepower - my disposal 3/4 horsepower) the better the chop, slice and dice.

So, turning on this disposal it sounded funny.

It's important to listen to the sounds of appliances as they operate, and as you use or maintain them!

That way you will know when things just don't seem right.

I listen to lots of disposals! 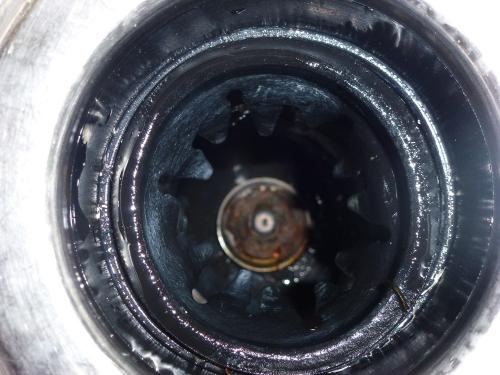 Turning this one on it did not have that clinking, grind sound I am so familiar with.

It sounded more like a jet engine, with a high-spinning whir, but none of the familiar clinking of the blades turning in an empty disposal.

And looking inside I could see why.

It was an old disposal and seriously rusty.

AND THE BLADES WERE GONE!

I don't know that I've ever seen that, and I have peeked into lots and lots of disposals!

Here are some DON'TS when operating disposals.

DON'T put this into your disposal:

Is it possible to sharpen the disposal impeller blades?

With ice.  Lots of ice.  And do it a couple of times a month.  Run cold water at the same time as the unit is grinding up the ice.

Grinding this ice will do something more.  Ice will harden any greasy deposits inside the unit and that will help to wash them away.

Is it possible to clean the disposal and get rid of odors?

Grinding lemon and other citrus peels will help a lot!  And their oils linger to help eliminate smells.  But don't put in large amounts at one time - they can and will clog the drain line!

Also, baking soda and white vinegar - 5 tablespoons of each.  Let it bubble up and sit for a while, preferably overnight.

Also, Borax and water.  Again, 5 tablespoons of each, letting it also do its magic and sit overnight.

I assure you that home inspector's disposals smell just as bad as yours.  This home inspector sharpens and then deodoraizes his disposal monthly.  He also has a big one - 3/4 horsepower, purchased on sale for less than $100 and he never looked back.

My Recommendation:  be smart!  Be careful what you put down the disposal?  If it gets stuck it can be loosened from below with an Allen wrench (disposals come now with a special wrench) or from above with a broom handle stuck down inside and turned clockwise.  Disposals aren't magic!  But treated well a disposal can last a good while, even 10 years or more.

Once I had a client call me to rip me for not telling them a disposal would not chew up a pork chop bone, and their disposal stopped.  My fault.  What can I say, Fred?

I bet it would clean it up a bit though... lol

Have always heard that we can clean and sharpen our disposal blades by using ice, Jay Markanich ... but glad to hear from our AR expert that it truly works!  Great and informational post ...

I had wondered if it was possible to sharpen disposal blades.  You provided the answer.  I learned something new today!

Question:  Friends of ours firmly state you shouldn't have a disposal with a septic system.  I'm of the belief that if you limit the material, it is just fine.  Your thoughts?

I'm glad you enjoyed it, Gene!  And for the attention on Google +!

Myrl - it's all relative, said Dr. Einstein.  They don't sharpen that much, but can become duller with time.  Their aim is to chop garbage up, so the better the impellers can do that the easier things drain.

Stephen - I know they make disposals just for septic systems, but I have no information as to how well they work.  That being so, certainly what is put down makes a difference.  With septics the less cellulose the better, for sure.  But what contributes to the bacteria content of the system can't be that bad.

Jay what an awesome post and you are spot on, I am here thanks to Gita Bantwal  re-blog. I never put anything into the disposer as much as humanly possible...I wipe out the grease with paper towels as an example before I do the dishes and the list goes on and on...Endre

Had not known the ice trick...but know it will find its way to our newsletter !

Thank you, Endre.  I am shocked, shocked (!), you did not read this the moment I posted it!  Kidding.  We try to put useful information out there.  You might enjoy my previous post on LED lights.

S&D - sometimes things that seem simple work great!  Not too much ice at once, however.  Always good to be newsletter worthy!

Thanks so much for your tip.

Wow, this is great education for homeowners about the care of their disposals, Jay. I'll be sharing this one for sure!

Gracias, Hermano Jeff.  I am glad to contribute to your database!

What you descirbe is like q human eating a tough steak with having teeth. The gums just can't do the job.

A good description of a disposal, Joe!  Get a steak eater with a lot of horsepower!

HI Jay Markanich - Great blog post. Most people don't realize many things that should not be put into the disposal. I have never seen one with no blades!

Sheri - they must have put in something severe!  I don't remember seeing that either!

Great post Jay Markanich I am so glad that Gabe Sanders reblogged it as I have missed a number of your posts...this will make a great newsletter addition for my clients.

Personally I don't use my disposal, never have!

Lisa - I think more people saw his reblog than read my original blog.  That's why I haven't been on AR very much in the past many months.  But I'm glad you enjoyed and post.  I try to post informative material!

Hi Jay Markanich I am enjoying this post even though almost a year old. Love your list of things NOT to put in the disposal.

We miss you on AR. But knowing you, you are way too busy to be posting. Wishing you all the best.

Thanks Margaret.  I try to post blogs that are informative and educational and find that very few people read them.  So I have slowed down to focus on business pursuits.  I have a post now and then.