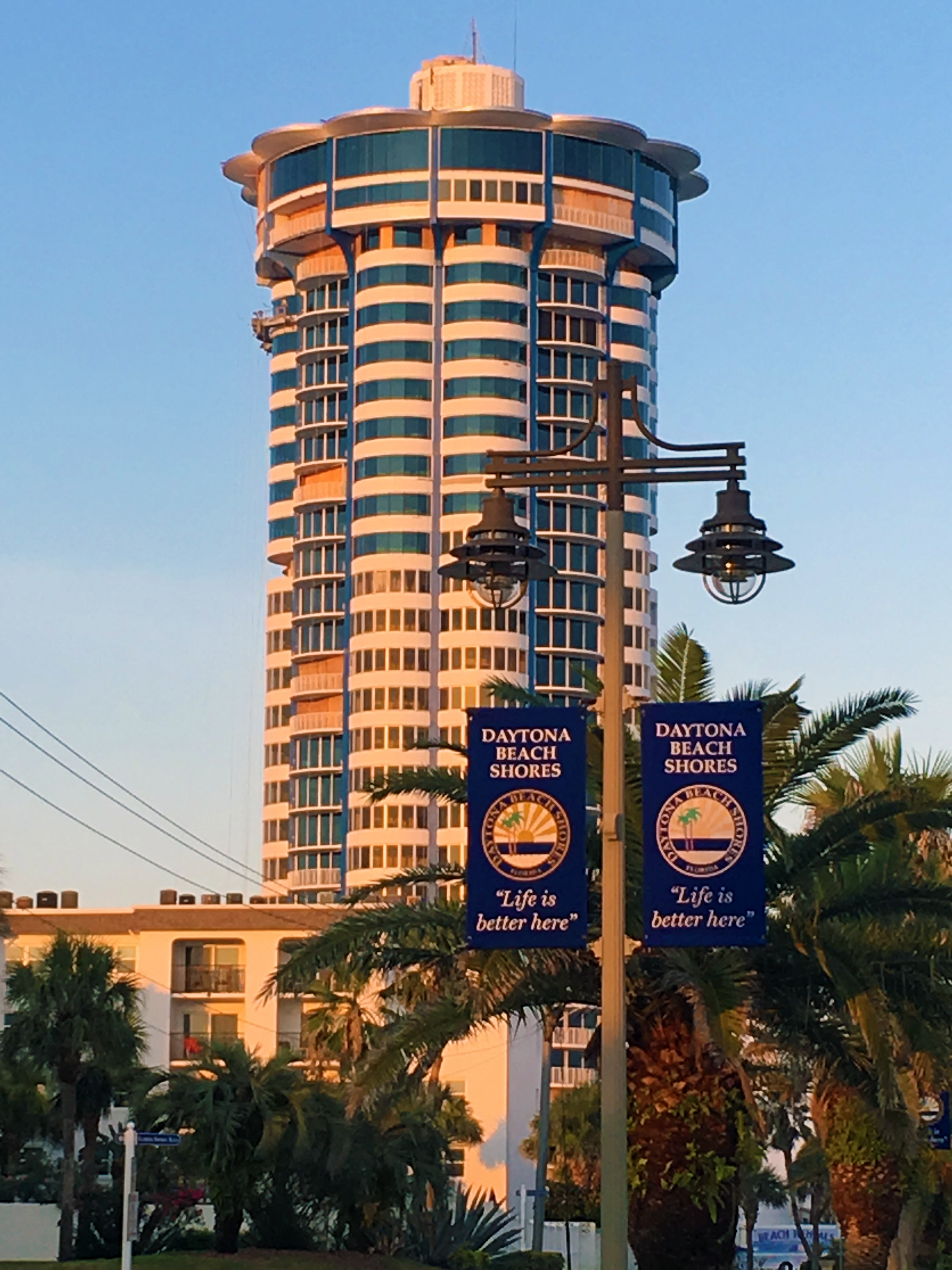 Peck Plaza Condominium is one of the buildings that were severely damaged by hurricane Matthew in October 2016.

The Hurricane and ensued lengthy restoration project has displaced owners and tenants in 100 units in the area tallest 343-foot building. It also severely damaged Top of Daytona, the well-known top-floor restaurant, and bar.

Displaced owners are still paying our mortgages. And large assessments are coming.

The building was closed for a $10 million restoration project. A sizable part of it would be insurance money, and sizable part – Special Assessment. It is still not finished, and it would probably take a few more months. They should have been done by now, but Hurricane Irma blew out 9 windows, and 11 sliding doors, plus caused some water damage. As far as I understand, there was also some tension with insurance money. That delayed the project. Imagine the towering Peck Plaza with nothing inside, only metal studs. Everything inside had to be thrown out.

Meanwhile, the owners still have to pay Association Dues, taxes, and it is the 21-st month of the project going and reminding all of us what kind of damage a strong Atlantic Hurricane could bring. This hurricane caused about $600 Mil in damages to Volusia County.

The restoration project includes replacement of 1,500 windows at a cost of $4 mil. About $2 mil was spent on roof repair. Restoration of interiors would cost about $4 mil to replace carpet, drywall, and flooring. The first new windows are scheduled to be installed this week, he said.

It is interesting to note that the guy in charge of the work there is Edwin Peck Jr., president of Peck & Associates Construction, project’s General Contractor. And the developer, that built this tower in 1974 was his father Edwin Peck Sr. He lives in his unit in this building, and is now displaced, like all 100 owners.

The extent of the damage allowed to make changes to the building, which otherwise would not be possible to do, like installing sprinkler system pipes, and other things.

Look at this photo. This is Peck Plaza After Hurricane Matthew, actually 21 months later. There are still no railings on the balconies. See how they changed the style of windows? New on higher floors and you can still see old ones on lower floors.

So, what about market analysis for Peck Plaza After Hurricane Matthew? There is none. No market, no analysis. The last units sold July 29, 2016, was unit 22SE for $326K. No sales since then.

But considering that the building will be in better shape than it had ever been, we expect the values to increase.

$10 millions for 100 units means $100,000 per unit, plus cost of displacement. But then the market value of the units will increase more than that amount, most likely. Looks like some times we need a tragedy to force us to renovate and see the business under a different perspective. Hopefully OI owners don´t need a strong hurricane.

Quite an interesting perspective. But you are right. And just think about telling the owners that they would need to spend a lot of money voluntarily, and it would be difficult to impossible.

Exactly, That´s what I mean. Everybody wants a great business by investing nothing, like by magic. We might need a hurricane.

It is better increase after this major renovation.