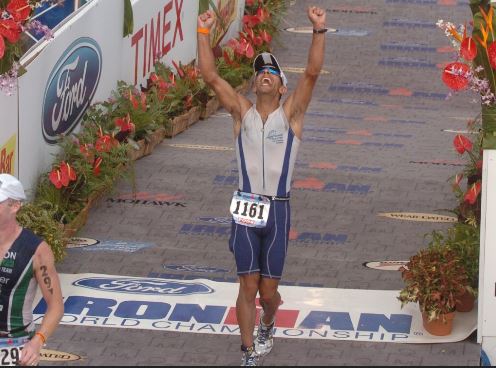 In the unlikely event of a water landing...

Saturday, 10/13/18, will be the 40th edition of the Ironman Triathlon World Championship, which means that if you are "lucky" enough to be participating in the event you are on your way to Kailua Kona today, or are already getting your first experience of "race week" in Kona.  Maybe taking a dip at Dig Me Beach this morning and having some macadamia pancakes at Lava Java.  There is nothing quite like it.  The Big Island air is softer, the tropical colors are more vibrant, the songs of the Hawaiian birds more memorable and the energy of your fellow athletes never more palpable.  This is triathlon's big dance.  It's a crescendo of incredible memories leading to a day of extreme effort --- one for which most of the competitors are adequately prepared and yet equally apprehensive about.  Ah, if you could somehow get the race out of the way first and then just have the fun of race week for a few days afterwards?

The race in Hawaii, which the general public tends to know about even if it does not follow anything else pertaining to endurance sports, is actually exceptionally difficult to qualify for.  Athletes from around the world --- including many of world-class abilities --- vy for just a handful of spots at races throughout the year.  In the end, about 2500 triathletes will  tread the hallowed waters of the Kailua bay at dawn on Saturday, waiting for the cannon to blast and send them off on their 140-mile journey of swimming, biking and running.  With mission accomplished and times ranging from 8 to 17 hours, the triumphant will cross a finish line just a few steps away from the beach where they start but will do so having earned bragging rights for a lifetime.  "Oh, did you ever do that race in Hawaii???"  Yes, let me tell you about it...

I was never a world-class triathlete but I had a penchant for suffering and a singular dream to race in Kona.  Little did I know when I took up the sport at 30-years old what I was getting myself into.  After all, I had zero swim experience so I had to learn that skill from scratch and somehow figure out how to sustain the college try for 2.4 miles.  Cycling?  The last bike I'd owned was a Sears Free Spirit, sometime before high school.  Training to complete 112 miles in the saddle became a necessary obsession.  I was a solid runner, notwithstanding I had never run a marathon, but at least enough gravitas to intially kid myself that I was not entirely crazy for thinking one day I, too, could cross the finish on Ali'i Drive.

It took me seven years and many attempts at Ironman triathlons of lesser prestige before I finally "cracked the code" and qualified for the World Championship for the first time in 2008.  That was ten years ago and the 30-year anniversary of the event.  At the welcome banquet, I recall the event emcee, Mike Reilly, saying that of all the competitors in the race, the largest contingent was male, American, from California, in the 35 to 39 age group.  In short, after believing in the most outlandish of dreams, I had found my to Hawaii against the longest of odds.  For all those there this week, good race or bad --- and I have had both in my three races on the island --- step outside of your extreme A-type personality and realize how awesome it all is to be riding back to town with Madame Pele's furious winds battering you on the highway, all the while with the blue Pacific on your right shoulder and the fire of the Hualalai volcano in your heart.

Oh, and one last thing.  Race week is intimidating as hell.  No matter how fit you are, everybody else looks leaner and meaner.  It's easy to have your confidence shaken before the gun goes off.  Remember that  you earned this day, this week, this lifetime accomplishment.  Remember that fitness at that level, and ability to train and participate in that event of that scope requires an alignment of the stars that can change for any number of reasons in your life; kids, career, health or all at the same time.  Today, race week is just getting underway.  Enjoy every minute and live it to the fullest.  I am there with you in spirit and rooting for you --- especially at the low spots.  There will be many of them.  Keep going.  Don't quit.  It's so worth it.

Wow, Rob, I had no idea you were such a jock!  I admire your committment to your goal.  I laughed at the " penchant for suffering" statement.  Don't we all in the real estate business?  LOL

Rob Spinosa - You have a lot of determination to achieve your goals and you've done so much with your life. I'm really proud of you and wish you continued success in all your goals.

I never did what you did; however, my daughter has participated in triathlons and I know how brutal it can be to the body. May you always be healthy and strong to keep going!