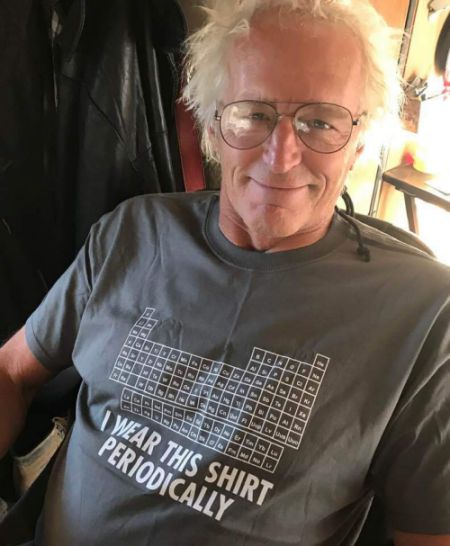 Big week of reports against a backdrop of a market in serious motion and on the eve of a pivotal election.  Fasten your seatbelts...

Spring of 1996, I had just returned, rudderless, from living in Italy for several months.  I found myself renting a place and an edition of Outside magazine, likely intended for the previous tenant, found itself in the mailbox.  Having been summarily captivated by the "Into Thin Air" tragedy on Mt. Everest described therein, I did what any 25-year old male would do --- took up mountaineering.  The reason I am telling you this is because, at the time, The North Face was a predominant gear supplier for that sport and they had this slogan, "Never Stop Exploring."  Simple.  Predictable.

Fast forward 20 odd years, 'retired' from the big mountains and married for eleven of them, our family was suddenly summoned to say goodbye to my wife's father, Dave Wilson.  After days of intermittent waking from a coma, Dave succumbed to a brain hemorrhage suffered while constructing an outbuilding on his property in Angels Camp --- his last frontier in a lifetime of exploration.  I mean, most would ask, "Who, at 66, goes out to the rugged foothills, breaks the land with his wife and partner in crime, Vicki, and attempts to build a home instead of just retiring quietly somewhere in town?"  To paraphrase the surf world, "Dave would go."

I'm not trying to memorialize anyone here though.  I've lost others close to me enough times to know that in short order, we all return to our daily lives, our daily selves, our daily patterns.  But what if I could distill the value of this one relationship into one phrase that I could carry forever?  Something simple, something predictable.  With Dave in mind, it came quite easily.  "Never stop discovering."

Dave was an artist, an inventor, a tradesman, a madman.  I recall many a conversation where we'd muse about the complexity of a passion at hand.  Perhaps I'd be trying to lower my time in a running race or he'd be trying to unravel some astrophysics calculation that would only serve to remind me I struggled with freshman algebra.  Nonetheless, we'd indulge each other, in detail, about the nuances of any crux we had yet to clear and while expressing a mix of wonderment and frustration at our folly, he might, for example, blurt out something like, "I know!  It makes NO sense!"  Meaning, for him, he had just not figured this one problem out...yet.

Alas, a solution always arrived.  The equation was always solved.  The circuit always closed, the concept always eventually internalized.  Not so much because he kept exploring, but because he never lost the magic of discovering.  Each time I saw him, which now in retrospect and with regret was not nearly often enough, he had a new challenge before him.  Learning "You Are So Beautiful" on piano, inventing and building a collection of art cars for Burning Man, mastering the outermost features of the latest digital camera, pioneering a homestead in 100-degree heat.  On that last point, that last frontier again, isn't it fitting that no grass grows there?

Dave's restless intellect was infectious.  It encircled him like the rings of Saturn with a cast of characters replete of their own quirky geniuses --- friends would suddenly crash into his orbit, share their wisdom, sleep in his spare bedrooms, disrupt his evolution with the elements of their solar system and then blast back off into the cosmos.  This was the order of his universe, with all its incomprehensible complexities and contradictions.  We were lucky to have shared a corner of it with him for a stitch in time.

Winter of 2006, I had just been to the jeweler's on Market in San Francisco, which meant that with a quick trip over the Bay Bridge I could be in Berkeley in short order.   I showed Dave the engagement ring I had bought and asked for his daughter's hand in marriage.  Mercifully not one for tradition, I sensed that he was far more impressed by the stone than by my chivalry and so the conversation was easy and light.  He stared at that thing though, almost as if having realized in the moment that some exquisite combination of time, pressure, stardust and million year-old carbon could produce such beauty.  You could say it was a discovery.

Shine on you crazy diamond,

Like always the numbers keep moving around.  Many times for no good reason

Rob Spinosa - This is one of the best family love stories I've ever read in text book and on ActiveRain. You're like a modern day ramblin man filled with courage! "Never stop exploring!" You have so much more to do!

Your wife's father was a reincarnation of an original Pioneer and I felt the love in your heart for him that you will always carry with you. Thank you for sharing such amazing stories about his life. He truly lived life to the fullest and was taken too young. Because he lived, and you developed such a strong bond, allowing him to take you under his wing, he made you a better man. You should be so proud of yourself and I'm sure your wife is too.

Thank you for sharing this beautiful and remarkable story about you and your family.

Congratulations! You're being featured in The BananaTude Group! Keep discovering and sharing - we can all be enriched when we hear great and positive stories from cherished AR friends.

Like
Lee Potts
Aloha Group Maui - Lahaina, HI
The smarter we work, the luckier you get.

REX Homebuyer Participating Lender 80-10-10 Loans What Happens if My Appraisal Comes in Low? Can I Get a Cosigner on a Mortgage?