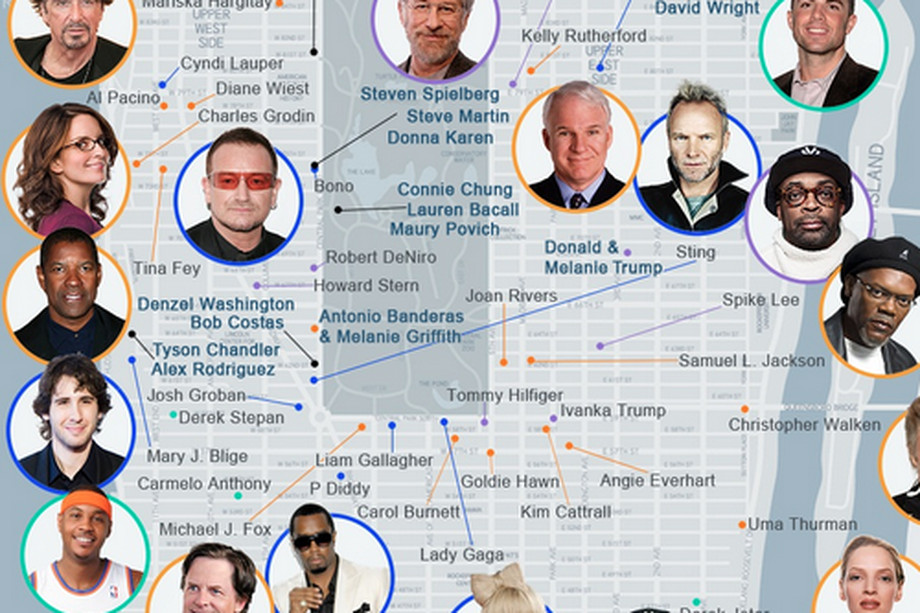 California is often thought of as the star-struck state, but there are a dazzling number of celebrities that live in NYC as well. As opposed to the glamour of show biz, New York City has always been seen as the place you go to “make it big” in business, Broadway, or song and dance. And for marquee names ranging from Bette Midler to Madonna, Manhattan is where they achieved their success. However, there are also stars of the silver screen that have made New York their home, drawn by the allure of status and security you can only find in Manhattan real estate.

Taking a look on the map of the stars homes in Manhattan it’s possible to point out film legends such as Paul Newman, who had lived just off the park, near Bette Midler, on East 93rd. Tom Hanks has made his home on East 79th Street in the UES. Martin Scorsese lives a few blocks from Spike Lee on E. 62nd. While Steve Martin, Steven Spielberg and Bono share the same address overlooking the park on West 74th Street.

Throughout the storied history of New York City, there have been addresses that have become as iconic as their famous inhabitants. The Apthorp building on 2207 Broadway was built in the form of an Italian Palazzo in Florence, the Piti Palace, and is the size of a city block. Over the years it has had famous tenants including Conan O'Brien, Kate Nelligan, Rosie O'Donnell and Al Pacino. The Apthorp has undergone a gut renovation and is now a condo with units starting in the $2,000 per square foot range. The Dakota building on 1 West 72nd Street was the famous home of Judy Garland, Lauren Bacall, Maury Povich, and most notoriously, John Lennon. This was where he was shot and killed in 1980. Yoko Ono still lives there, and across the street is Strawberry Fields in Central Park, where there is a shrine to the Beatles legend.

There are advantages to having a celebrity in your neighborhood, or the spirit of one in your halls. Their prestige rubs off on your real estate. It becomes a conversation piece, a status symbol, and it reflects on the resale value of the property. To be sharing the same sidewalks with famous Hollywood icons is the kind of promise that sells Manhattan real estate as much as a view, or proximity to Central Park. Not to mention there is always the chance of meeting a star at the coffee shop like I did a couple years ago. While going over some lisitings with a client at the Starbucks on 81st & Columbus Avenue, suddenly UWS's resident & Oscar-winner Diane Keaton asked me if she could share a table with with us. Of course I said yes while telling her that the conversation may be too boring but she said something like: "please carry on, New York real estate seems to be part of anyone's conversation these days".

Ricardo, that is very cool, and last trip into NYC I never saw any stars, and I looked!

Some of our stars have homes in both states.  We are very ho-hum about  the stars especially in Los Angeles.  We saw them at the market where we shopped both sport stars and movie stars and TV stars.  We saw them pumping gas like we did at the neighborhood Chevron.    And Streisand has a home in Malibu too.

We lived around many stars in our LA neighborhood including OJ Simpson....We did not give a hoot one way or the other.  But then, that how we feel about them, oh yes, we have many stars in Santa Barbara too.  A

Ricardo, interesting about real estate in NYC and living near a star or two.

Yes, there are definitely stars in NYC. Thanks for sharing!

I have occassionally run into a celebrity - and sometimes people who are celebrities but I don't have a clue! Not up on the modern pop culture.

Good morning Ricardo - living north of the city I have certainly seen my share of celebrities there.

I've seen a few out and about in NYC, but mostly I have seen them in The Hamptons...

Ricardo, love your post, never the less if we counted number for number the Greater Los Angeles would have more starts .... now keep in mind many of the ones you listed also have homes in LA area.... now on a side note Paul Newman truly called Connecticut his home even though he lived in LA an NYC:)Endre

That's quite the star-studded map, Ricardo Mello ... stars everywhere you turn.  Having come from Manhattan, Illinois (population 7,093) ... I can tell you there's just a little bit of a difference in the real estate property being transacted!