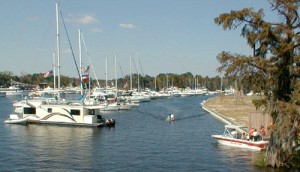 Madisonville, Louisiana is the town at the end of the parish “across the drawbridge,” which, during our mild spring, hot summer, and comfortable fall weather, remains open a lot for boaters passing along the Tchefuncte River. This causes a slight inconvenience for residents, but it is an inconvenience they don’t mind because living in the small town of Madisonville, LA is worth the hassle. Madisonville could be considered a “water town.” The Tchefuncte River winds through and backtracks through the town making the numerous bridges a necessity. Madisonville is also bordered by Lake Pontchartrain as it is located where the Tchefuncte River empties into the Lake. At this junction is the Madisonville Boat Launch and Pier, which includes a covered pavilion, perfect for fishing and swimming. This is also the location of the Tchefuncte River Lighthouse which is under restoration. Madisonville was incorporated in 1811 with a new name. Its previous name was Coquille, the French word for shell because of the many oyster shells and other seashells in abundance throughout the town’s location. It was renamed after James Madison, the 4th president of the United States.

The Lake Pontchartrain Basin where Madisonville is located is more like a wildlife habitat where residents of Southeast Louisiana reside as evidenced by their constant “fight” to keep the “water at bay.” Without the continued efforts of levee protection and wetland restoration, nature would definitely “move back in” and take over this unique piece of Louisiana landscape. The wildlife habitat characteristics of the region are one of the reasons that Louisiana has become one of the top fishing and hunting areas in the United States, truly a Sportsman’s Paradise. People from all over the country travel to Louisiana during duck and other waterfowl seasons, and many people purchase local fishing licenses to fish in Lake Pontchartrain, our bayous, and waterways, as well as the Gulf of Mexico. Louisiana fishermen produce the majority of the shrimp, crab, and oysters that are served up in fine dining restaurants all over the United States. This and other historical facts are available at The Maritime Museum, which backs up to the Tchefuncte River and makes both its facility and its dock available for special events and visitors. The Madisonville Museum is housed in a building which has been listed on the National Register of Historic Places, which was the original Madisonville Courthouse. The town jail’s six cells are downstairs, directly below the courthouse. The museum has exhibits on the local wildlife, the Civil War, and Native American culture. The museum also features recordings from Madisonville residents about the town’s history. It is free and open to the public on Saturdays and Sundays. 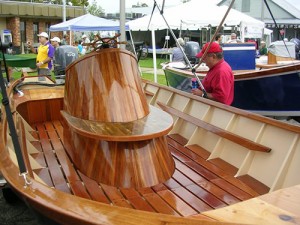 Madisonville recently had to close its over 100-year-old library building and build a new library. The new facility, which opened on September 7, 2013, was designed by John Owens of SizelerThompson Brown Architects. The new library has public computers for internet access, a technology lab with 12 computers specifically dedicated for instruction, a large meeting room, a teen area complete with café-style internet tables, a large television for computer games and a youth computer area for internet access. It also has a children’s room built to “kid-like” specifications which is used as a reading room and for story-time programs. The town also erected a new Town Hall and Community Center featuring recreation space for football, baseball, and soccer. Tennis courts are also available to people of all ages. 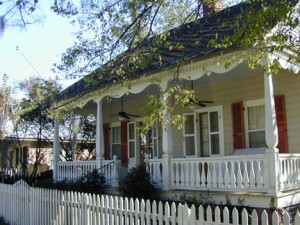 For more recreation, homeowners can visit Coquille Sports Complex, home to St. Tammany Parish Recreation District 14. People who move to and live in houses in Madisonville, Louisiana do not have to travel far to get their kids involved in all types of sports programs. The facility was just recently renovated to include two more soccer fields, a walking trail with a picnic area, a splash pad, a climbing hill, fishing pier, and additional gymnasium and office space.

Madisonville features 3 events which draw thousands of visitors not only from St. Tammany Parish but also from the Greater New Orleans area and out of state. The Madisonville Wooden Boat Festival features approximately 100 wooden boats of all shapes and sizes. The participants enjoy the boat building contest/race as well as local live music, food, and entertainment. St. Anselm Church annually sponsors a Golf Tournament, which is held at the Tchefuncte Country Club. Finally, Madisonville holds an outdoor, bi-monthly art market on the banks of the Tchefuncte River which features local artists’ works of art which include painting, photography, woodworking, pottery, jewelry and other art forms.

Madisonville is a small town, full of people who enjoy the feel of a tight-knit community, the warmth of “knowing your neighbor,” and the thrill of living on the waterfront. Buying a new home in Madisonville, no matter what your family’s size, will ensure you have access to the top schools in the St. Tammany Parish school district, a quality-built home that will retain its value, and access to all sorts of historic, recreational, and water-related activities. If you want to live on the water in a house in St. Tammany Parish, you should definitely check out all that Madisonville, Louisiana has to offer.

Click here to see all homes for sale in Madisonville, Louisiana!

Madisonville offers many great subdivision choices. Please click on each of the popular locations below to learn more: