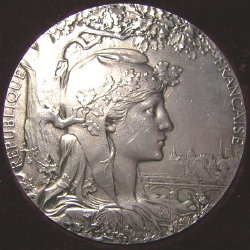 When you retire, they say get a hobby!

I have found this to be good advise,  so when I retired I started collecting again. I used to collect coins as a kid.  But life happens and you get busy, too busy for a hobby.  I really didn't know I missed collecting until I rediscovered it again.

I started collecting again quite by accident.  I was going to take a Baltic Sea cruise and it stops in St Petersburg Russia,so when I saw some Russia medals in a flea market, in got my interest. The seller said they were real medals from Russia collected by a professor from the local college and got him on the phone to verify. I bought them.

Well  I had not idea what they were, so naturally I got on Ebay to do some research and found them.  Interesting.  While on EBay I search medals category and found an award medal from the 1895 Cotton States Exposition in Atlanta where I live. I did some research and found this was an International exposition which awarded medals to the best in many categories. I bought that first medal and that started my collection of Exposition Medals.  Yes, that is my web site of the medals I have collected.

You really get to learn history when you care collecting medals  of the World Fairs and Expos,which is what I did. To think the award medals are still around 100 plus years later is amazing.

Did you know that The Exposition Universelle of 1900 was a world's fair held in Paris, France, to celebrate the achievements of the past century and to accelerate development into the next.  More than 5 million people attended the exhibition (a world record at the time), yet it still failed to turn a profit, costing the French government 2,000,000 Francs. The fair included more than 76,000 exhibitors and covered 1.12 square kilometers of Paris.

In the US, the first large exposition was the 1876 PHILADELPHIA INTERNATIONAL EXHIBITION. It was to celebrate 100 years since our independence. The liberty bell was on display. The1893 Chicago Columbian Exposition was a very popular expo and the first Ferris wheel was introduced. The medal above is from that expo.

I have enjoyed collecting again. It has been interesting and fun plus I learned a lot of history in doing so.  Retirement can be what you make it.

Oh, you are right.  Got the wrong date on that one.  Yes, I wish they had more of these today.

I have at times gone back to my stamp and coin collecting. On Lincoln pennies I still lack the 1909 VDB S.

55+ retirement communities and Del Webb community living are the focus of my blog at: Over 55 Community Blog