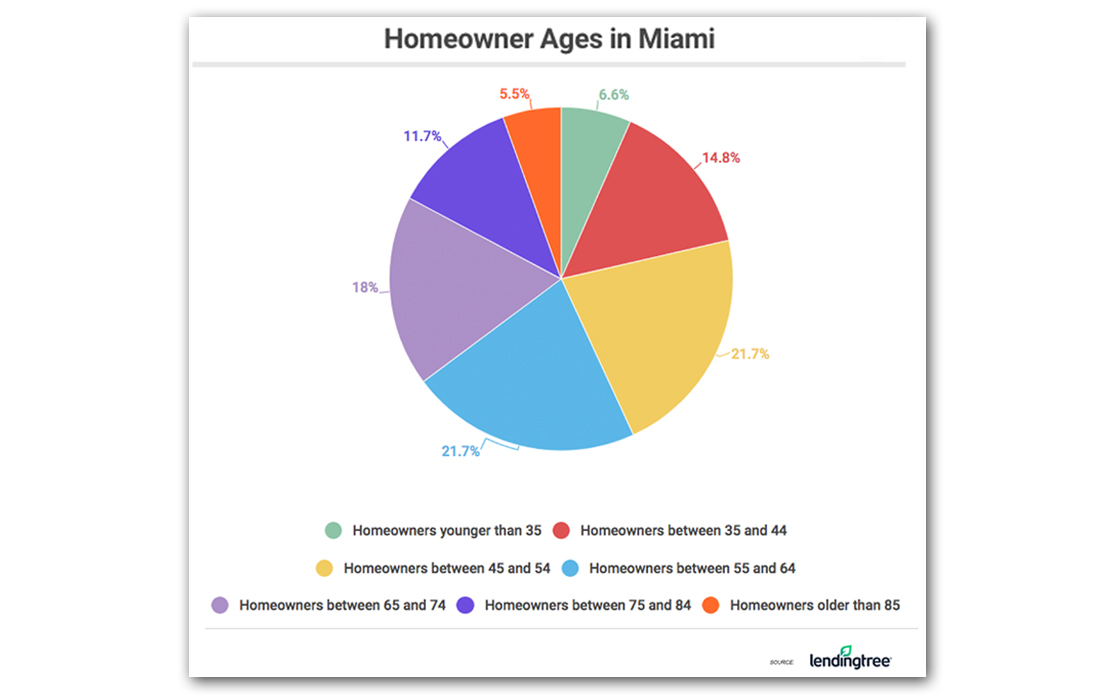 It’s no secret that Florida is the retirement capital of the country, but it still might be surprising to see that seven out of ten of the nation’s cities with older homeowners are found in the Sunshine State. We recently reported that a housing sell-off by baby boomers will potentially cause a national housing surplus, but in Miami, where inventory of affordable single family homes is already low, young families are perched to snap up homes in coveted neighborhoods with highly ranked schools. Ten thousand baby boomers reach retirement age each day, a statistic that will continue for the next 20 years.

Many people look to Florida for their retirement due in part because developers are catering to them by way of planned communities. According to LendingTree Chief Economist Tendayi Kapfidze, builders in Florida customize developments to meet the demand from retirees, which don’t exist to the same extent in other cities.

The average homeowner in Miami, Broward and West Palm Beach is 57.4 years old, according to the LendingTree report. Only 6.6 percent of house or apartment owners in these South Florida cities are below the age of 35.

Many millennials cite low wages and difficulties securing funding as a top reason for low home-ownership among their demographic. Others simply don’t prioritize home ownership in the same way generations before them did. Easy and affordable rentals, as well as options for co-living, have become attractive options for millennials. In downtown Miami, X-Miami, developed by PMG, offers rentals by the bedroom. The shared spaces, similar to WeWork and other shared office space concepts, can each accommodate up to 3 residents with their own private bedroom and bathroom. The X Miami building also features other common areas for all residents, including bars, pools, gyms, dog parks, social halls and co-working spaces. With so much to offer with little investment and no risk, it’s not surprising the development is nearly at capacity.

Since the last Great Recession, Americans are looking at home ownership differently. While homeowners were betting on appreciating values of their homes, many wound up loosing everything when the recession hit. The popularity of HELOCs (home equity line of credit), or second mortgages, allowed homeowners to use the value of their home as a virtual piggy bank. When home values plummeted, many owners realized they were underwater on their mortgage – meaning they owed more on their mortgage than the home was worth. Some homeowners simply walked away from their investments, and even worse, others unable to pay were faced with foreclosure.

According to the LendingTree report, the average U.S. homeowner age is 54. North Port, Florida, had the highest homeowner age in the country at 63.3, followed by Cape Coral, Deltona, Palm Bay and Lakeland. Only two cities among the 100 largest metros analyzed had an average homeowner age below 50 – both in Utah.

Since the last recession, access to mortgages has become more difficult. The days of sub-prime mortgages – given to just about anyone regardless of their ability to repay – are largely behind us. The effect of this is that less people are able to access funds for home ownership, but it should also limit the financial devastation if we face another economic downturn. While it was once a general belief that owning real estate was the easiest way to build wealth, it is no longer a top priority for younger generations. Older homeowners are purchasing second homes with an emphasis on the property generating income, as opposed to vacation homes. This could also be a reason Florida has a higher percentage of older homeowners, and in turn, it also increases the rental inventory for millennials to choose from.

the oldies are flocking to Florida.... active adult communities must be plentiful in Florida....