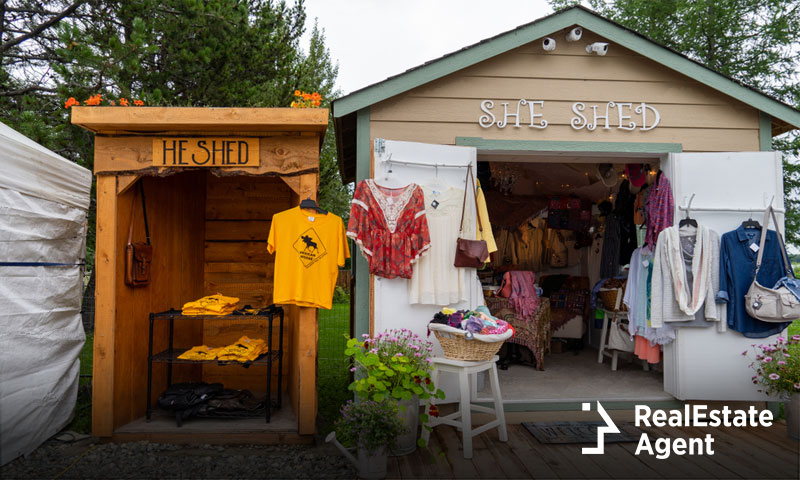 I’ve been putting off writing this one for quite a while because you know what? Enough with pairing Men and Women in a fight, as if we were supposed to be opposites. We are equals; no need for that.

However, ever since I wrote an article about She Sheds, I’ve gotten some male messages saying “Cool She Shed article, now write one for Man Cave”. And so I did. But when I did, I’ve got some male and female messages saying “Hey, nice man cave article, now write one telling which is the most sought-after; we bet is ____” – “____” was she sheds when the sender was female and man cave when it was male. And it hasn't stopped ever since. So, you know what? For the sake of my inbox, I’ll follow your orders. Plus, in the end, that desire for me to write a follow up was the one time when both genders were in tune and wanted the same thing, so I feel I’m bringing peace with this one. Let’s do this!

First off, for completely useless stats: online presence wise, She Sheds are superior. My she shed article got 1111 views as of the date of writing this one, versus 323 for the man cave one. Comments and Likes? 1 to 0, which, come on, it’s pretty bad all around. I’m counting on you both adding more comments there and trying to win this important battle. Elsewhere, when it comes to searches on Google, Man Cave has 33,100 searches a month, while She Shed has 40,500. So, guys that are pissed about it… don’t hate the player, hate the game! I guess other guys are not that worried and excited about a safe space within their home as you are.

But now let’s talk seriously and set some criteria so we can determine a victor.

Price-wise chances are that a man cave will be cheaper due to the fact that a man cave is a “man space” within the home. A room, an attic, the basement, or the garage. She sheds are specific dwellings built outside the home, usually a garden shed. And while sheds for sale can cost as low as $2,000 to build; that’s only the Vanilla shell you still need to decorate and spend money with whatever you’re putting inside. And, sure, a man cave can be extremely expensive if its owner decides to go crazy with it, adding a bunch of smart home devices or even starting a high-end operation to brew beer at home. But the median manspace will hardly require any additional insurance policies, for instance, while a garden shed will definitely call for a re-evaluation of your property in order to assess its hazard risk and that will probably mean more money to your monthly bills.

However, in terms of home improvements that increase your home value man caves will rarely add any of it exactly because it’s just another room. If you leave behind some of the equipment – like a vintage refrigerator, tap beer machines, gaming stations and whatnots – the home buyer *might* put in a few extra dollars but he can buy it all new so he wouldn’t pay much extra for it. But Garden Sheds are another story because regardless of its use, it has… use. It’s another area where the home buyer can do whatever he wants with it.

So, I don’t know. I started writing this one thinking Man cave would come out as winner, but now I have my doubts. Especially because nothing is forever, we might want to sell the house someday or even get our hands on a home equity loan… you know what? I’m ready to flip this one and call She sheds winners yet again!

Ok, this one is a definite win for Man caves. Again because of the nature of both, the fact that the garden shed is a separate structure means it’s an added expense of maintenance. For instance: if your house has air conditioning, the man cave benefits from it, right? Not the she shed. It needs one dedicated unit to it. Same with plumbing, when applicable.

And aside from the money issue; it’s an added nuisance, right? One big clean up to the house includes the man cave not with she sheds. However quick it is to clean a garden shed because of its size, it’s kind of depressing when you finally finish the house and instead of a big bubble bath you remember you have to go outside and clean the damned she shed. Yes, point for the man cave, especially if the caveman doesn’t allow people to enter their manspace for a clean up because that means less work for us, ladies. We’re all about equality, boys; let’s balance this and ensure women work less!

Well, look at that! I’m giving another win to man cave here. Listen, she sheds are outside of your home and not always sturdily built. The chances of a thieve breaking in to steal something or even some tree branch falling down and damaging the garden shed are grander than a thieve breaking into your home – which is most of the times occupied by someone – and natural disasters causing damage to it – unless the man space is inside the basement, for instance, where it’s even more prone to a flood than a She Shed installed out in the open backyard. That’s something to be on the lookout for if you live in one of the worst cities for natural disasters.

But, overall man caves are more protected because men are so fragile. I mean! Because man caves are inside the house and the house is built with bigger safety concerns than the She shed! I don’t know why I wrote that. Sorry. Didn’t mean to provoke you. But hey, you fell for it.

The last category refers to the reasons why having one or the other. As far as I know, man caves were invented before she sheds, and if we start to think about it, especially considering the time in which they were created, there’s no reason for a man cave to exist. Why do men need a “safe space within their home” when the whole world is theirs to take? It’s kind of silly. Why call it a man cave? Just call it a “room”.

So, while both should not really exist because setting borders only push people apart, since I’m assigning winners, I’m giving she sheds once more a slight advantage because (sorry for being repetitive) it’s outside of the home, so she sheds can actually serve a different purpose either for storage, for a petit guest house, a multi-purpose place for whenever there’s an event in your backyard and several other things that you can’t do with a self-contained space within the home itself.

So, guess what: she sheds are the big winners!

What? Do you think I would give that win away? Girl power! Right, Ladies?

Tags:
she shed
man cave
she shed vs man cave

If either one of us had one of those, that is what I would expect them to look like.  So, where is the issue???  LOL

You mean men caves inside, she sheds outside? It kind of makes sense, doesn't it? Lol

Why do I always think of Sheryl when I think she shed lol.  Anyway great blog ... thanks for sharing!

Thank you, Norma! Yes, me too! That StateFarm commercial really made she sheds more popular, I guess.

She Shed or Man Cave, both are good to have if one has the ability to have one. Having a space to express ones creativity or just getting away of some down time is a good thing.

I couldn't agree more, Bob! Thanks for taking the time to read my blog!