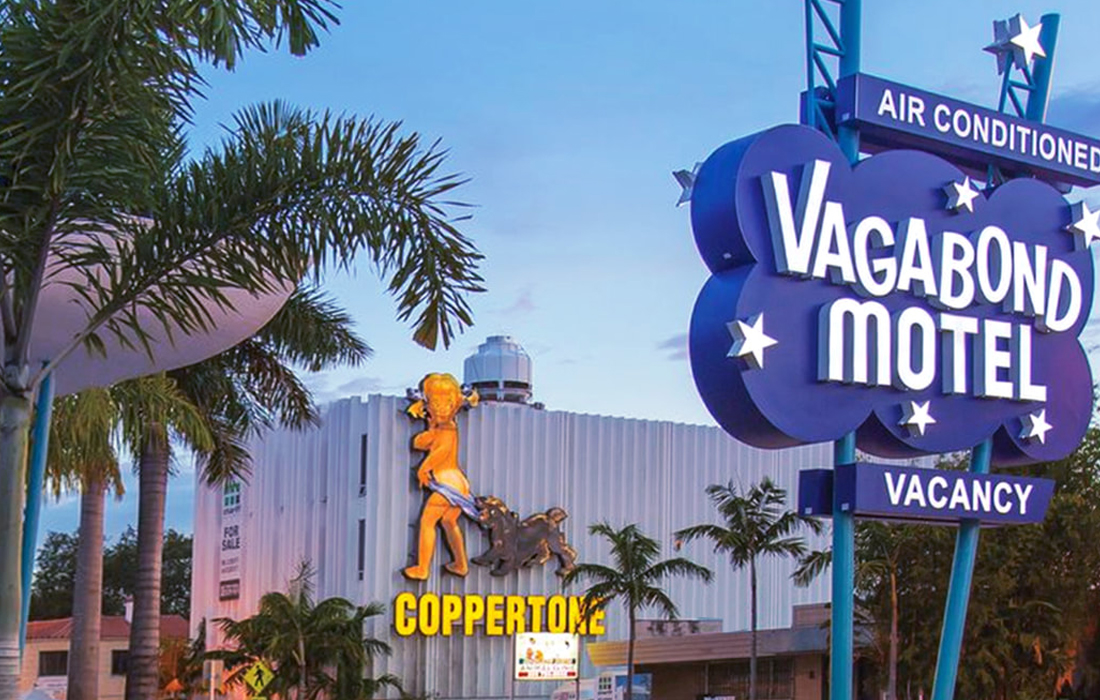 Miami’s Upper East Side is quickly becoming one of the most sought after neighborhoods in which to live in Miami. Located between Little Havana and Little Haiti, the area is not only surrounded by culture, but also has the added bonus of being one of the closest neighborhoods to the water outside of South Beach. In addition to multi-million dollar mansions nestled among smaller cottage style homes is a collection of historic buildings and low-rise motels, seldom still found in other cities, or even other parts of Miami.

Just like the art-deco neighborhood of South Beach, the reason these areas along Biscayne Boulevard have gone relatively unchanged is because preservationists want it this way. In addition to the unique “MiMo” (Miami Modern) architecture, the reason there had been such a fight to preserve these buildings and motels is because of the huge impact on our society that they represent.

The buildings constructed along this wide corridor illustrate Miami’s changing fortunes; its changing demographics and the how they helped shape the character of this now famous thoroughfare.

BISCAYNE BOULEVARD IN THE 1950’s

The construction of Biscayne Boulevard from Downtown Miami northward did not begin until 1925. Built mainly to connect new residents of what is now Miami Shores to the Downtown district, Biscayne Boulevard quickly became a vital transportation artery, especially because it met up with US 1, the main North-south route leading from Key West to Maine.

Though the Boulevard was completed in the early late 1930’s, there are very few buildings that date from that time due to the focus on residential as opposed to commercial construction. It wasn’t until the end of World War II and the 1950’s resurgence that America was able to escape the depression of war and started heading out on the roads.

To accommodate the droves of passenger cars coming into South Florida from the north, boutique lodging facilities began popping up. In 1956, there were 24 million passenger cars; by 1958, there were 57 million car registrations. Motel operators across the country promoted themselves as exotic associations that promised to fulfill the fantasies of travelers.

The word “motel” is first thought to be associated with the Milestone Mo-tel in San Luis Obispo, California that opened in 1926. The word “motor” combined with “hotel” inferred that these accommodations were designed for the highway traveler. During the early development of the industry, there were also a number of other names given to these highway adjacent lodges, including: motor court, tourist court, motel court, hotel court and cottage court.

Motel designs, which can still be found on Miami’s Upper East Side, show how pivotal the highway travelers were to their business. Designs had to account for parking spaces for each automobile, and often were organized so that the rooms were together in a linear arrangement under one roof. Buying a car was a big deal – to suggest that someone park their new asset in some lot down the street would have seemed foreign. Guests expected to have their vehicle outside their door to keep it in sight, and so they could still access the necessities they were traveling with. Additionally, rooms were often arranged around a central motor court where the swimming pool was also located.

Just as is the case today, with numerous choices popping up, hotel owners sought to have their business stand out amongst the competition. Around the same time as Biscayne Boulevard was being built, French inventor Georges Claude brought his invention of the neon sign to the United States. By the 1950’s neon became affordable enough for motels to strap the glowing glass tubes to huge signs on vertical poles to attract travelers. This collection of bright rainbows created collections of businesses, known as “the strip,” which was a section of road that people went to not just went through.

Today, many of the iconic motels of the Upper East Side have been declared historic by the City of Miami – meaning they are likely to maintain the same exterior and architectural features as they have today. However, in some cases, developers who convince the city they have something more valuable to offer than a dilapidated motel have been able to successfully replace the motels with new modern buildings – such is the case with the gleaming Starbucks that now stands where Stevens International Motel once was on 63rd Street & Biscayne.

In addition to the motels, there are also several residential homes and commercial businesses that are being preserved. The General Tire Building at 5600 Biscayne Boulevard was design by prominent Architect Robert Law Weed, who also designed much of the University of Miami campus in Coral Gables. The building is now home to Andiamo Pizza, but the architecture remains largely unchanged. Across the street, the residence at 5601 Biscayne Boulevard (445 NE 56th Street) built in 1929, was originally a textbook example of an elaborate Mediterranean Revival design. Today, its conversion to an office use has led to the elimination of windows and loss of details.