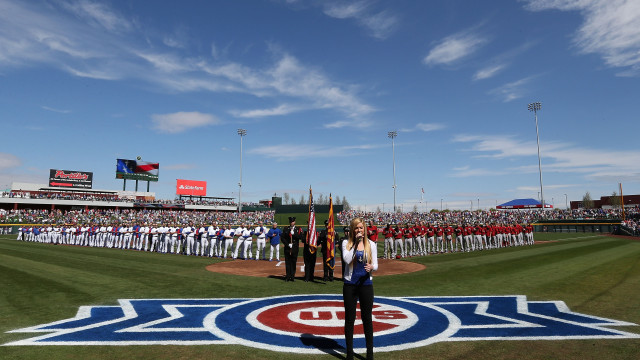 "Pitchers and Catchers Report to Spring Training" in Scottsdale and around Arizona this week. Those joyous reports in Eastern and Northern cities in their newspapers and local TV stations give hope to the wintered weary that Spring is getting closer.
If you are getting tired of the "Polar Vortex" action in your home state, there are Arts Festivals all around the state during February in Scottsdale and Arizona. With signs of Summer, major league baseball and Spring Training begins. It may be time to hop on a plane and see the "Boys of Summer" stretching, playing catch and up to their normal Spring drills. Pitchers & Catchers report to Spring Training in February at baseball camps in the Phoenix metro area
Oh Joy! The Boys of Summer return for Spring Training
Examples here and many more Things to Do in Arizona on this link.
For just a sampling of the things happening around Arizona check the following list and the dynamic links that follow the list for even more things to do around the state.
Reebok Ragnar Del Sol: Wickenburg/Mesa
http://www.runragnar.com/event-detail/relay/delsol
Wickenburg/Mesa, AZ

Teams of 12 (or six) run an overnight relay from the Wild West town of Wickenburg to the Phoenix area, finishing at Riverside Park in Mesa.

The Scottsdale Ranch Community Center (10585 N. 100th Street) hosts an art show, sale and silent auction from 10 a.m. to 4 p.m. The artists are a local group of artists who live in and around Scottsdale Ranch. Proceeds benefit local charities....

The Orpheum Theatre hosts a 2:30 p.m. screening of this silent film starring Rudolph Valentino, with live accompaniment by world-famous organist Brett Valliant on the Orpheum's Wurlitzer theatre organ. Tickets are $15-20.

The Yavapai College Performing Arts Center (1100 E. Sheldon Street) hosts this 3 p.m. concert featuring Valentine's Day-themed selections. Tickets are $25 for adults and $5 for ages 18 and under.

From 6 to 9 p.m., The MonOrchid hosts this global fashion show featuring the passion, art and empowerment of refugees. Proceeds support families rebuilding their lives in Phoenix. Tickets are $50-75.

From 10 a.m. to 2 p.m. at the Scottsdale Civic Center Mall (3939 N. Drinkwater Boulevard), this family- and dog-friendly event benefits Canine Companions for Independence. The day will include vendors, raffle prizes and much more. Free.

This American Cancer Society event, starting at 7 a.m., is a 5.5-mile hike up Summit Road at South Mountain Park. Proceeds from the $40 registration fee go toward cancer research.

From 10 a.m. to 5 p.m. both days, enjoy a free, self-guided tour of open ceramic studios and exhibitions by selected potters and sculptors from around the Valley and state. Visit website for tour map and listings.

Coronado Park (1717 N. 12th Street) hosts this Coronado Neighborhood Association event from 10 a.m. to 4 p.m. Tour some of the neighborhood's most interesting historic and modern homes, and enjoy vendors, a beer garden, food trucks, music and...

Scottsdale, Phoenix and Around the State of Arizona
Looking to do some other things in Sunny Scottsdale, Phoenix and Arizona? See these dynamic sources that are constantly updated here and loaded with "Things To Do" in Scottsdale, Phoenix, Tucson, Sedona and throughout the state of Arizona.
Check in often for the latest things to do and see in the "Grand Canyon" state. Live, play and explore. Choose among urban activities, festivals, events, sports, recreation, and dining or explore the awesome beauty throughout Arizona. The awesome desert southwest awaits!
Arizona Highways- Things To Do Search by date around the state

Scottsdale- Things To Do

Tucson- Things To do - Dynamic and updated daily

If you are looking to move to Phoenix including Scottsdale or to buy a home in Arizona or sell a home in Arizona, contact Jeffrey Masich, Associate Broker and Realtor. I would be pleased to help you and look out for your best interests while finding you the right home at the right price!

Go Beantown! Barbara Todaro.  When I was a kid growing up in New York, waiting for that news that "Pitchers and Catchers Report to Spring Training" gave us hope that winter would soon be over, although it certainly did not look like it outside. Spring and Life returns. Seeing Mickey Mantle and Elston Howard warming up in Spring Training with palm trees swaying in the back ground...Oh Joy! Jeff

Go Beantown! Barbara Todaro.  When I was a kid growing up in New York, waiting for that news that "Pitchers and Catchers Report to Spring Training" gave us hope that winter would soon be over, although it certainly did not look like it outside. Spring and Life returns. Seeing Mickey Mantle and Elston Howard warming up in Spring Training with palm trees swaying in the back ground...Oh Joy! Jeff

My dad had a private plane and we would fly to Kansas City when the Yankees played because The Mick was my hero.

We get rentals on VRBO in Jupiter Florida because of spring training. I look forward to it as a sign of better weather.