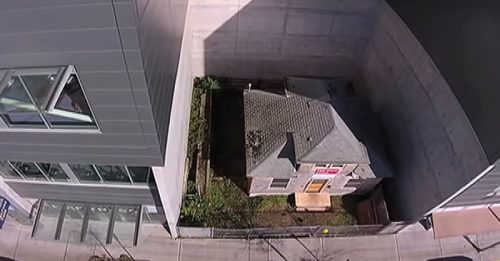 Few people in this world know resolution like the late Edith Macfield. She owned a house on 1438 NW 46th St., Seattle, Washington. It became famous when she refused $1,000,000 for it from a developer who later conceded defeat by constructed a mall around the home. The house still stands on a plot of land, tucked in the side of the mall. Edith died in 2008, but her legacy still stands. She had left the home to Barry Martin, a construction chief who had become her friend and helped her in her final days. He had originally intended to turn it into a memorial, and began renovating it, but the project got cut short. At this time, an anonymous seller is attempting to auction off the home. No one wanted to incur the $300,000 in liens, so the original auction effort was a bust. However, the liens have now been dropped. Regardless of what happens to the house next, it has been forever memorialized in the Pixar movie, “UP.” Bravo, Edith Macfield!

Via The No B.S. Broker

Wow, that is an interesting story, I will be curious about what happens next.

Hello Reshawna - although I didn't know this particular story I have heard similar examples over the years of homeowners refusing to sell for various reasons.  It makes you wonder(or at least me):  Coulda-Woulda-Shoulda

I've heard this story! Gives all new meaning to "Hold Your Ground"!!