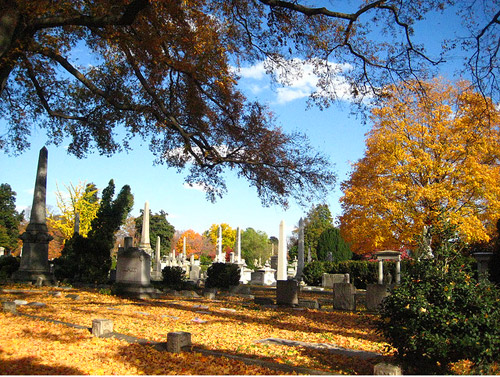 I know you will be surprised to find that this Cemetery is the final resting place of two (or three) presidents, one vampire, and 18,000 Confederate soldiers. Overflowing with hauntingly beautiful funerary statues, Hollywood Cemetery attracts photographers as well as those out for a Sunday stroll among the rolling hills overlooking the James River and the downtown Richmond area. It offers scenic views as well as poignant spots for reflection in the Gothic landscape.

The cemetery was designed in 1847 and opened in 1849, 12 years before the Civil War, which would eventually provide the cemetery with an ample supply of residents.

Hollywood Cemetery has been a fully operational cemetery since the 19th century. Established as a garden cemetery, its natural landscape and beautiful architecture quickly became a haven for Richmonders and continues to draw visitors from around the world. Throughout the years, it has become much more than a cemetery -- offering a living story in stone, iron, and landscape to its visitors from near and far. Lots, crypts, and niches are still available for purchase throughout its rolling hills and valleys, so you can take your place in history among presidents, generals, authors, and other famous notables.

Hollywood Cemetery was designed in a rural garden style to escape the grid-like monotony of city cemeteries. A major feature of the cemetery is its many stately trees that were left untouched by landscape designer John Notman. Garden cemeteries were designed with the living in mind and meant to be a haven for people to escape the city and enjoy a peaceful setting. Hollywood Cemetery's paths wind over 135 acres – through valleys, over hills and beneath stately tulip poplars and white oaks. There are over 2,000 trees in the cemetery today; many of which predate the cemetery.

What most people do not know is that Hollywood Cemetery also contains some of the best examples of native trees in the Commonwealth of Virginia. Although they are located in a cemetery, these historic trees are alive and well and shade the grave sites of many famous notables.

Some of the outstanding examples include the largest tree in the cemetery, a 78” DBH Tulip Popular, a 140’ tall Bald Cypress and, the most beautiful tree, a 45” DBH Black Gum in the middle of the cemetery, a showstopper in the fall.

The 135 acres of garden-style grounds serve as the burial place of two U.S. Presidents (James Monroe and John Tyler). Confederate President Jefferson Davis is also interred here. A memorial in the shape of a 90-foot stone pyramid looms over the graves of over 18,000 enlisted Confederate soldiers. Confederate Generals J.E.B. Stuart and George Pickett are buried here.

Hollywood Cemetery has also been used by teens and college students who slip in at night (especially on Halloween) to view the mausoleum of W.W. Pool, Richmond’s resident vampire. Legend has it that after a railroad tunnel collapse under nearby Church Hill in 1929, a man-like creature covered in blood with jagged teeth and flesh falling off his body was seen heading into this mausoleum. The legend has since been debunked, but that doesn’t seem to stop the rumors or the visitors.

I have visited this cemetery several times.  It is interesting to read the inscriptions on the tombstones.  Also the beautiful carved details on the older stones. Amazing plants, trees and landscaping is a wonderful experience.