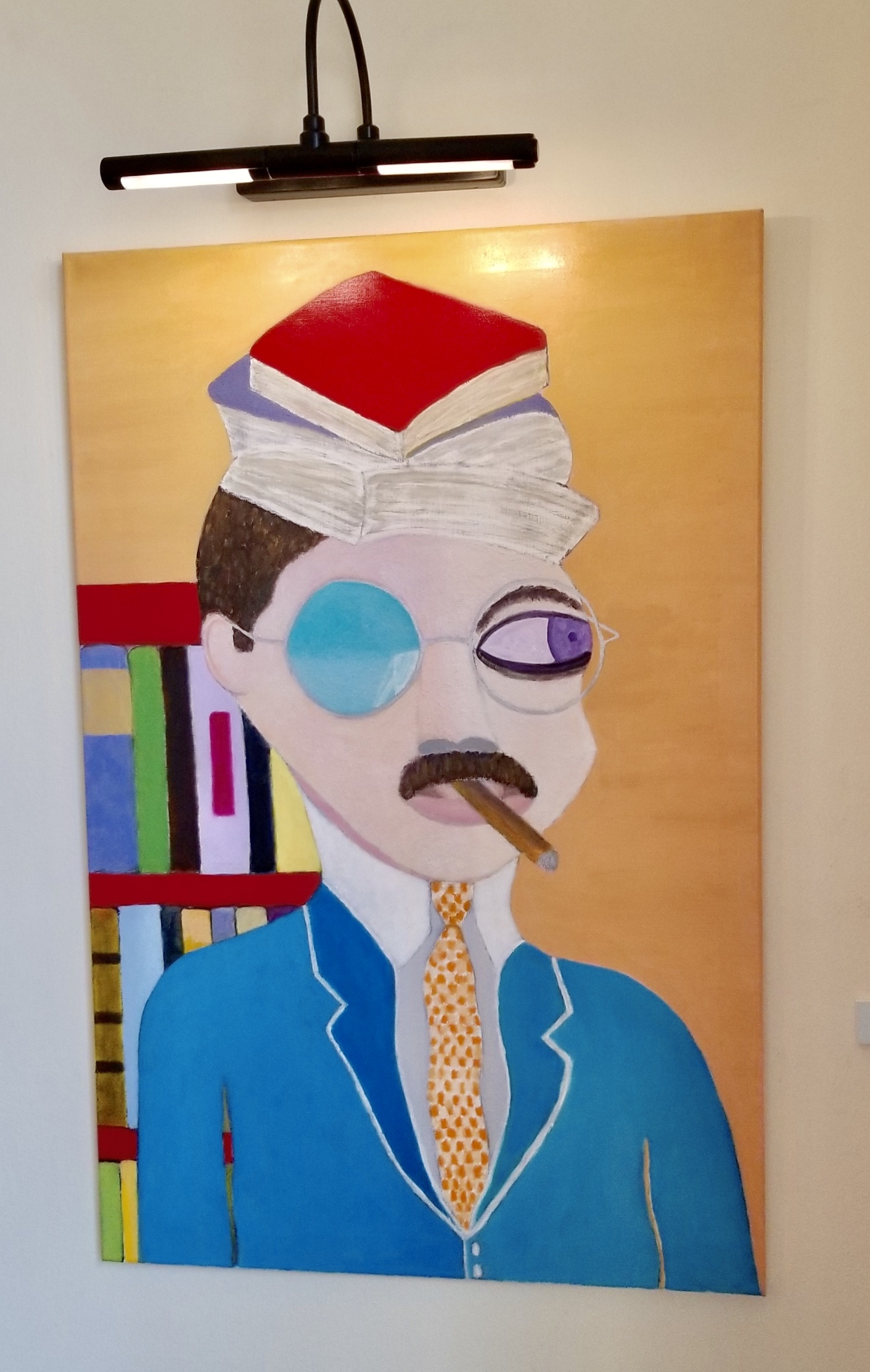 The original oil, on linen was painted in the 1950’s under Castro’s regime, and has long been a

subject of a great deal of controversy.  The man in the painting is believed to actually

Although the man in the painting has never been able to reveal his true identify,

there has been much speculation regarding his identity and present whereabouts.

During John F. Kennedy’s presidency, and the 1962 Cuban Missile Crisis it is

a major role in negotiations during that time.  Because of the sensitivity of those

Prior to going underground, Libro Smarto led quite a flamboyant life and enjoyed

his notoriety immensely.  It was also rumored that he was involved in a torrid love affair

with an unidentified Hollywood celebrity who was also linked to Fidel Castro at the time.

There were many rumors as to the identity of the famous American actress,

but sadly her name was never actually revealed.

Libro Smarto has not been seen or heard from for many years, and is most

high quality cigars throughout the world.

As one might suspect, there have been many forged copies of this famous painting but

on display and can be viewed daily.

** Please note: This is a purely fictional story written by Joyce Marsh for submission in the contest by

Paul Julien Freed's body of work is a narrative through color and dynamism.  It is an extension of his impactful history, both in a personal sense and by way of his professional background in film and photography.  Paul's seemingly instinctive style of painting enables him to explore a perspective that flows naturally through deep rooted creative interdependence.  Paul's recent exhibition at Chateau Marmont in Los Angeles is, in part, a display of his connection to the hotel.

Will Hamm Thanks very much.  I was actually laughing when I was writing it too.  I appreciate your nice comments.

Chris Ann Cleland yes, definitely check it out.  There are so many good entries.  I'll be looking to read yours.

Thank you Michael Jacobs  I'm so glad you enjoyed reading it.  I really appreciate your comments.

Endre Barath, Jr. Thank you very much, and thanks to you for hosting this fun and creative contest.  I'm really enjoying reading all of the entries.

Roy Kelley Thanks very much.  I'm glad you read and enjoyed my take on this.  It has been fun reading all of the other entries too.

Thank you Grant Schneider I appreciate that!  Are you entering?

Paul S. Henderson, REALTOR®, CRS now that would be something! Wishful thinking! Thanks!

Oh, what fun, Joyce! I love your take on this - Libro Smarto indeed!

Love it.... I am not much into art but your take is great.  I love the flamboyant life part!  Thanks for sharing.

Good morning Debe Maxwell, CRS Thanks for stopping by! I'm glad you enjoyed my version.  This contest has been a lot of fun

Hi Norma J. Elkins I'm really glad you enjoyed reading my version of this.  I had a great deal of fun writing it and creating this character.

I totally agree - we need to have one of these every month - lots of great entries with quite different interpretations of the artwork.

Joyce Marsh - You have a vivid imagination and the talent to craft a great suspense story! I like the mystery in this one!

I guess one might expect some Cuban inspiration with that Cigar...not sure that Smart and Cigar belong in the same sentence...!

You had me going Joyce Marsh , I really thought you knew the real story behind this man, haha.  Great story!!!

Ha Ha Brian England  !! Glad you enjoyed my take on this! Oh and by the way I just found out it was your birthday today!  Hope you had a great birthday and were able to do something very special today!

That was a fun story! It could all be true!

Joyce, You may have missed your calling! I could not stop laughing at the nam...Libro Smarto...perfect!

Apr 04, 2019 07:23 PM
LIKE
1
#38
You must sign in or register to leave a comment
Login Register
Show All Comments
Older Post Newer Post
Back to Top
Generate More Leads from this Listing
With a Trulia Pro Account
Learn More
Find what you need?
See More Blog PostsAbout Real Estate! SEE MORE NOW!
Rainmaker
1,189,548