hi i'm jay seville the owner of
wilmington-real-estate.com.  I'm going to talk to you quickly about the Surf Suites condo in Wrightsville Beach some call it the surf Motel condo and that's because in the MLS that's its official name, but somewhere along the line it

became known as surf Suites in Wrightsville Beach at 711 South Lumina this is a condotell. what's a condotel? A condotel is a condominium where all the individual all the units are owned by different owners. Often in these buildings one owner will own two or three or four units because they're successful financially with a good return on investment.  But it's run like a

hotel so people call in to the front desk in reserved rooms that way. and probably 95% of the bookings or more come from direct phone calls to the front desk and the management company on-site at surf suites and other condotels what they do is try and disperse the rentals evenly among all the owners and it's sort of like a round-robin if people request a certain room or a

certain level then of course they are accommodated. But as you can imagine these are often full so if there is a first floor available people jump on that and it stays full all summer you know and that's why the system works eally well After 2019 Renovations for Surf Suites condo

shut down it still shut down house of April 2019 they're hoping to open in May for rentals again. essentially this is going to be a new construction oceanfront condominium in Wrightsville Beach which we have not seen for a long time other than a luxury duplex which I was under contract for by the way for 2.2 million but that's irrelevant. these units are all homogeneous meaning the management company is in charge of the design and they keep them all identical o each other. whereas at Shell Island Resort individual owners could do whatever they wanted on their interior and there's a report card system there of levels in each. it's a rental rate but at Surf Suites they all are identical the building.

essentially has been gutted so right after the hurricane emergency personnel was called in to minimize damage but what they found is that a lot of water was not noticed originally was going to require more extreme measures. so walls have been taken out. ductwork has been replaced. a lot of piping's replaced floors, replaced kitchens are replaced by new bathrooms. It's

completely a new construction condominium now, and when you walk in there you get the new home smell immediately like you would get by any builder anywhere. so with that in mind there going to be some new values for these properties. this condo has never gotten the respect it deserves because it's always been --at least for many years--since I mean they're a better investment property than Shell Island Resort. but it didn't get the respect it deserved and most people are unfamiliar with the south end of the island which has some serious advantages compared to the north end. you're you're next to the oceanic

restaurant a walking distance away. you're also walking distance to downtown Wrightsville Beach with all of its retail and shops and energy busyness there's some big advantages on the south side here's what they used to like look

I'll show you before and afters let's see so this is the the bathrooms from before as well as the kitchens from before. okay and I'll show you another one this was interior before and the bathroom before okay. so they all look identical this other one was cancelled as well. same same exact kitchen. and same if I can find the bath bathroom so that's the before and after picture so now the new bathrooms will have this. I believe it's marble - tiling inside of the bathrooms and they will have this new flooring called LVP and it's like a a driftwood a great driftwood color that also hides scratches really well because it's distressed. these are also a lot of the new floors that show island resort word this word this and it's common now new

I'm in the the new kitchen I mean as you can see it's good new cabinets, new flooring... everything's gonna be brand new. so what should the new value of Surf Suites condo or the Surf Motel condo? that's up in the air right now. it serves Suites condo motel in Wrightsville Beach and the market will decide as soon as we get to list some homes and feel it out. in Carolina

year or a couple of years later and it was selling essentially 20% higher than the same units just within a block or two of itself so it was selling for example at 320 while the other homes the same size two buildings away were selling for 285 so it's up in the air what the new market values will be if I get to list them probably I'll go with the top floor.... 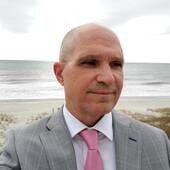