Like:
Home > Blogs > Eric Bouler > New Orleans Real Estate by Eric
The New Orleans Neighborhood
Magazine Street Next to Garden District
2512 Magazine Condos are
Between Second and Third Streets
Several Other Complexes Between
Washington Ave. and Jackson Ave.
The 2512 Magazine Street Condos are next to the Garden District along with about 8 complexes between Jackson Avenue and Third Street. This is one of only several blocks on Magazine Street after stores, eats and drinks between Jackson Avenue and Washington Avenue. This is a unique residential areas in this part of Magazine Street. You are not far from St. Charles Avenue or the Warehouse District. Congratulations, Eric, on this great new listing.  Buyers and sellers in your area are fortunate to have you working with them.   I am sure you will have this one sold quickly. Eric Bouler this property is an excellent opportunity for the right Buyer.  Congratulations on the listing.

I always enjoy the mystique of New Orleans archetecture, Eric.  And, you photograph it very well! Thanks for the comment. One of my hobbies is photos for real estate.... 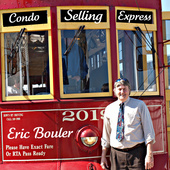