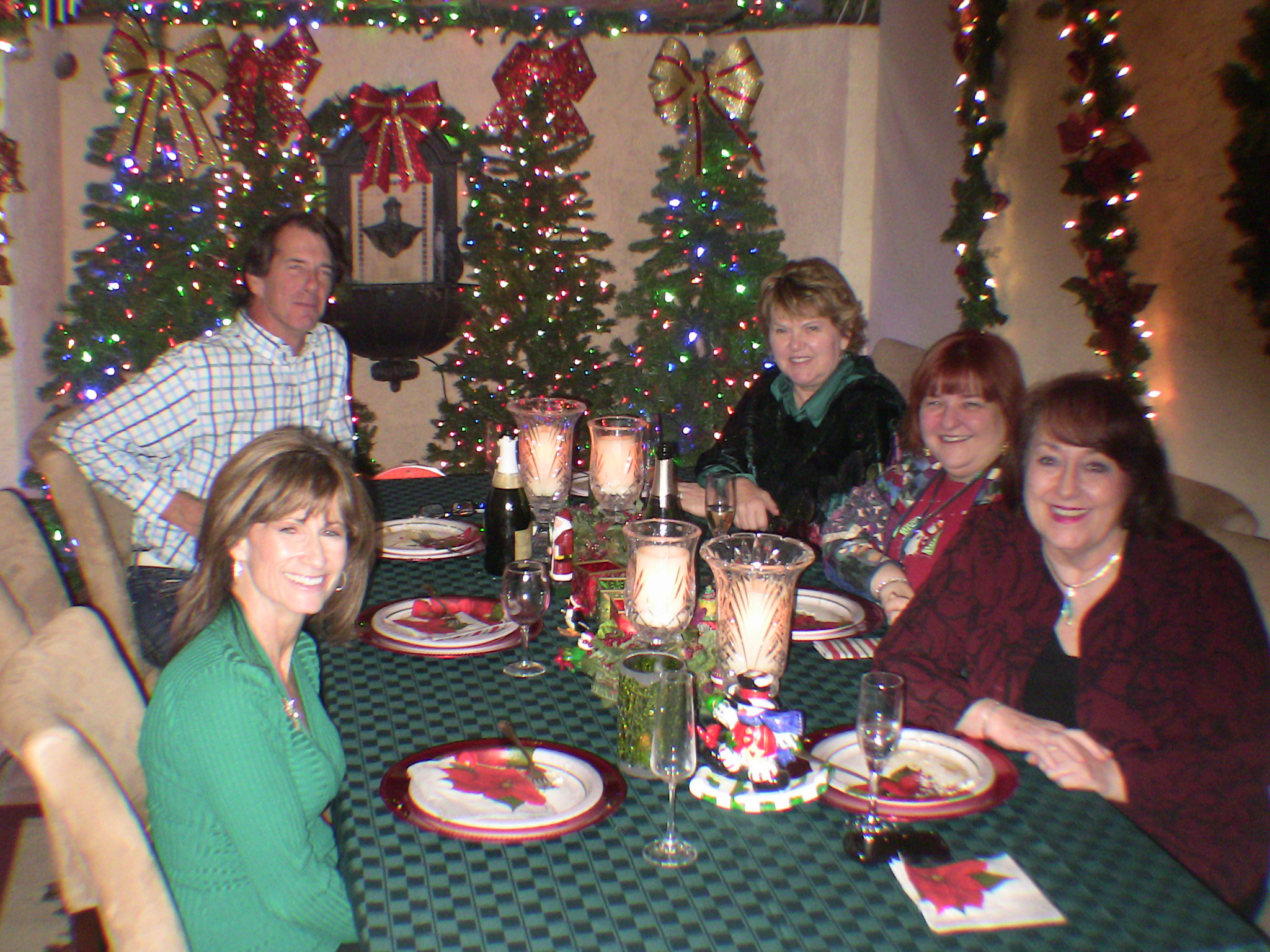 Thank you to Jeff Dowler for this contest.  Reading other Rainers interesting posts prompted me to write my own.   Reflecting on the last ten years conjures up MANY memories of my uphill battle to garner traction and recognition for homes with energy efficient features.  But also the many changes in my family and their families.  (Christmas in July photo!)

Raincamp came to Scottsdale in 2009 (I think).  Attending that event, was a real eye opener. Having tried SEO I had a clue what the site could bring to my business but I had never blogged. Timidely I started, like most, lurking in the shadows. I had no clue how to write but I did okay in English so I gave it a shot!

I use my house in my classes and public speaking events to show people they can reduce their bills like I did (71%) without installing solar.  I'm not denying the "power" of solar but I offer people choices. My bills are so low now that it would take at least 10 years to recoup my investment.

Also in 2009, I started volunteering with USGBC (still volunteer). One of my projects included creating a speaker panel course in 2011 with a lender, HERS rater, appraiser, builder and sometimes a utility company.

I officially became an instructor offering continuing education credits in 2015 on the topic of energy efficiency.    Currently,  I'm developing an advanced course with Daran Wastchak (left)  that's due out in September.  The relationships I've gained in energy efficiency are vast and across the country of which I'm very proud. I've worked to add green features to our Arizona Regional MLS twice in 2009 and 2014 and hosted appraiser courses as a volunteer with US Green Building Council. The recognition of my projects has been very rewarding.

In 2015, I rented out my 2015 home and bought a 1979 home, affectionately known as the "gutter ball."  It earned a gut remodel but is also the first Pearl Gold Certified home in Arizona.  My company got wind of that since Pearl Certification is an affiliate partner there. The press was fun! Growing an online presence has been a constant effort on ActiveRain and other sites.  One contact on Linkedin just referred me to a developer.  We've met and I'm looking forward to listing 9 new homes that will be super energy efficient! My oldest daughter just celebrated her first year as a realtor in Huntsville, AL.  I'm very proud of her hard work and sales efforts.  Having been in retail and management for 22 years, she's a natural for real estate!

This has been a perfect career shift for her and most importantly,  she's more available for her family in real estate. The freedom is great for my grandchildren!

Her stories and how she earned business are inspiring.  We laugh together at her stories and she knows she can always call me for inspiration and feedback. My other 2 daughters have married and had families during the last 10 years  I've gained 5 grandchildren and have 7 total now.  My oldest granddaughter is about to start her 3rd year in college, is engaged, and I'm so proud I could burst gaining a handsome young man to the family!

This photo in Dallas was on the top of a Federal Building for my youngest daughter's wedding reception.   My son-in-law is known as the
Hard Core Closer."  You may hear of him yet! Amy is a huge support for him.  Raising 3 boys, she's no sloucher!

My daughter on the right is now a nurse in Ames, Iowa after a stint in Alaska with AmeriCorp.

She's also a talented artist and I love hearing her stories about my granddaughter Emma who loves the universe and I know will be just as talented as her mom!

My family just completed a much needed family vacation in June, 2019.   This is the first one in 7 years where we're all together from Alabama, Iowa and Texas.  Everyone was there including a cousin on my son-in-laws side, a fiance for my oldest granddaughter, and 2 little girls of my daughter's boyfriend.  An 8 bedroom house did the trick in Gulf Shores, Alabama!  So much fun! It's wonderful to be able to host everyone that way thanks to real estate! Thanks to ActiveRain, I can say I have made more friends across the country than ever before.  I have friends in other states, but not nearly as many as those of you online and in Arizona.  The header photo was from December, 2013 at Anna Banana's home. What a treat and a good time we had.  Followed by many more! ActiveRain got me through the housing recession during those lonely slow times.  The reliable resources and friendships have been a HUGE source of personal enhancements.  Thank you to you all!

Thank you Debe Maxwell, CRS !  You're so right.  The Rainers here in the Phoenix area are amazing and I'm glad to call them friends. If it hadn't been for AR, I would have never met them.  It's been wonderful and I always look forward to seeing them. And thank you for your comments about my daughters.  They are all good mothers and wonderful friends, respecting each other.  Call me blessed!

Jeff Dowler, CRS , I would love to meet you!  My AR friends are a big part of my life and it's been great getting to know you through your posts, but in person would be awesome!  Thank you for the conest and a trip down memory lane!

Thank you for commenting and reading Myrl Jeffcoat .  I appreciate that it's not always easy to find time to write.  I wrote this in the 11th hour, hitting a networking event, and proofing again.  Still missed an added word, but just now took it out!  Next time!

It's not always easy to find time to write Buzz Mackintosh .  You can still write one as I'm sure it will receive lots of reads!

You're right Kat Palmiotti .  That vacation was planned a year in advance.  Spending hours going through which home to rent with the most king size beds!   It was such fun and I trasured every moment with my grandkids.

Thank you Nina Hollander . I wrote more about my family than the hard times of the recession.  I know some realtors that ended up with a PTSD type of illness because of it.  Instead of focusing on that, I chose to look at successes after all of that.  Volunteering during the recession was also a huge personal gain for me.  It took my mind of the sadness and foreclosures.  Onward!  Thank you for reading!

Thank you Rebecca Gaujot, Realtor® .  I do feel blessed and love spending time with my girls and their families.  It's not easy when they are so far away, but we make the most of our times together.  Thank you for reading - have a great day!

Hi Jan Green - First of all, congrats on the gold star!

As you know, I have had the opportunity to attend one of your fabulous classes so I know what a great job you do teaching.  I do remember reading about the visit on ABC and what a coup and honor that was.

You are so blessed with such a wonderful family and I am so happy that you had the opportunity to get together in June. I know how tough it is to get everyone together and create those memories that you will never forget.  Personally, to me, this is the most important thing and I am happy you included us to share in it.

Hi Jan Green love your post! You've packed a whole bunch into 10 years and look at you go.  WOW very impressive indeeed!  Love your photos of your family and kids. What a great family reunion shot!  And as always I look foward to our next mini meetup HH!

I feel the love here! Love for family, for friendships, for Active Rain and for energy efficiency. A wonderful look back, Jan. No wonder you smile so beautifully.

Thank you Sheri Sperry - MCNE® , I didn't even notice the gold star!  Appreciate you pointing that out.  And thank you for commenting about the interviews.  It was a whirlwind, 3 TV stations, 2 podcasts and 2 days in the Arizona Republic!  I was blown away.  Yes, it is very difficult to get everyone together.  Not everyone could be there the entire week, but 4 days was enough to recharge my soul with them!  Thank you for commenting and reading!

Thank you Anna Banana Kruchten CRB, CRS 602-380-4886 . I wish I had written a post for your contest.  I just kept postponing it and the next thing I knew, I was writing this post in the 11th hour of the 31st!  Hiring a photographer for the beach was the best decision.  The tall, dark hard cousin just graduated so he earned some senior photos and my oldes grandson just started his senior year so we took senior photos of him, too. My granddaughter and her fiance have engagement photos!  And each of them have their own family photos.  It was such fun :)  Look forward to seeing yuo soon on our next Mini-Meetup!

Thank you for your sentiments Lottie Kendall ! You're so right.  I love my family and being with them feeds my soul!  It was amazing and the last 10 years have flown by.  I appreciate yuo reading and commenting.  Have a great day!

Jan- I love your post and reading about your decade of growth. I also admire your dedication to energy use and making sure that we try to leave the smallest footprint that we can.  What beautiful daughters you have and so happy that your family got together in Gulf Shores!  That's where our friend in KS vacation every summer.

Thank you Kathy Streib !  Energy efficiency and everything surrounding sustainability is a big passion and I love the topic.  It's great to see that ah ha moment in a realtor or homeowner's eyes when we talk about it.  And thank you for your compliments about my girls.  I'm very proud of them and we have greawt times together.  I've been going to Gulf Shores off and on since the early 90's when I lived in Huntsville.  Lots of fun and the kids love it there.  We also went to Destin quite a bit.  Gulf Shores is easier for others to drive to but I always look up and down the beach for a great home to rent!  Thank you for commenting and have a geat weekend!

Thank you for sharing your decade...it was a great green read !

Jan Green - You look good on that set for ABC Morning News! You're an educated woman who changes wises with the decades and you're always learning something new for yourself and educating others. I really enjoyed learning more about you and I really like your family photos too!

Good morning Jan Green - you have an amazing story.  And you have a wonderful looking family.  I am glad I got to know you.

Patricia Feager, MBA, CRS, GRI,MRP  Good morning!  How your comment fell through the cracks is a complete mystery!  Thank you for such very nice comments.  You're such a doll always looking for the good in others.  Have a great day!

Thank you Grant Schneider !  It's been great communicating with you and learning the powerful coaching you do for others.  Kudos!