Today, October 10, marks 26 years since my Bug and I decided to get the hell out of LA on the heels of the LA Riots (Rodney King court case and the mayhem that followed).

We packed the van and moved into one of our family vacay condos in Laughlin, NV. My husband had ONLY been here ONCE, on a turnaround trip in September (still 'pretty hot' but not JULY HOT!)

I had been coming here since the 70s, and also spent 10 years in Palm Springs. So I knew exactly what this place was.

During that trip, standing on the Riverwalk overlooking the beautiful Colorado River, I asked him, "Well? Think you could live here?" 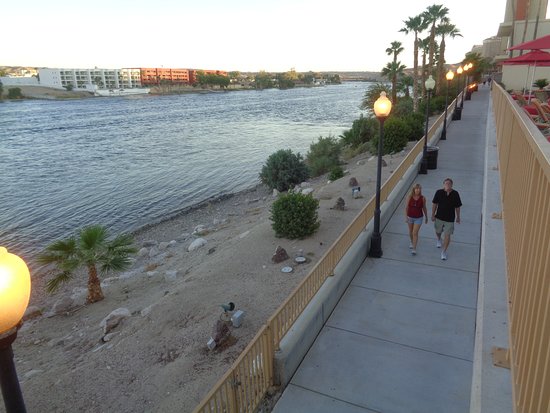 He said "It's SO beautiful, hell yeah I could live here."

He says in his FL drawl, "Ahm from Fla-duh, Ah can handle heat!"
I laughed. "Honey, you ain't EVER experienced heat LIKE THIS!"

Soo, to cut a long story short . . . we took a 1 month leave of absence from our jobs in LA 'just in case we made a mistake', and within the first week, we had officially quit and were holding hands, staring at the most glorious AZ sunsets known to man, asking ourselves what the hell we may have gotten ourselves into.

I still laugh at how Bug's first full year here was so rough for him. He didn't want to come out in the heat of the (125°) mid Summer days!

"I want to live like Egyptian royalty and only come out at night!"

(Such a drama queen!)

Fast forward to a few years ago . . . he comes home from work sweating like a pig, having driven home with the windows down. "What's the problem - AC go out in the Mustang?"

So here I am, 26 years later. With not a single regret.

🎶No special favors, make it out to cash

We'll spend it later, gotta make this romance last (that's it, that's it)

And I don't wanna go home!🎶

Groups:
Bartender, Make it a Double

I have always believed that we all have a perfect place to bloom and thrive in.  It depends on us if we are willing to find that Goldilock place.  We have ours and you have yours!  Heaven abounds in diferent places, just have to look for it.  A

Yours (indeed, the Central Coast) remains 'If I HAD to move back to CA, the ONLY place I'd want to land in'.

As a fifth generation Floridian, I can attest that 100* in one place has no similarity to 100* in the other. Glad you decided to take the leap. Life's about changes nothin' ever stays the same.

When we got married, we flew into Tampa and picked up a car, and slowly over a couple weeks made our way across the Southern US home. We decided that anywhere we felt we might like to move to, we could. I liked N'Orleans a lot and also Las Cruces NM (NOT enough to move!) . . but FL was SO HUMID! I'm a desert rat and it felt so much oppresively hotter than here!!
ALSO . . . we pondered FL again when we inherited my MIL's house. But my goofy husband said the one thing he knew would change my mind:
You know those date beetles you hate? Well here they're about 6 inches long. AND THEY FLY!   LMAOOOOO

It is so humid sometimes it's hard to take a breath. And no matter how clean you are or how often the exterminator comes, there are always Palmetto bugs (as we called them because they lived in the Palmetto trees). Makes my skin crawl just thinking about it.

I enjoy the heat as well and don't see myself ever living outside of Arizona, the winters are so ideal.

Candice A. Donofrio
I agree! The winds are brutal at times. Like today I don't even want to know where my patio furniture is LOL
Kat Palmiotti
406-270-3667, kat@thehousekat.com, Broker, eXp Realty - Kalispell, MT
Helping your Montana dreams take root

Sometimes a place speaks to us. We step onto ground we haven't been to before and we just know this is where we need to be. You found your ideal spot!

Candice A. Donofrio
And I know you get that! LOL
Michael Jacobs
Pasadena, CA
Los Angeles Pasadena 818.516.4393

Hello Candice - I am a native Californian but I lived on the East Coast for a few years.  Is SoCal the be all/end all?  Who knows.  Some say I am just a ramblin' man.

Candice A. Donofrio
I'm a native Californian too. But the California that I grew up in no longer exists. So I'm an Arizona girl!
Anna Banana Kruchten CRS, CRB, Phoenix Broker
HomeSmart Real Estate BR030809000 - Phoenix, AZ
602-380-4886

Love your story Candice A. Donofrio ! I get the heat (just not the 125) that's hot! For sure you made the right decision!

I so get it, Candice. Sort of the story of our move from NYC to Charlotte 21 years ago... and I haven't regretted it either!

Candice A. Donofrio
I loved LA but it's not the LA that I grew up in in the 60s and 70s. And never will be again. So call me an Arizona girl and I will agree!
Kathy Streib
Room Service Home Staging - Delray Beach, FL
Home Stager - Palm Beach County,FL -561-914-6224

Hi Candice- Mimi Foster is right. 100 degrees in FL (where I lived for about 30 years) is totally different from the dry heat I experienced in Las Vegas. When we're there (LV) I can't drink enough water. So glad that you found your slice of heaven.

Haha, Vegas is like here - dry and hot - but it's usually 5-10 degrees hotter here! And hydration is essential!