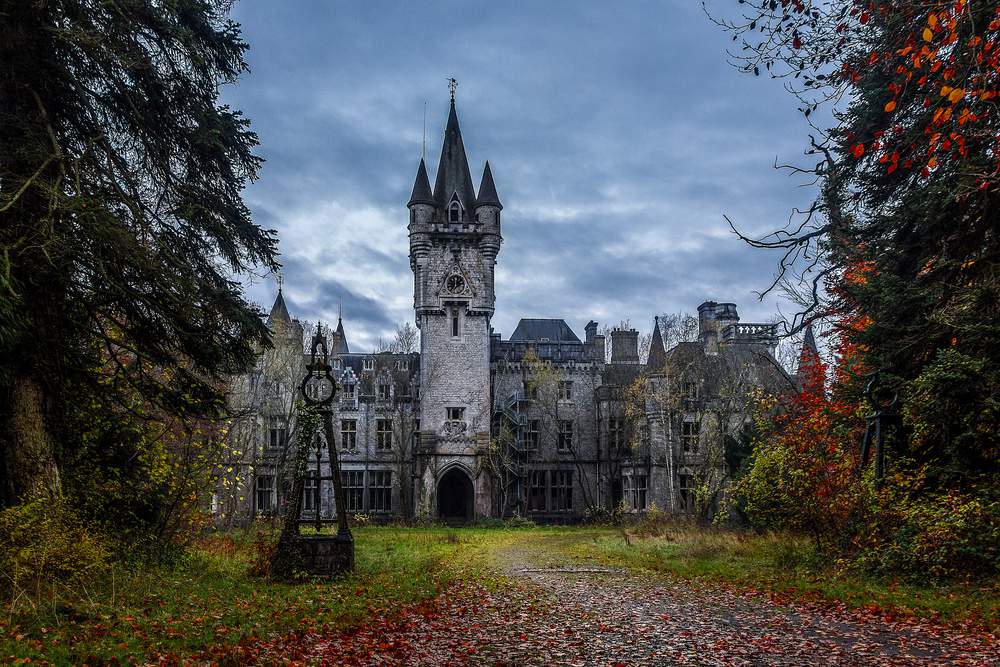 Gothic horror is probably my favorite genre with a close second being the futuristic Aliens movies.  The ingenious locations and sets developed for movies as early as 1922s Nosferatu to the Twilight series of 2007 span many architectural styles that were either on the forefront of the time of filming or scriptwriting but the truly scary flicks hearkened back to darker times.

Before the development of modern special effects, the intro shot of the castle or lair of the monster or villain was typically a painted scene, depicted in silhouette.  Most of the shooting was done on sets of broody shadowy interiors with oversized stairways and ballrooms.  As time went on real houses or castles were used with painted matte overlays aging and putrefying the location, with studio sets comprising the interiors.

I am featuring 25 or so of my favorites!  I hope you have seen many of them.  As you read this photo essay please link on one of my favorite horror soundtracks...

And here are the movies, by the dates released:

I must start with a completely true horror story, one of which I submitted last year, that took place in 1914 -- before any of the movies described below.  No film was ever made of this event but it occurred in the house of this country's most celebrated architect... In 1922 the world's first vampire movie, Nosferatu, was filmed in Germany by F.W. Murnau.  The sets were 'expressionist' and echoed a bit of the cubism and avant-garde style of Picasso. Tilted sets created a phantagoresmic effect... (left)

Fritz Lang directed Metropolis in 1927 -- also using dark sets, and the urban landscape was a mix of futurism, gothic, and art deco combined. (below) In 1931 filmgoers were entranced by Bela Lugosi as the creature in Dracula, a Bram Stoker classic that like the upcoming 1935 Bride of Frankenstein, based on Mary Shelley's book, depended on angular interiors and Gothic-inspired buildings per the period depicted. (see below, groin vaulting, the oversized dramatic grand stair) While not a horror story necessarily, the set for Citizen Kane shot in 1941 (below) cast a broody shadow with its almost Babelesque exterior and completely oversized interiors -- similar to the style of the sets from Nosferatu, inspiration for horror productions to this time. All the previous films were shot in black and white, the first two were silent. The first color horror film of note whose sets were mostly in matte technique was Horror of Dracula, a Hammer Film from England released in 1958, which featured one of greatest talents for the role, Christopher Lee.  Hammer studios would film at least two decades more of variations of this genre which was not slapstick but dead serious.  These are the best early gothic horror flicks that are 'talkies' and in color.  Lee's tormentor was Peter Cushing, another great British actor who played the villain's opposite in many more horror movies. The castle exterior, above left, is a combination of a studio set structure on right with matte stonework spliced in on the left. In 1959 Alfred Hitchcock gave us North by Northwest, a smart chilling thriller of mistaken identity, and the director showcased a matte created highly modern house for the villain's lair close to Mt. Rushmore.  This was the first contemporary thriller of this type to depart from the gothic brooding stereotype.

Vincent Price starred in 1959s black and white The House on Haunted Hill.  This was a strange juxtaposition of Wright's famous Ennis House in L.A. during the opening scenes but reverted to a rather uninspiring 'gothic' interior for the remainder of the film.  The 'why' escapes me.

Allen Poe's short story Fall of the House of Usher, filming in color, to tell the tale of the owner of a decaying house whose conscience reveals that he buried his wife alive.  The interiors and exterior sets are nicely paired.  Here we have some sort of American Tudor castle that burns to the ground at the end. In 1960 Alfred Hitchcock once again shocks filmgoers with the acclaimed movie Psycho.  The Italianate Villa perched on the hill is one of the best-known residences in film history.  The interiors are also expertly created in the studios of Hollywood.  This was one of the first 'slasher' flicks.  Also filmed in black and white.

Roman Polanski took a stab at the Dracula legacy in 1961

The Fearless Vampire Killers and created a truly creepy but tongue in cheek take on the genre.  This was one of Sharon Tate's last films.  The vampires were very good, the interiors convincing, while Polanski himself and his professor are cast as bumbling ignoramuses. The castle, unfortunately, from a distance is quite poorly illustrated as a matte scene (above right).  The soundtrack, a mesmerizing drone, is brilliant and will make you stay awake for days... Electing also to go back to black and white for psychological effect, 1963s The Haunting is a famous psychological horror movie that uses a ''Gothick" British 'pile' located in Ettington Park (left) as its backdrop.  The interiors are studio created and are convincing.  The facade is panned several times with great effect to pronounce the horror.

Another black and white drama, similar in concept to The Haunting, was The Legend of Hell House, shot in 1973 with again an English West Sussex manor house as its setting.  Of course, the interiors were all studio creations.

In 1975 the campy cult Rocky Horror Picture Show (below) was more outrageous than scary.  The English manor house used for the exterior is a nice 'pile' built in the Windsor area. One of the early truly scary contemporary movies, a first centered on a young family moving into a haunted house, was filmed in 1979, using a modified replica house of the original murders, at Tom's River, NJ.  The Amityville Horror, based on a true story, struck fear into the hearts of typical young rural families due to the simple settings and general normality of the depicted lifestyle.  The house was some kind of Americana Gambrel style. (below right).  Poltergeist, in 1982, picks up on the idea that horror is not relegated to eerie castles in foreign lands but can occur in the drabbest of American tract house subdivisions. The Overlook Hotel was the model for The Shining, a true horror classic released in 1980, with ghosts and a nefarious history that made Jack Nicholson's character go mad and prey on his own wife and child.  Shot ploddingly in color, the interiors were well fashioned in the studio to match the turn of the century Victorian exterior.  The exterior maze was a brilliant juxtaposition to the repressive interior filming. (below) The Ennis House was also used for many interior scenes in Ridley Scott's acclaimed Bladerunner of 1982.  I actually met one the artists, Syd Mead, in Houston who created the matte scenes for the futuristic city.  (below right) Beetlejuice, released in 1988, was not really that scary but was notable for architects as this was one of the first Post-Modern single-family homes ever featured in this genre.  It actually appears that the PM was slapped onto some kind of Cape Cod Victorian mishmash. (below)

In 1990 we see one of the first movies depicting a suburban dystopia in a sort of sci-fi horror character fiction.  In Edward Scissorhands, the evil protagonist lives in some kind of set designer's nightmare concoction -- a mishmash of a Tudor Gothic Medieval monstrosity. (below)  It appears to be an actual hand-built model filmed greenscreen. A more elegant depiction of a haunted house is The Haunting, filmed in 1999 with Harlaxon Mansion as the setting.  The entire interior set, which is where most of the movie is played, seems to be a combination of studio work and CGI effects.  Walls, floors, all move and change.  This is really interesting to watch just for the special effects! (below) Eddie Murphy yucks it up through this campy horror takeoff filmed in 2003 named The Haunted Mansion.  The exterior is a totally airbrushed southern fried Venetian/Gothic/Roman temple mess. (below right) The present-day take on the vampire genre was updated in 2007 with Twilight.  Combining the age-old story but reincarnated in modern times, the vampires love their sunny bright ultra-contemporary house in the woods.  Really? In 2015 a lot of money seemed to have been poured into some very convincing sets depicting the late 1800s west during Victorian times.  The interiors are very well done and one keeps staring at the exterior of this fine concoction called Crimson Peak. (below exterior and interior) Netflix, in 2018, introduced the Haunting of Hill House series which combines 'Tudor' and 'Castle' in a rather unlikely mix.  The scale is not correct in the matte painting used as the main house but this matters not much as the effect of horror is achieved for a public that by now has no idea what style is what. (below left) So, here we stop with almost 100 years of film gore and architectural malevolence!  I know some of your favorites are not in here, so let us all know the ones you remember that had a significant architectural set! I hope you enjoyed the show!  The beautiful featured castle at top, vintage 1800s, was converted into a mental asylum, located in Belgium and is deemed haunted... These suburban castles were created for rich merchants of the time who seem to have been stuck in yesteryear's romantic fantasies.  From these Gothic extravaganzas to 'everyone's house' (Poltergeist's drab cookie-cutter California suburbian faux Tudor below) filmmakers have managed to scare the bejeebers out of us. It is an appropriate time to share the stories of haunted properties and the movies made from them.  I can remember seeing a few of these but never knew the history behind them.

Hi John - the architectural tour you curated in this post is terrifically themed and while I haven't seen all of the movies mentioned, there were enough scary moments to satisfy memories of many horror fans.  Well done.  Cue:  the creepy music accompaniment.

Interesting read and perfect for Halloween week. Little trivia for you. The exterior of the The Overlook hotel is actually Timberline Lodge on Mount Hood in Oregon.  ( The shot you show is Timberline) Many people think The Stanley Hotel in Colorado is where the movie was shot, no so. Although, King may have found some inspiration from the hotel.

Before, the Fairmont bought the Chateau Lake Louise, that was truly a haunted hotel, we stayed one very uncomfortable night and moved to a motel the next day on a skiing vacation.

The Hearst Castle in one of the area has ghosts as does the Coronado hotel basement area...A

Hi John- what a wonderful post and as others have said...perfect time of year for it. I'm not into Gothic Horror or other types of scary movies and will tell you that I saw Psycho and it was a good 4 or 5 months before I could take a shower.

What an amazing blog post and as I read thru it I couldn't help but think about all of the time and effort you put into making it. Thank you!