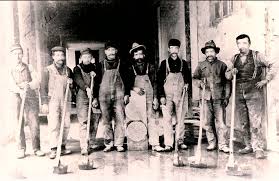 I grew up walking on terrazzo floors before I even knew what they were.  Solid, beautifully colored, typically on a black or light ground with specks of stones embedded, and completely moisture resistant.  Smooth, shiny, easy to maintain, nearly impossible to mar. Spills easy to clean up.  As tough as concrete, terrazzo is prone only to high concentrations of acid or alkali, but can be repaired.

This was in Turkey in the 60s - but it was in every country that touched the Mediterranean and in Germany and Scandinavia, Russia too.   We had it in the kitchen and bathrooms of our condo apartment.  It was in the common area floors on each level.  The speckled floors were in banks, restaurants, and nearly everywhere you looked.  They were used out of doors as well.

When I moved to Florida in about 1987, I saw terrazzo once again in houses from the 30s through the 60s, also in commercial buildings of the time.  Art Deco and Moderne styles featured these floors.  But then, during the 70s to date, the technique was seemingly abandoned.  Why?
Some of the most dazzling examples are during the Baroque era in Venetian palaces.  Terrazzo was discovered in ancient Egypt and excavated in Neolithic houses, and a term originally ascribed to the technique of polished colored and burnt lime and clay.  But this is not the terrazzo that we know today.

I would like to mention this other ancient art form, related to terrazzo only in that it was the first form of decorative flooring and mosaic work. Dad would take us on 'field trips' outside of Izmir, just an hour's drive from Ephesus, and we would see ancient Greek and Roman cities.  Most walls of individual houses or villas in these magical places with exotic names were barely standing.  But on the floors, there were mystical imaginative patterns -- floor murals.  If you looked closer, the designs were made of small half-inch square colored stones.  The Romans called these 'tesserae', after the Greek 'four'.  They were typically four-sided and stood the test of time through war, flood, and fire.   (image at left, 2nd century, Greece)

Wikipedia cites: "The oldest known tesserae dates to the 3rd millennium BCE, discovered in the ancient city of Shahdad in Kerman province, Iran."

This mosaic artform was installed in walls and ceilings throughout the Middle East in religious and public edifices.

Originally they were just assembled into patterns and pictures on a hard binder into a prepared area over bare earth.  The binder was probably a special clay. (below: tesserae floor of a Murano church) It took almost two thousand years using tesserae from the demise of Alexander's Greece to the mid-1700s in Italy for a chance discovery of a new flooring technique.  If you recall, it was the Romans who invented what is commonly termed concrete now.  Volcanic dust, when added to lime or gypsum mixed with brick or rock and water showed to harden and form an amazing structural material. So much marble sculpture was being produced throughout Italy during the Rennaissance and innumerable marble slab panels were used for flooring and facade veneer.  But was there an economical way to use the byproduct: irregular chips and stone fragments that were tossed?  YES.  You simply laid down raw concrete and sprinkled these leftover marble pieces, smoothed them over to harden, then grinded and polished to the desired finish.  This was terrazzo, originally 'pavimento alla Veneziana': pavement as in Venice.

In modern times, the cement base has undergone some changes with the addition of polymers and other additives.  In addition, in large placements of terrazzo, you must use dividing strips, as in modern concrete installations, in order to minimize the potential of cracking. (above, floor in Castello Bevilacqua, Venezia.  Note that in many cases simply using a linear border pattern eased the stress of the solid floor)  The beauty of the terrazzo floor was considered more precious than that of slab marble as it had artistic themes integrated. The most durable terrazzo installation would be on a reinforced concrete slab, poured on a stable base on grade.  Using it for second floors is trickier, as the potential for cracking increases.

So why is this technique not used much anymore? Cost. The labor required is two or three times over that of laying individual slabs of stone, marble, or tile.  This is very unfortunate because there is nothing more interesting to the eye or refreshing to the bare foot, than a cool polished floor of terrazzo!

Now you can import Italian (or other produced) terrazzo floor tiles that have the same durability and look of the original.

Did you know that the Hollywood Walk of Fame is one of the best-known examples of terrazzo flooring in the U.S.? (notice the dividing lines to minimize cracking)

Compare the hand-worked setting of individual marble, glass and other precious stones in the tesserae installation vs. the terrazzo technique.

As a child growing up in Florida in the 50s and 60s, everyone had terrazzo. I remember lying in bed in my grandmother's house in Largo and counting specs and triangles in the floor. I loved those floors and I love the name.

Yes, you could slide on these floors with socks, mom could mop up the mess, etc.  They are beautiful and durable.  I had no idea what I was walking on.  Thanks, Mimi Foster

John what an interesting history of terrazzo - who knew it goes back that far!! You were a lucky kid to get such a history lesson from your Dad.  I have seen quite a few homes built in the 50's and 60's (very modern style homes) with terrazzo. And now if it's still exising in a home,  many home buyers keep it - which I think is a great idea. I sure would if I ever buy a home with terrazzo.

I like to keep up with new technology so thank you for this one! I’ll be back for the next post!

Anna Banana Kruchten CRB, GRI, WLS Who knows how far back anything goes sometimes We take so much for granted. :)

John, thanks for the lesson on terrazzo! It makes a beautiful floor! I would love to have a home with terrazzo floors

I've actually seen those.  Only now, I know the history about them.  If you haven't guessed it by now, I love history

Hi James, I am glad you are here on AR because we learn so much from your love of history!  Thanks, James Dray

Good morning John Henry, Florida Architect - I had wondered what happened to Terrazzo in Florida.  When we were kids our grandparents had new houses in St. Petersburg.  When we visited we saw their shiny terrazzo floors throughout the home.  I certainly haven't seen it recently.

Hello John - another interesting history lesson.  Terrazo:  Not Just Another Blast From The Past.  Well, kinda.

Hello Grant Schneider   This technique, like lime stucco, is no longer being used due to cost.  A real shame as it can be magnificent.

Michael Jacobs   Michael, thanks for summarizing this essay.  I think I will use your description!!

Your vast knowledge on history and architectural styles, including Terrazo flooring is very fascinating and educational. As I looked at the photos and read the content for this post, I am pretty sure the new building (in the 1960s) at my Catholic Grade School had Terrazo floors because it looks like it and I remember the admiration the nuns had for the new building, especially the flooring when I stepped into my classroom. The old building had wood floors and the building was crumbling and I remember being told the reason why they had to build a new school and church was because it was a fire hazzard. Plus, near-by was another Catholic school called Our Lady of the Angels and that school did catch fire in 1958, so the Chicago Fire Department and the City of Chicago had to make changes.  I also recall seeing similar floors like photo in the second from the bottom at some hotels in Chicago.

Thanks to you, I'm always learning!

Hello Patricia, you never know sometimes!  Things that you experienced when younger will be vivid all of a sudden when a small detail is mentioned or highlighted.  Glad your new school was a proud achievement for the nuns and the students appreciated it.  You are correct: in the 20s terrazzo was used in many public buildings throughout the United States.  Thanks as always for your kind and positive reviews of my blogs!  Patricia Feager, MBA, CRS, GRI,MRP

This is so interesting.  What beautiful examples of flooring, and such practical use of by-products to make something durable and long lasting.

Yes, this type of material is considered 'green' because of its 'resiliency', meaning that it is recyclable.   The Venetians made it a true art and if you walk into any of the waterside palaces you will see many rooms with beautiful intricate flooring of terrazzo.  Thank you, Georgie Hunter R(S) 58089

Nov 30, 2019 04:09 AM
LIKE
#15
You must sign in or register to leave a comment
Login Register
Show All Comments
Older Post Newer Post
Back to Top
Generate More Leads from this Listing
With a Trulia Pro Account
Learn More
Find what you need?
See More Blog PostsAbout Real Estate! SEE MORE NOW!
Rainmaker
258,412