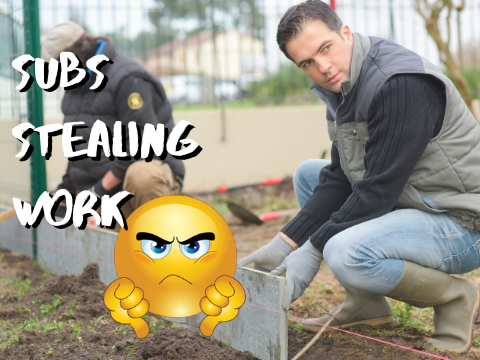 Protecting your investment means staying on top of maintenance and repairs when you own a home. Deferred maintenance has a tendency to increase project costs and scope. Peeling paint on a home's exterior, for example, can lead to wood rot -- which might lead to wood-destroying insects or water penetration, which in turn could lead to interior damages.

If you are ready to tackle household repairs, there are a few cardinal rules experts recommend when hiring contractors. Choices matter! Look for referrals from family and friends. Check qualifications and credentials where needed (proper licensing and/or certifications). Pull up their reviews online, giving preference to A-rated Better Business Bureau members and those who are highly ranked on Angie's List. Don't give contractors money upfront (as a general rule). And above all, require them to be properly insured (liability and worker's compensation) and bonded.

What's the Difference Between a Contractor Being Insured and Being Bonded?

"Bonding protects the consumer if the contractor fails to complete a job, doesn’t pay for permits, or fails to meet other financial obligations, such as paying for supplies or subcontractors or covering damage that workers cause to your property.

Insurance is different. There are two common types: liability insurance and workers' compensation. Liability insurance covers such situations as contractor-caused damage to your property, although it doesn't typically pay for repairing or replacing shoddy work. That is the reason for the bond. Workers' compensation provides payment to injured workers for lost wages and medical services, regardless of who was at fault. Workers’ compensation coverage will also provide benefits to the contractor's family in the event of a work-related death."

Working With a General Contractor

When the scope of work calls for multiple trades, there can be tremendous value in hiring a general contractor (GC). Often, a GC brings the credibility of a solid reputation in the local marketplace, backed by a legitimate business entity (registered with the State and in good standing), and equipped with the credentials described above (insured, bonded, rated and reviewed). It isn't uncommon for a GC to specialize in one or more trade areas themselves, but a customary practice is to subcontract ("sub-out") pieces of a large job to skilled and qualified tradespersons. This brings efficiency and speed to the table, combined with the benefit of keeping a single point of accountability between the consumer and the GC for the entire job.

When a GC puts his/her good name on the line, the trust the consumer has for the GC is naturally extended to his/her subcontractors. The interaction between the consumer and a subcontractor should never endeavor to cut the GC out of the conversation or solicit additional side jobs. When it does, this is a violation of trust, and quite frankly, revealing a character issue that should trigger a giant red flag warning in the mind of the consumer about that subcontractor. If a subcontractor is willing to bite the hand that feeds them (the GC), then they will also bite the consumer's. And it isn't a matter of if... it's a matter of when. Because leopards don't change their spots.

Consumers may naively fall into this kind of trap, assuming that such conversations are somehow condoned or endorsed by GC. Or, they may be tempted by bait pricing (undercutting) that causes them to forget about the due diligence steps they took when they initially hired the GC. And it is in the moments of when things go poorly that folks realize the mistake, and subsequently, the difficulty they might encounter with any recourse.

If you find yourself in this position as a consumer, the best thing to do is to alert your GC that you've been approached/solicited directly by their subcontractor. Bottom line: whether it occurs during the initial project or after the project concludes, the subcontractor should not be looking to drum up gigs out of another contractor's book of business. If it is a blessed activity, the GC will advise you of such. If the tradesperson is engaging in subversive activity, it will probably spell the end of the working relationship between your GC and that particular subcontractor.

There are several ugly truths that tend to emerge in these scenarios. As real estate professionals, we hear the horror stories and deal with the collateral damage caused when these situations occur.

The first thing a consumer should realize is that this person they are now considering doing business with has already demonstrated their willingness to steal. Thieves don't abide by the same moral compass that honest folks do. That cheap price they promised to win the side job is likely going to come at the expense of 1) failing to complete the work and absconding with money, 2) inferior craftsmanship, or 3) substandard or questionable sourcing of materials.

The second thing to understand is that consumers who unwittingly participate in these arrangements make themselves accomplices to the subcontractor's crime against the General Contractor (and others in the food chain that might be getting stolen from). GCs who earn their reputation in the marketplace by doing things right -- paying for advertising to generate new clients, earning referrals and repeat business, legitimately sourcing quality supplies, and taking care of the customer -- deserve loyalty from their relationships. If consumers understood the deep level of betrayal -- and equated it to robbing a mom & pop store, or losing a hard-won account to an unscrupulous poacher in their own line of work -- they would be quick to decline and report. Unfortunately, it seems many consumers are oblivious to how things work in contracting scenarios.

The criminal mindset always seeks to justify and rationalize criminal behavior. In defense of their actions, and perhaps to persuade you to use them after being confronted, you might hear things like:

Don't get played. Remember the golden rule. If you wouldn't want someone to treat you a certain way, don't do it to other people.

Hi Amanda,
You make a lot of valid points and working under the protections of a reputable GC who is properly licensed, bonded and insured is extremely important.  I know many subs who look for "side" work to make extra money. It doesn't necessarily mean they will do substandard work but almost always they ARE trying to avoid paying their fair share of taxes by working "under the table". You may save yourself some money but you are not getting the protection of working with someone who is properly licensed, bonded and insured.  The liability can be significant for the homeowner and, potentially, way more expensive than any savings.  The same is true for homeowners trying to sell their homes themselves (FSBO). The protections of working with a licensed and experienced agent is very valuable.

Carol Williams thank you so much for reading -- AND for adding the insight on tax evasion. You are SO RIGHT! Tax avoidance strategies are legal... tax evasion is not. Excellent point!

Just having this conversation yesterday . . . there are a lot of bad actors out there and almost always, they will 'tell on themselves' at the get if we're paying attention.

If not, checking them out via independent sources (our State Registrar of Contractors is a great resource) protects us.

Oh yes, hiring just anybody to save money is a big mistake. We were very careful to hire licensed and bonded pros for our kitchen remodel this year. Yes, it was spendy, but we have peace of mind - and a record of all  work being done right if we ever decide to sell.

Hiring the right contractor is so important. Checking referrals, ensuring correct insurance/bonding is in place, and keeping an eye out for underhanded subcontractors are all critical. Thank you for an informative post!

I have been approached in the past by subs looking to undercut the GC. I never accepted but I never told the GC either - I worried about the sub getting angry and retaliating. They might not be the best people . . .

Margaret Goss, that is probably not an uncommon fear. It is interesting to me that there was once a time -- not so long ago -- that most folks would have immediately recognized this as an unethical thing to do. And they would have staunchly refused to participate. Somehow in today's world, the lines have blurred. As we speak to consumers we are finding that many never thought there was anything wrong with it.

There is certainly a wealth of valuable information here. You hear all sorts of horrors stories from time to time about consumers who have gotten burned by unscrupulous contractors, ad those without the appropriate insurance. We have done a couple major remodels over the years and werecareful to do our due diligence and hire licensed and bonded contractors with the appropriate insurance.

Yes everyone wants a reasonable repair price yet don’t always understand the reasons for the differences in prices.

You will get what you pay for ... speaks loudly when you consider all the implications of what may be hidden not using a GC ... others have already made mention of those items.  Buyer Beware!

Awesome post, well written and eye openening! I have had some not so great dealings with some of these contractors including my own home. May I add one point? Don't ever pay for the work up front, maybe a deposit. I had to drag a contractor out of a bar to finish painting a house of a lady I was dating at the time. She paid him up front! He started the job then after a month of no-show I had to have a chit chat with him.

Like
Chris Lima
Atlantic Shores Realty Expertise - Port St Lucie, FL
Local or Global-Allow me to open doors for you.

Fantastic post. I have bookmarked this one. It's a keeper.

Great advice.  As a renovation home loan specialist, I deal with contractors every day.  Always best to follow your advice.  Thanks for the post.

as a former contractor... excellent article

Like
Alyse "Aly" Sands
AGORA Realty - Nashville, TN
It's Good To Be Home

Great article! My husband is a GC in Nashville, TN.  He is booked through half of next year.  He builds, remodels and repairs.  Many of his remodels are do-overs of what unlicensed (and some licensed) contractors have done or didn't complete.  He keeps the same subs because he treats them well.  They will not undercut him. There are so many people who frown on his prices (which are average for licensed, insured, bonded) so there are also so many people needing work redone by handymen.  He has had to rip out a year old shower more than once.  Some of the builders or subs cut corners but the unlicensed, uninsured worker has no higher authority to answer to nor do they care about their reputations.  Saving money up front almost always costs you more and gives you more headaches in the long run.

It's always a matter of trust hiring a contractor...even if he/she comes highly recommended!  I didn't know the difference between bonded and insurance--thanks for the clarification.