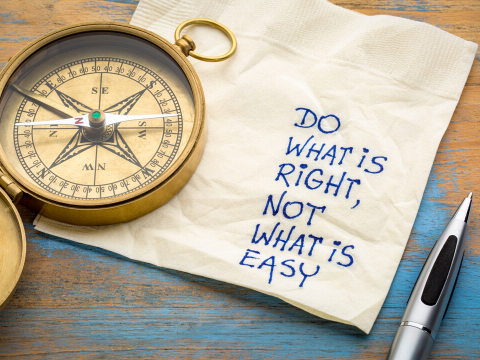 Scruples -- these are a set of feelings (attitudes/guiding principles) that cause us to hesitate or be reluctant to do something that we think might be wrong.Society and the business world tend to recognize those who push the envelope. As entrepreneurs and leaders, we often make our biggest strides through innovation and "disrupting" the status quo. And when we prove what we are doing is successful, others follow our example.I think most readers in this audience would agree that there are lines that should never be crossed. Have you ever managed or supervised someone who constantly justified unethical behavior by saying "it's better to ask for forgiveness than permission?" They are exhausting to deal with, aren't they? Their lack of scruples typically leads to getting what they want at everyone else's expense, with no remorse for those they harm along the way.

Sometimes we can help people, and sometimes we simply need to recognize who people truly are -- and part ways. Those who are willing to abuse others around them will never be a positive reflection on your company or personal brand. And that is a far cry from pushing the limits of the status quo.

Bill Murphy, Jr. quotes Mark Suster, writing at Both Sides of the Table in his Inc. column, excerpted below for quick reference:

"I have always believed in the saying, "It's better to beg for forgiveness than to ask for permission."  It's a way of life.  It's not about abusing situations but about knowing when to push the boundaries.  It's about knowing that the overwhelming number of people in life are naysayers and "no sayers" and sometimes you gotta just roll the dice and say WTF."

Interesting post, thanks for sharing these thoughts.  I am not sure how to take, "push the envelope"  Is that a good thing?  is wrong to strive to be the best you can  be and push that envelope as opposed to the masses in the middle who are mediocre?

Peter Mohylsky, that was exactly the discussion on the table. Answering the "is it wrong" question requires the ability to discern if one's actions or decisions bring harm to those around them.  The art of pushing limits (innovating, extending, enhancing) doesn't mean trampling on others. Those that give themselves permission to break the rules for their own benefit and gain are not heroes in my book.

Hi Amanda,
I think there is a definite line between scruples and innovation through pushing the envelope or what is considered normal and acceptable.

The below quote reminds me of the story of the scorpion and the turtle:
Sometimes we can help people, and sometimes we simply need to recognize who people truly are -- and part ways.

Amanda I did have an agent that went over the line and he moved on quickly. No place for that in my business or life!  I like the quote from Carol Williams.

Sometimes we can help people, and sometimes we simply need to recognize who people truly are -- and part ways.