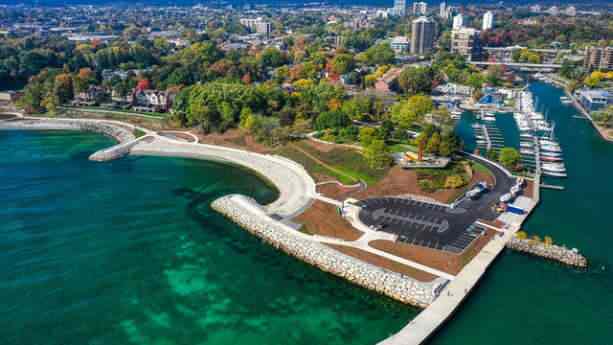 The Town of Oakville has been rehabilitating some of its shoreline and last Friday, November 8, 2019, the new west shoreline was unveiled to the public in a grand reopening event held in the early afternoon.

The ribbon cutting for Oakville’s new west shoreline was held at 12:15 p.m. – marking that the third phase of the Oakville Harbour redevelopment along the shoreline of Lake Ontario was finally complete. The rehabilitated shoreline runs a distance of around 500 metres. The project included a seating area, new lighting, connecting trails, cobble beach areas, landscaping, interpretative panels, a butterfly garden, and rehabilitation of the shoreline that also improved aquatic habitats around it. A drone footage of the before and after can be viewed via the Oakville Harbour rehabilitation page in the Town’s community website.

The Town of Oakville identified that Oakville Harbour’s west shore is in need of rehabilitation back in 2007. A plan was developed together with stakeholders and residents. After a few revisions, the final plan was approved by Council in 2009. The master plan covered a large portion of the waterfront area and included recommendations for Tannery Park, Shipyard Park, Walker Street Promenade and Waterworks Park. The Town Council approved the funding the first of the five phases in the master plan in 2012.

Fast forward to June 26, 2018, an Open House for residents was held by the town to talk about Tannery & Waterworks Parks Shoreline Improvements. The residents got to learn more about the proposed improvements as well as review the plans before they were implemented. The work didn’t start with this, a Class Environmental Assessment had to be completed in 2015 because a huge portion of the work meant infilling into Lake Ontario. Many regulatory agencies were involved and did their own extensive reviews due to the sensitive nature of the project.

Armourstone was carefully placed with great attention to detail to create fish habitat. They were laid out according to the engineering drawings prepared to help construct the new shoreline. Permits and approval for the development of the new shoreline were provided by:

A Work of Many

Together with the agencies above, the Town created an aquatic habitat while improving a section of the lake. Once fully completed, the new aquatic habitat will be better than pre-construction conditions. Together with the MNRF, the Town also made sure to include a habitat suitable for the American Eel to assist the species. The project team followed mitigation procedures and measure to ensure that the wildlife and surrounding habitat will be protected during construction.

All of the above culminated in Friday’s grand reopening of Tannery and Waterworks Parks. There was a self-guided tour as well as refreshment vehicles for those who dropped by.

Do you want to be a part of the Oakville community? See which Oakville neighbourhood might be best for you and head on to our list of available Oakville luxury homes to take your pick. Contact us to schedule a viewing for the home of your dreams!