Only a few miles off the Gulf of Alaska, it offers spectacular fishing of safe inside waters, or a short boat ride to the open ocean where the really big fish live.  Halibut over 100 pounds are caught all season, and occasionally well over 300 pound trophy fish are brought in by lucky anglers.  These large fish are the breeding stock, so limits are strictly enforced.  (Most locals prefer to keep fish in the 35-80 pound range for that reason.)  King (Chinook) and Silver (Coho) are abundant as well.

The community, built mostly around the inner harbor, has no streets, only boardwalks.  At the last census count, there were only 32 residents year around, but the community comes alive in summer when all the fishing lodges and the restaurant open.  Commercial fishermen use the harbor as well.

Before the post office opened in 1935, Elfin Cove was known by a few other names, one being "Gunk Hole", which was borrowed from the East Coast where in connotes any safe harbor.  The post office changed the name because the only resident willing to be postmaster would not take charge of "Gunk Hole" so the town was renamed after her husband's boat, the Elfin.

Brought to you by Debbie White, REALTOR, Associate Broker - RE/MAX of Juneau http://www.isellalaska.com/

Show All Comments
Jim Crawford
Maximum One Executive REALTORS® - Atlanta, GA
Jim Crawford Atlanta Best Listing Agents & REALTOR
This looks like a great place to get away from it all and have a peaceful time!  How long have you been selling Alaska real estate and Alaska waterfront properties.
Like
Debbie White
Southeast Alaska Real Estate - Juneau, AK
I Sell Alaska!

I was licensed in 1999 and got my Associate Broker license in 2002.  From the beginning, I was involved with remote real estate.  Once I got to travel around in float planes, helicopters and boats and see so much more of our beautiful area, I was hooked.  Millions of people save for a lifetime to visit my backyard.  I feel so lucky to get out and see more every day.  Thank you so much for your comments! 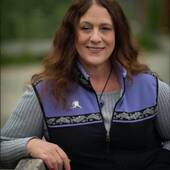