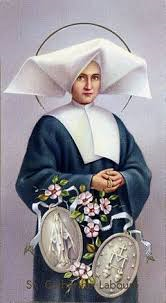 "The Blessed Virgin, Macy’s Thanksgiving Parade and Alfred Nobel all have what in common?”

All three share an important newsworthy anniversary on November 27th.

Want to know more about the Blessed Virgin, Macy’s Thanksgiving Parade and Alfred Nobel? Read on to find out about these and other interesting tales that happened in history on November 27th.

1810 – The Berners Street hoax was perpetrated by Theodore Hook in the City of Westminster, London. Hook had made a bet with his friend, Samuel Beazley, that he could transform any house in London into the most talked-about address in a week, which he achieved by sending out thousands of letters in the name of Mrs Tottenham, who lived at 54 Berners Street, requesting deliveries, visitors, and assistance

1830 – Saint Catherine Labouré experiences a vision of the Blessed Virgin standing on a globe, crushing a serpent with her feet, and emanating rays of light from her hands. Catherine  was a member of the Daughters of Charity of Saint Vincent de Paul and a Marian visionary who relayed the request from the Blessed Virgin Mary to create the Miraculous Medal now worn today by millions of Christians, both Catholics and other denominations.

1895 – At the Swedish–Norwegian Club in Paris, Alfred Nobel signs his last will and testament, setting aside his estate to establish what would become the Nobel Peace Prize after he dies.

1968 – Penny Ann Early became the first woman to play major professional basketball, for the Kentucky Colonels in an ABA game against the Los Angeles Stars.

1971 – The Soviet space program's Mars 2 orbiter releases a descent module. It malfunctions and crashes, but it is the first man-made object to reach the surface of Mars.

While these interesting facts about the Blessed Virgin, Macy’s Thanksgiving Parade and Alfred Nobel on November 27thhave nothing to do with my real estate business selling Silicon Valley homes to families in San Jose, Cupertino and Saratoga in Santa Clara County, Calif., they add fun and entertainment to life.

For more fun facts and information on Silicon Valley real estate, homes and careers, subscribe for free to Michelle Carr-Crowe’s blog at http://www.activerain.com/results.

Michelle, thanks for sharing all this information, and I wasn't ever very good at history.

Thanks for reading about these happenings on this day in the past, and a

Happy Thanksgiving to you and your family!

Happy Thanksgiving, I did not know about Penny, hmm got some research to do

Thank you for reading-I'll bet you will be featuring Penny soon!