The million-dollar question, how much weight should you actually lift?

During my younger years, I always lifted as heavy as possible and went to absolute failure.

As I'm approaching my mid 30's, my joints don't seem to respond as well to this kind of abuse.

I make one wrong move with my back, I'm crooked for weeks, my elbows and knees are sore, and I find myself popping Advil like it's candy.

While I believe it is important to use a weight that is challenging (this is absolutely necessary for hypertrophy to occur), I no longer torture myself with weight I know is most likely going to injure me.

Let's use Ronnie Coleman as an example,

He won the Mr. Olympia title 8 years in a row. His philosophy was to lift heavy, and you will look heavy.

At one point, he was deadlifting over 800 pounds.

While this style of training did help him achieve the Mr. Olympia title countless years in a row, it’s also the reason why he has had several back surgeries and is now in a wheelchair.

Even though he will be probably going down in the history books as the greatest bodybuilder of all time, all of his hard work came with a large price.

In fact, his last back surgery did not go so well, and he now may never walk again. It was actually quite painful to watch the documentary on his life as it currently is.

Even to this day as his doctors have advised him not to, he still lifts as heavy as possible despite being in a wheelchair.

Now, this is obviously taking it too an extreme.

The general message I'm trying to get across is you don't have to lift heavy in order to see results.

Just remember to mix things up.

Remember to be consistent with your workout routine.

If you really want to see results though, you have to keep the battle going not just in the gym, but in the kitchen as well.

Make sure to fast and eat enough of the right calories, but not too much either.

I don't care how healthy you eat, if you go over your calorie deficit, you're going to put on weight.

My general rule of thumb is only go slightly over or under your caloric needs. This way, regardless of whether you're trying to lose weight or gain weight, the results will stay consistent without any extreme changes. 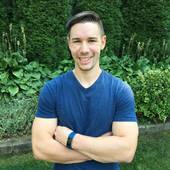 I am a professional
ThinkHealthyFITNESS
FollowProfile
Blog
Contact The Author