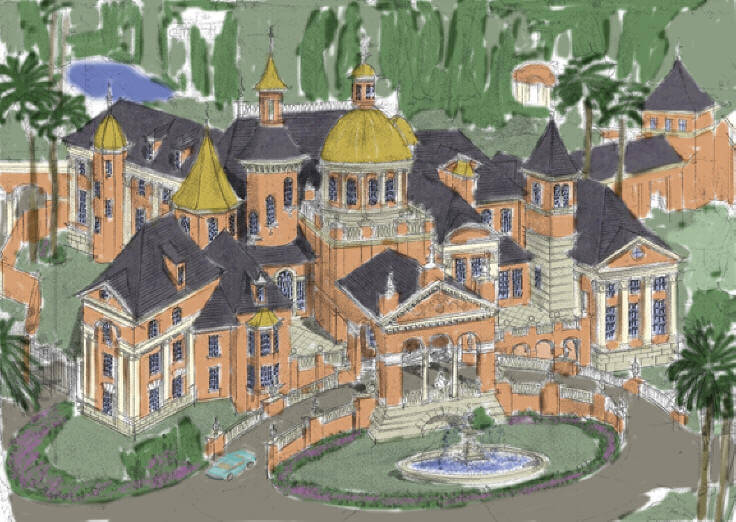 "It was the best of times, it was the worst of times..."  It was in the middle of the last recession...

He knew building methods and construction, he had worked with many recognizable celebrities, he was anxious to get a fabulous home started.  He raced cars as a past time, loved powerboats, etc.

He would call just about every day for two weeks and talk for 45 minutes or more.  He wanted to see a special block construction system that looked like limestone on the outside to simulate a stone-built house. We discussed this system in some detail and I talked to the manufacturer to ask several questions.  He wanted to fly out from London and see how a model house, under construction in southern Florida, was progressing. He mentioned how he'd seen large scale graphics from photos of period houses affixed to the interior walls as to emulate a mansion at a fraction of the cost.  This is actually an interesting way to make your 'marble barn' look like a palace if you liked -- at very little cost.  The 'fooling of the eye' is a French adage that was first employed in many villas in Renaissance Italy.

He asked me finally to send him a design proposal and within two days we had ironed out something that worked for both of us.  His red-lines made sense and I was pleased with the outcome.  Very.  He said that he would be coming to meet me personally within a couple of weeks and have further detailed discussions.

Next, he wanted a referral for a custom builder and when he got in touch with Mike they had about two weeks of back and forth, at approximately an hour a day.  This was during the last recession, so it was a large project and needed to be handled well.

One day I received a call from a real estate agent from the area who asked me if this gentleman was 'real'...  I paused and thought a bit, shaken.  I responded that I wasn't sure but was wondering as well and then asked what she thought and this is the story she told me: He had been looking at multiple properties over a 6 month period and was given dozens of contracts to sign but never returned one signed. He was looking at 20 acre tracts with coastal frontage: a multi million dollar land buy.  She sent him photos, surveys, etc. and he would keep looking, not committing. There were many phone calls.  He had promised to fly out several times to sign a contract even, but never did.  He kept promising to come but plans changed at the last minute.  Finally, he indicated that he was fond of her and wanted to meet her for a date after they had conducted business.  Oh boy.  She seemed to

be a little frantic at this point.  Here was a potential client looking for about a $12 million property, and then was going to build a 60,000 SF house.  He was constantly on the phone with her and went over several different options but would not sign anything.  She asked if I had received a signed contract.  Actually, no.  He was going to meet me, sign, and forward a retainer.  I had not started any real work.  The agent gave me her phone number to contact if I had any news.

Then I had a call from the builder.  His secretary thought that the

deal smelled foul and she decided to do some digging.  Mike complained that this person was on the phone for hours asking technical questions that seemed legitimate but wasn't sure that he was above board.  He asked for the real estate agent's number to discuss further.  Mike's secretary obtained a couple of phone numbers from the agent and tracked down a street address out of London.

At the same time, the realtor contacted me and claimed that after she indicated to her client that things were strictly business he had stopped calling and she couldn't reach him.  The builder's secretary soon found out, through some expert sleuthing, that the persistent caller was living with his mother in an area of government-subsidized housing on the edge of London.

The cell phone he was using went out of service suddenly and we lost complete contact with him.

So...is this account REAL or is it MEMOREX?  This story is part of Active Rain's December Challenge for 2019: "Your Craziest Transaction".  Comment below and vote: true or made up?  See more great stories at the link below:

Here is my second yarn!  If you liked this one, link here for another dooser. Tags:
true real estate story
who can you believe

You must sign in or register to leave a comment
Login Register
Show All Comments
Rainmaker
1,628,647
Carol Williams
Although I'm retired, I love sharing my knowledge and learning from other real estate industry professionals. - Wenatchee, WA
Retired Agent / Broker / Property Manager

Hi John,
I can believe your story. Someone living in a room at his Mom's house who gets his kicks out of acting rich and important.  It's a common story on a grand scale.

True or not, I found this interesting.  Make it a great day

This one sounds true. I can see someone doing this, and having it sound totally plausible to the real estate agent, builder, and architect!

John Henry, Florida Architect
I believe this is called "catfishing" and is very common now that the internet allows people to be others with no consequences. Time thievs...
All the best - Lynn

Hi Carol Williams   Yes, I like how you put it!  'Common on a Grand Scale'.  Visions of grandeur!  I have visions too, I just don't act them out.  Thanks!

Hello, James Dray, I can cook up a good yarn every once in a while, James!  Glad you liked it.  Best to you.

Hi Kat Palmiotti   In a recession, you want to believe anything that comes along.  This story could have turned out just fine, as you cannot know absolutely what others have in mind.  A hunch can be revealing though!  Thanks.

Hello Lynn B. Friedman   You are correct!  People like this are truly 'time thieves'!  This entire event was a 4 week ordeal!  Thank you.

There’s always something happening in Florida, so this one doesn’t surprise me in the least.

Hi Laura Cerrano   There are a lot of hucksters in this business!  One of the most notorious cons for years was a builder receiving a large retainer to start a home but then disappearing with the cash.  Of course, this can happen anywhere.  Thanks!

They say one of our four of us are mentally ill. The smart crazies, those are the ones that don't always trigger the red flags you quickly see the longer you list and sell. It is not empty houses, vacant lots, just buildings we deal with daily. There are people, emotions, time deadlines, family expansion or blending, divorces, bankruptcies and illness like addiction, paranoia, narcissism all rolled into the what we deal with in the can I help you service providing. Sometimes you are best to back away... the earlier you see it, the more productive use of your time.

Good afternoon John Henry, Florida Architect - that is really some con job.  I wonder other than dates what his end game was.

Crazy. I've had some like this. They're looking for million dollar homes and when you pursue proof of funds things go in a different direction. They're thieves stealing people's time.

People are living out their fantasies at the expense of others. Usually its a con-job in the making. Most of the time it's just to waste time. I've seen it and experienced it many times as well. I had a young man contact me with interest i  buying a mega-mansion - he had two young girls with him; one may have been his "girlfriend" - He pulled up in a fancy BMW or something similar - he knew what he wanted based of the options that I gave him.

I did not rush out and show them any properties; we just previewed then on the MLS using a large TV monitor to see the images in better detail.

When the time came to show "proof of funds" - the whole charade came to an end. See, he was just trying to impress the "girls" but really could not make such a deal happen.

Hello, Andrew Mooers | 207.532.6573  The emotional side of this business is as important as the technical side.  We deal with people and are always trying to find out what is really making them tick.  Thank you.

Hi Grant Schneider  I have thought about this con for a long time.  It appears that some people want attention and we give it to them big time in this business.  We assume they are genuine, we have to.  Vetting can stop some of the bleeding but one can always change their minds.

Hello Carla Freund Yes, there are thieves out their stealing your precious time, very unfortunate.  From a foreign country especially, I have had multiple problems.

Hello Mott Marvin Kornicki  I think these people prey on those who expect their clients' best intentions.  Any business is prone to such capers.  Thanks for the story.

Thank goodness for Google!  I check out people before I even return a voice mail! It makes for good reading. And the good ones check out fine and they probably googled me first!

These December challenge stories are ... real?  Hard to make this stuff up.  So much time wasted with this fake buyer.

Yes, Carolyn Roland-Historic Homes For Sale In Delaware and S. Chester County PA  if you can vet someone right away, it is for your better.  But not always possible, especially out of the country buyers.

Mary Hutchison, SRES, ABR   glad you liked my tall tale... or is it real??

Sadly, my guess it this is true, other than that this buyer actually intended to buy or build a home. Why go through all that?!

Hi Jeff Dowler, CRS   Yes, this is a true story.  Crazy people out there.  Thx!

I will bite! True! There is enough substance and detail to make the story relateable to all of us even if the scale is different.

Hi John Juarez  This is a TRUE story!  Thank you for reading this, when so much else of better value is on AR~~!  Have a great day, John!

Dec 22, 2019 09:42 AM
LIKE
#25
You must sign in or register to leave a comment
Login Register
Show All Comments
Older Post Newer Post
Back to Top
Generate More Leads from this Listing
With a Trulia Pro Account
Learn More
Find what you need?
See More Blog PostsAbout Real Estate! SEE MORE NOW!
Rainmaker
258,437