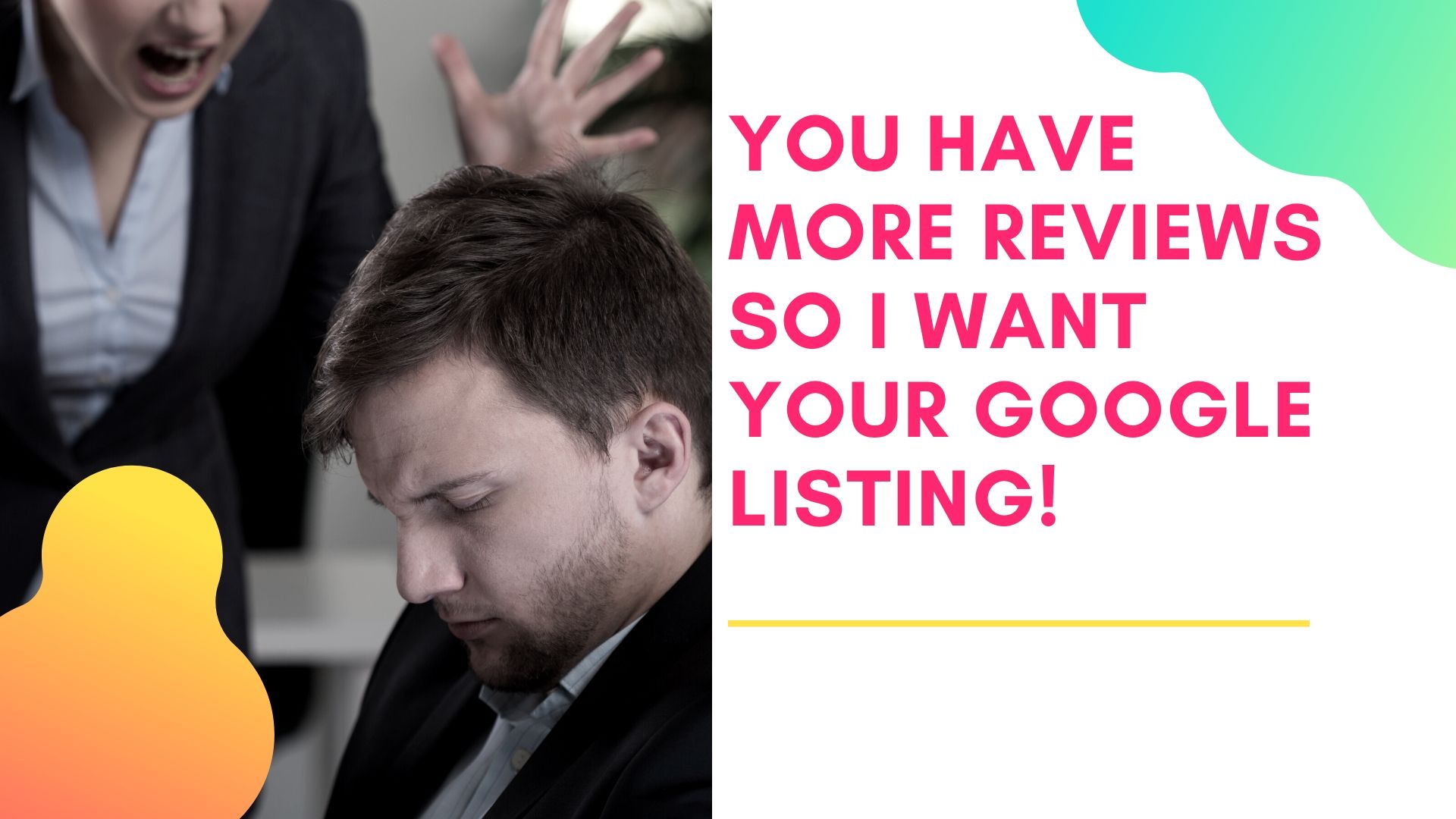 Just sit right back and I'll tell a tale... a tale of a silly broker...

This has been an interesting scenario over the last month that we've helped deal with but it shows that some brokers are willing to step over dollars to pick up pennies. We've worked on and off with a client in Illinois that kills it with his Google Business Page. He thought ahead and signed up for a Google Business page years ago listing his name and his brokerage office.  He's collected several dozen positive reviews. However, his broker recently got a complaint that he gets the call when someone looks up his brokerage instead of the office admin. He's one of the top producers in his office and his broker complained that he shows up instead of the office. She told him he needed to give her the business listing. He refused saying that all the reviews are for him, not her or the brokerage but him personally. She insisted that he give her the business listing or change his name. On top of it all, he was changing IDX solutions and she refused to sign the IDX approval until he gave her the business listing!

Now, he gets a lot of business just from his Google business page alone so changing it would mean not showing up for what he's been showing up for years and maybe dropping his ranking. However, after some research with us, we noticed that 4 agents in the office were using the same Google business name [Brokerage] [agent name] and because he has many more reviews than the others, he comes up first.

We have talked with this broker multiple times about how she can set up her own business listing and that we'd even help her and then she can work hard to get the reviews needed and such to compete with him but she seemed like she'd rather fight for his listing than create her own... (Seems like crazy politics if you ask me)

Our Client agreed to change the name and did, but as you probably know with Google, they may take a bit to change so she didn't believe him that he changed that name and was now yelling at US for controlling Google.... um, hello?? WE DON'T CONTROL GOOGLE - NO ONE DOES BUT GOOGLE, but she literally wouldn't believe us.

But - since this broker didn't get complaints on the other agents in the office, they are not changing their names (That is until someone else complains)

All in all - it's been a long go-around and he almost left for another office which would have lost this broker thousands of dollars in fees! That just seems counterproductive; to be willing to lose an agent because of another agent's complaint about who shows up first when Googled.

Will Google change the name? Eventually. But in the meantime, we both have to negotiate and convince her that we don't control Google and Google will eventually change it, however, I don't see her signing anything until she's satisfied. Ugh...

Need help with your Google Business Page? We Do That (and a lot more!)

Allp poerful google!  I would not work for that broker.  Such an unfair practice.  No respect.

Exactly! Work WITH your agents, not against them

That broker is less than smart by bullying the agent and listening to another whiny agent - waaaa waaaa waaaaa. I'm surprised he put up with it and didn't move on.  Clearly the guy knows how to make things happen on his own. He doesn't need the that broker.

I agree. but he checked and the other office in his area took way too much of his commission and he would have lost 2 deals so he's trying to make it work. but so far, she STILL has not signed his IDX agreement!!!

We can't fix stupid now, can we?  Nor can we control the Big Google. I would have left the brokerage - big move but that broker does not deserve to benefit from his hard work.

Tim and I have said that over and over! "Can't fix STupid"! HA HA

There's more than a few things about this story that would have me looking for a new RE/MAX franchise because that broker's actions are not in line with my RE/MAX experience.  The broker is there to help the agents succeed, not steal the fruits of their hard work.  Refusing to sign the IDX approval is just plain extortion and would have me gone.  Bill

yep, not signing an IDX form is extortion.

YES! and to this day she STILL hasn't signed it!! We even offered to help her create a business page FOR FREE! And she doesn't believe us... ugh

Talk about a disincentive to be a tech savvy agent who knows how to build their business.

I agree , He should have moved offices or threatened to.  Unbelievable!

It happens more often than we think and I totally get where you’re coming from on this one for sure.

What a mess, and rather petty I think. Someone does not understand how Google works.

Tammy, it sounds like she doesn't understand how SEO works and how Google works.

Good morning Tammy Emineth -he should move away from tat broker.  She sounds like a control freak.

Before changing anything I would challenge that BIC and ask for the company policy on this as I believe in Illinois and most states you are required to disclose your Brokerage name in all advertising.

At the same time contact the State RE attorney from the board. The 4 other agents in the office were using the same Google business name [Brokerage] [agent name] This is a requirement if not law.

That GMB listing probably carries enough clout with Google that if they change the name to a higher searched keyword like "city name" they will get even more calls. Either way, you still have to disclose the Brokerage name.

Seems like someone is looking at the small picture and not stepping back and looking at the larger picture. This may be one step, but can see this agent moving before too long.

Oh my, that sounds like the proverbial circular firing squad. Obviously, the broker is behind the times when it comes to technology. She should enjoy the rain her agent is bringing.

Like
favorite_border 2
Laura Filip
Laura Filip Broker , Opening doors for All Seasons of Life - Whitesboro, TX
What can we do for you today?

Thank you for sharing this with us, very interesting to say the least.

One can change to another office, although the name would need to change as well. Very odd to react is such a manner. Oh well move on and get your own office started.

The agents in my office complained to my broker because I had done the same thing with Google. They made me change my Google name and Facebook name. Now none of us get good rankings. Way to go!

Oh are you serious, Sandra Newman !? That's awful! They probably lost you business!

Wow - just goes to show how some can be so short-sighted.  Good job Tammy.

We had something like this happen years ago & it was the other agents in the office that didn't understand. I wanted my name & then the office name. I was the only one that showed up so it didn't seem like I was using the office page per se.

It's so pathetic that most people still do not understand how to market & try to tell GOOGLE what to do. That just makes me laugh & laugh.

If no one else is doing it and you're just above the crowd,,, it certainly isn't YOUR fault that they are slacking!

Wow it is amazing at what some will do? Do you even need a personal website anymore with Google?

Oh for F's sake! LOL! Stepping over dollars for pennies is right!

Do you remember back when Jay Thompson had a shrieker accusing him of 'illegally manipulating the Google'?

the hilarious thing about this story is that because they know what they are doing, the top producer will again rise above the brokerage, as cream does.

You can't win by stealing someone else's mojo!

That blows my mind when people think WE have any control over the big G.  I do remember Jay's post.. so crazy! Home Selling 10 months ago
bookmark_borderbookmark
Do the Number of Days on Market of a Home Matter D...

We do a lot of things! In addition to writing dozens of articles and blogs each month we offer assistance to real estate agents with their websites and all types of commercial and personal websites. We do marketing and online promotion through various social media and blogs. My AR Blog showcases what we do and how you can do it too!