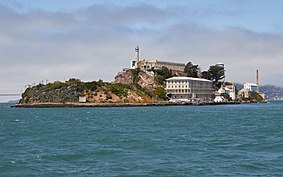 Want to know more about the Boston Tea Party, Alcatraz and the Transistor? Read on to find out about these and other interesting tales that happened in history on Dec. 16th. 1497 – Vasco da Gama rounds the Cape of Good Hope, the point where Bartolomeu Dias had previously turned back to Portugal.

1689 – Convention Parliament: The Declaration of Right is embodied in the Bill of Rights.

1773 – American Revolution: Boston Tea Party – Members of the Sons of Liberty disguised as Mohawk Indians dump hundreds of crates of tea intoBoston harbor as a protest against the Tea Act.

1826 – Benjamin W. Edwards rides into Mexican-controlled Nacogdoches, Texas, and declares himself ruler of the Republic of Fredonia.

1907 – The American Great White Fleet begins its circumnavigation of the world.

1930 – Bank robber Herman Lamm and members of his crew are killed by a 200-strong posse, following a botched bank robbery in Clinton, Indiana.

1937 – Theodore Cole and Ralph Roe attempt to escape from the American federal prison on Alcatraz Island in San Francisco Bay; neither is ever seen again.

1978 – Cleveland, Ohio, becomes the first major American city to default on its financial obligations since the Great Depression.

While these interesting facts about Alcatraz, Boston Tea Party, the Transistor on December 16th have nothing to do with my real estate business selling Silicon Valley homes to families in San Jose, Cupertino and Saratoga in Santa Clara County, Calif., they add fun and entertainment to life.

Thanks for reading “The Boston Tea Party, Alcatraz and Transistor-12 Tales of December 16”.

Somewhere in the recesses of my limited memory bank, I recall writing about some of these.

Hi Michelle - I remember the "shock" when the default of Cleveland made the news.  It was so important but it almost seems to be a "blip" today in some ways.

I'll bet by the time you write about some, I may have forgotten them.

Yes, it was a huge shock to the country, as was when it happened to New York City.