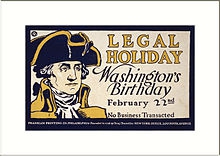 Are you curious to know more about Thomas Paine, George Washington and the Rolls-Royce Silver Ghost?

Read on to learn more about these and other interesting tales that occurred in history on Dec. 19th.

1776 – Author Thomas Paine publishes one of a series of pamphlets in The Pennsylvania Journal entitled "The American Crisis".

1924 – The last Rolls-Royce Silver Ghost is sold in London, England.

1956 – Irish-born physician John Bodkin Adams is arrested in connection with the suspicious deaths of more than 160 patients. Eventually he is convicted only of minor charges. A convicted fraudster and suspected serial killer, during the 10 years between 1946 and 1956, more than 160 of his patients died in suspicious circumstances. Of these, 132 left him money or items in their wills.

While these interesting facts about the Rolls-Royce Silver Ghost, Thomas Paine and George Washington on December 19th have nothing to do with my real estate business selling Silicon Valley homes to families in San Jose, Cupertino and Saratoga in Santa Clara County, Calif., they add fun and entertainment to life.

Thanks for reading "Rolls-Royce, Thomas Paine, George Washington Share What?"

Thanks for reading “Thomas Paine, George Washington and Rolls-Royce-6 Tales of December 19”.

Interesting tidbits of history, post them often please, I so enjoy them

Hi Michelle,  Thanks for sharing these interesting milestones for December 19.

James, as you know I love sharing Interesting tidbits of history.

Thank you for reading, I do enjoy sharing these Interesting history facts.