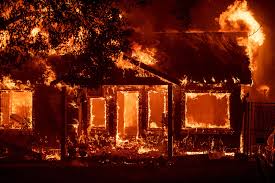 I got a call from an agent from a few hundred miles away who referred me to local homeowners who wanted to sell and move to that agent’s area.

The sellers were a couple who had lived in my city for about twenty years. He was retiring and she did not work outside the home. Their daughter and her husband lived with them…along with several dogs, cats and a macaw…among other pets.

I contacted the owners who agreed to list with me. They had already written an offer with the referring agent to buy a house in the area of their desire in Northern California with two separate homes and plenty of room for all their pets…and the daughter’s horse which was being kept in a stable facility away from their current home.

That offer was not accepted so nothing happened at that time.

My new clients found a new property with another agent and got into escrow with a contingency based on the sale of their home. I and our Team put their house on the market in late August 2018.

Then…the wildfire that was named the Camp Fire wiped out the town of Paradise, Ca. which was where they planned to move. The property that they planned to buy, with two homes and a barn and other features that met their needs was destroyed by the fire. Did I mention that my clients had accepted an offer on their house? So...if they honored their contract to sell, to where would they move? Where could they house…for an undeterminable time…a multi-generational family and multiple pets?

Did I mention that one of their pets is a snake?

My client balked on completing the sale. The erstwhile buyers, of course, insisted that a deal is a deal and wanted their new house. The sellers said, “No…we have nowhere to go.” They sent a cancellation notice to the buyers. The buyers, despite the fact that they probably could have made life miserable for the sellers who were subject to a valid contract eventually agreed to sign the cancellation form with the agreement that the sellers reimbursed them for the cost of the appraisal. The deal was killed and the listing was taken off the market at the end of October 2018.

Whew! But my clients still wanted to move. The husband had retired and the son-in-law had been seeking a new job in the new area. Their entire family was ready for the next phase of their lives.

So, they kept looking for their new home.

By and by they found another property and wrote an offer contingent upon sale of their existing property. The exiting property was put back on the market in mid-March 2019.

The local market had undergone a change. Prices were softening. Properties were staying on the market longer. The seller needed a certain price to make the whole deal work.

The sellers of the property which was the subject of their purchase got another offer and kicked my clients out and contracted with another buyer.

At that point, my clients made the decision to keep their house on the market, sell the house and deal with whatever consequences arose. They were SO ready to do whatever was required to meet their goal.

They found another house…made an offer…got their house into contract after agreeing to a less-than-desired price and closed their sale in late July 2019. They soon closed on their new home which is in a community a few miles away from the town of Paradise.

Their new home is in the woods with a stream running nearby and with features to accommodate both generations of the family and all pets including the horse…actually two horses. A friend of the daughter who boarded a horse at the same place the daughter boarded her horse gave her horse to the daughter when she was convinced that both horses would be better off together. Talk about a silver lining!

Yes…this was…in over twenty years of practice…my most unique and challenging transaction. And one of my most fulfilling transactions, too.

Wow, that certainly had a lot of ups and downs. I bet everyone was excited when they finally got to the closing table(s)!

At some point in life you learn that if you can think it...it happened to someone

All is well that ends well.  I have always believed that when a deal does not materialize it is because something better is coming.

I had one of those. The COE was scheduled to be completed on Tues at title company. On Sunday the kitchen was on fire. The fire dept is across the street on a Sunday. Long story short I cancelled the contract.

That takes the cake for sure. Good luck trying this with Zillow. At least, if you still want your shirt on afterwards.

Wow! That was challenging. Glad it finally worked out for all and hoping Paradise is getting back on it's feet.

Well, that was an interesting process, to say the least. but you made it through to the end and all parties made the move they wanted. Good job Sir.

John!  Talk about persistence! Glad they had you in their corner!  But what happened to the snake? :)

You and your sellers hung in there together and it all worked out - perhaps even better than it would have had they been able to purchase the first house. Congratulations on a job well done!

John, your clients were fortunate you were at the helm on this. When stuff hits the fan, true experience, professionalism and will to succeed rise to the surface and people take note.  I'm sure many in Paradise are grateful and tell their sphere about your efforts.  Best wishes for fastest recovery for all residents there in 2020.

Hi John,
Congratulations on being able to get the deal done.

Interesting journey John! In NC the sellers could have been forced to sell! We have case law where the courts forced sellers to complete the contract

That was such an unbelievable tragedy in Paradise.    Good thing those buyers let your sellers out of the contract.    Delightful that it all worked out in the end for your clients.    Ah the ups and downs, twists and turns of real estate!

Real Estate can be like a Roller Coaster ... up, down, all around, crazy! Interesting story!  In the end -- all ends well. Thanks for sharing.

Congratulations to all. That is quite a story, and I'm so glad to hear it all finally worked out despite all the challenges.

At th end of the journey a deal was closed and all were happy. Congratulations for hanging in there.

John I believe many of us here in California can say we had some of the most unique transactions in the past two years and indeed yours is up there, Endre

Wow! Amazing story of perserverance and a lot of work on your part.  Good for you for sticking with them to the end and making it all come together for them.

All the way from June until now that’s quite a journey! May it become better and better.

The best thing to take work and perseverance and they feel that much better once they are finally accomplished.