Thin Air (2014) is thriller volume number six in the Shetland Island series featuring Detective Inspector Jimmy Perez by international bestselling English crime writer Ann Cleeves. Dolores and I have enjoyed this series and recommend these novels for your reading list. I do suggest reading them in order of publication. Click on the links to learn more about the author and her many books.

A group of old university friends leave the bright lights of London and travel to Unst, Shetland's most northerly island, to celebrate the marriage of one of their friends to a Shetlander. But late on the night of the wedding party, one of them, Eleanor, disappears - apparently into thin air. It's mid-summer, a time of light nights and unexpected mists. The following day, Eleanor's friend Polly receives an email. It reads like a suicide note, saying she'll never be found alive. And then Eleanor's body is discovered, lying in a small loch close to the cliff edge.

Detectives Jimmy Perez and Willow Reeves are dispatched to Unst to investigate. Before she went missing, Eleanor claimed to have seen the ghost of a local child who drowned in the 1920s. Her interest in the legend of the ghost had seemed unhealthy - obsessive, even - to her friends: an indication of a troubled mind. But Jimmy and Willow are convinced that there is more to Eleanor's death than there first appears.

Is there a secret that lies behind the myth? One so shocking that someone would kill - many years later - to protect? 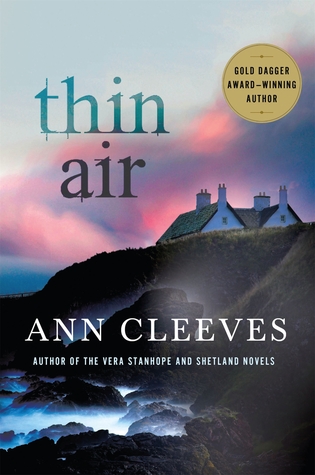 Good morning, Roy... at this point I'm beginning to feel like I'd have to take half a year off from work just to plow through all of Ann Cleeves' books!

Roy, agree with Nina, looks like you have lots of books to read, and could never keep up with you.   It is a good time to read, lots of snow outside!

We're traveling today and I will be reading. Thanks for another Cleeves suggestion, Roy.

I wish we were traveling somewhere, so many books on my list thanks to you. Cheers, A

There is no question about it, Roy.  You are the swiftest reader I've encountered!