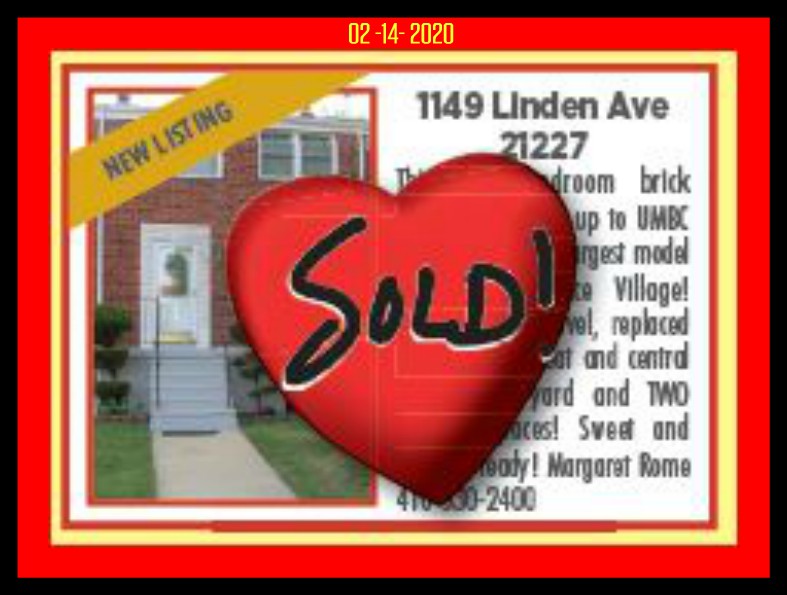 It was a Monday, thirty-three days ago, that I first spoke with Megan about listing her Baltimore home.

Look at this timeline

January 13 Our first conversation and a first blog

Today Megan, John, and I met for the first time, and it was at the settlement table.

We've had an excellent rapport for the past 33 days, and we all felt a bonding from the beginning. In thirty-three days, we probably know more about each other than many others who have had long term friendships.

John and Megan reminded me of another January 16th and my best close ever.

The final settlement was at one and then a celebratory lunch at 2.

We found the lucky buyer for your home! Well, that was quick, just the way we like it.

Good morning, Margaret! John and I have enjoyed some pretty spectacular birthdays and anniversaries together, but for the first time Valentine's Day became a massive celebration for us, in no small part because we finally got to meet you in person.

During our second phone call on January 13, you said, "I like you and want to work with you. Are we doing this?" I said, "I'm doing this if you're doing this!" And here we are, on Day 34, down one house (the original purpose), and up one great new friend (the surprise and lasting outcome). Your background as a nurse also came in handy during our brief real estate journey. You coached us through a trip to Urgent Care one Saturday afternoon, then encouraged me over the phone the next morning at the ER after a bad fall on icy steps. Your words to me while waiting on concussion protocol and spinal X-rays for John: "If a problem can be solved with money, it's not a problem." Even though in the middle of negotiations on 1149, your words of comfort on the real problem at hand - my husband's health - will stay with me forever. Then, later that morning, after being cleared of major injury, John and I returned home, and I promptly followed up on your negotiation advice, to great success!

Today at the settlement table, followed by the lunch table, we confirmed what we already knew. Margaret, you are one special lady. Thank you for deciding to work with us. Our experience selling our home "The Home Rome Way" was delightful, beginning to end. Never doubt - you will be hearing from us when we are back in Baltimore.

Good morning Margaret Rome, Baltimore Maryland - that was a wonderful Valentine's Day for all of you.  Sometimes people click and trust is formed instantly.

How wonderful, both this post and the note from Megan above! Making new lifelong friends is one of the benefits of a real estate career choice.

I closed escrow on my own home on Valentine's Day 1983.  I put it into contract late on Christmas Eve 1982.

Hello Margaret - a nice timeline presentation and as usual, this closing came together due to your superb knowledge and handling of the details.

What a great story and a wonderful testimonial from your cleint as well in your comments.

What a wondeful Valentine present!  And I love the comment from your client.  Sweet!!

That was a wonderful story Margaret. So happy for you both & for it to happen on Valentine's Day makes it even more special. Congratulations!

Deepak Chauhan Thanks for being the first to comment.

My Dear Megan and John, You keep surprising me with your kindness and our bonding. I am going to take this comment and make it into a stand-alone post. I love that you are taking the time to count the days. Each one is a gift.

What a wonderful Valentine's day spent with both of you.

Well done my friend, well done.  And I adore her comment.  Congratulations to your lucky sellers who called you and to you too.

Margaret Rome, Baltimore Maryland - Everything you do, you do so well! There are no exceptions to doing business the Rome way. Congratulations on the sale of this home, fully adopted and purchased on Valentine's Day 2020.

Tammy Lankford, We were both incredibly lucky!

Patricia Feager, MBA, CRS, GRI,MRP  What a sweet comment! You know how to make everyone feel special!

Hi Margaret,
That was a quick sale with the outcome of long-term friends.  Love Megan's testimonial comment! A wonderful way to celebrate Valentine's day. Congratulations!

Carol Williams Everything about this transaction was wonderful! Thanks for stopping by.