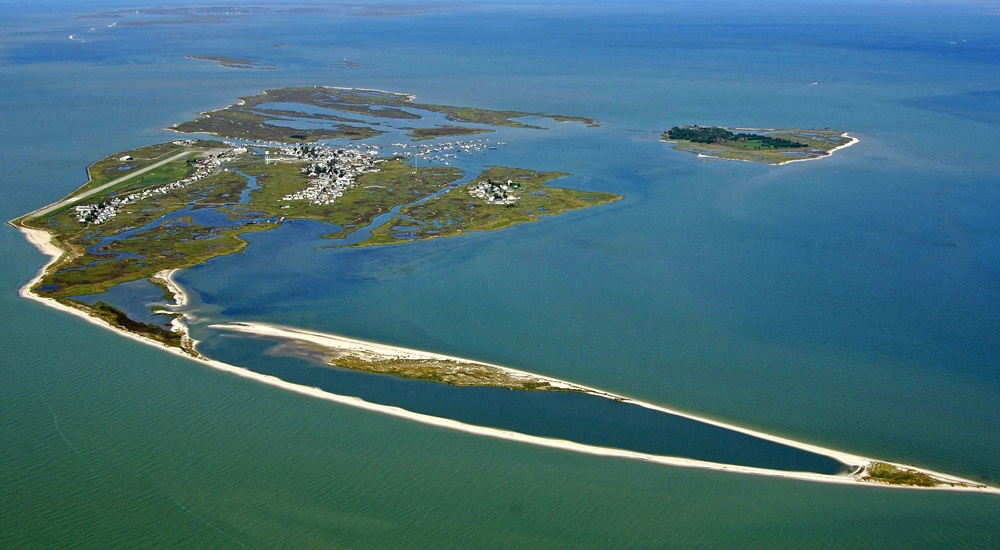 Have you ever heard of an Island off the coast of Virginia called Tangier? This wonderful piece of history is only a boat ride away. It is a shame that the state of Virginia, the Federal Government or both does not help to save this Historic Treasure.

Tangier is a town in Accomack County, Virginia, United States, on Tangier Island in Chesapeake Bay. The population was 727 at the 2010 census. Since 1850, the island's landmass has been reduced by 67%. Under the mid-range sea level rise scenario, much of the remaining landmass is expected to be lost in the next 50 years and the town will likely need to be abandoned.  This is what Wikipedia has to say.

The people who came to settle the island permanently arrived in the 1770s and were farmers. In the late 19th century, the islanders began to become more dependent on harvesting crabs and oysters from the Chesapeake Bay. As the waterman livelihood became more important and more lucrative, there were often conflicts among the oyster dredgers and oyster tongers in the bay, and between those living in Maryland and those living in Virginia.

I have been to Tangier and I just love this island.  Many people who live on Tangier speak a distinctive dialect of American English, Various scholars have disputed over how much of the dialect is derived from British English lexicon and phonetics. Linguist David Shores has noted that, while it may sound like a British variety of English, the dialect is a distinct creation of its own time and place off the eastern shore of Virginia.  The persistence of this dialectal variety is often attributed to the geographic isolation of the population from the mainland. Tangier Island is listed on the National Register of Historic Places. If you hear this dialect it is very charming.

Prior to the arrival of colonists on Tangier Island, it was a retreat for the Pocomoke Indians[13] for centuries. Although not much is known about these people, their existence is evidenced by the thousands of stone arrowheads that have been found all over the island. Almost any morning after gale-force winds have been blowing all night, new arrowheads can be found on the beach. The discovery of an ancient offshore oyster midden, thousands of years old and containing a huge pile of shells which could only have been deposited by humans, is further evidence that there was a regular population on Tangier, at least in the warm part of the year, long before it had an English name. The enormous numbers of arrowheads and spear points found here suggest the island was probably much larger than recorded history can verify and was home to many animal species.[citation needed]

The first known European explorer of the island was John Smith in 1608. He named Tangier and the surrounding islands the "Russel Isles" after the doctor on board his ship.

In 1670, Ambrose White received a patent for 400 acres (160 ha) called "an Island in the Chesapeake Bay". The next year, White assigned his patent to Charles and John West. In 1673, William Walton was granted 400 acres (160 hectares) on the western island which was formerly patented by White. There is a similar entry in the patent book three years later, but Scarburgh and West were the recipients instead of Walton, and in 1678, a formal patent was issued to both of them. Charles Scarburgh (often now spelled Scarborough) left his interest to his wife Elizabeth in 1702, and John West's interest went to his eldest son a year later. In 1713, two patents were granted to Elizabeth Scarburgh and Anthony West for Tangier Islands. One was for 900 acres (360 ha), which included the original 400 acres (160 ha) plus 500 acres (200 ha) more found within its bounds. The other grant was for 170 acres (69 ha) of new land south of Tangier called "Sandy Beach Island" which was probably the hook-shaped part that is now attached to the main of the island. This was the first time Tangier Islands was named in the records. Although Elizabeth Scarburgh left her interest to her daughters, the title went to her oldest son, Bennett. It then passed to Henry Scarburgh and then to a Charles Scarburgh. In 1762, Charles Scarburgh confirmed an undeeded sale of his half to Colonel Thomas Hall. The next year Hall sold this to William Andrews as 475 acres (192 ha).

Today many of the inhabitants have the surname Crockett, which was the name of the first permanent Anglo-American settler in the late 18th Century. Other common surnames on the island include Pruitt, Thomas, Marshall, Charnock, Dise, Shores, and Parks. By 1900 there were 1,064 inhabitants.

The British used the island as a staging area in 1813–1814 under infamous Rear Admiral George Cockburn during the War of 1812, building Fort Albion when there were as many as 1,200 British troops recorded on the island at one time. Many slaves escaped to the British on Tangier and were given their freedom. Some joined the Corps of Colonial Marines. When a dozen British sailors were captured, their account of hardships encountered with shortages of food and water on the island, and the building of Fort Albion, were reported in a local newspaper. Tangier was used as the base for the attack on the American capital in the Redcoats' stunning victory at the Battle of Bladensburg and the subsequent Burning of Washington in August 1814. This was followed by the Battle of Baltimore, when a failed British naval bombardment and barge assault on Fort McHenry in Baltimore harbor and simultaneous land Battle of North Point southeast of the city on September 12-13-14th, 1814, influenced Francis Scott Key's writing of the poem that became "The Star-Spangled Banner", named the American national anthem in 1931.

The original church on the island was called Lee's Bethel and burned down in the 19th century. A bench marking its location is in the graveyard in Canton. The present-day church on the island, Swain Memorial Methodist Church, was established in 1835. The other church is called the New Testament Congregation, established in 1946, a non-denominational Christian place of worship. For various reasons, both historical and practical, burials are sometimes located in the yards of houses. There are also churchyard cemeteries at each of the island's churches.

Three 21st-century hurricanes, Isabel in 2003; Ernesto in 2006; and Sandy in 2012; caused much of the island to flood. A few houses were abandoned or torn down due to storm damage, while others have been elevated on new foundations. New buildings continue to be built on the island.

In the 1960s, the US Army took over portions of Tangier Island by eminent domain, forcing some residents including Walter Crockett and Maggie Eskridge Crockett to move to the mainland (Exmore, Virginia), so the US Military could conduct missile testing.  Many of Tangier's residents believe that these operations were part of the reason for current erosion problems.

Many residents believe that erosion is the cause of the increasing incidence and severity of flooding.[21] A 2015 study by a member of the Army Corps of Engineers concludes that Tangier has 25–50 years of habitability remaining and that the subsidence of the ridges is ongoing since at least the mid-19th century. The authors also conclude that the primary causes of the subsidence in the southern Chesapeake Bay region is sea-level rise due to the melting of the Laurentide ice sheet, groundwater extraction on mainland Virginia, and the remaining effects of the Chesapeake Bay impact crater near Cape Charles, Virginia 35.5 million years ago.

The town has been talking with political representatives for decades to get protection for the island in the form of jetties or sea walls. The Town, the History Museum, and townspeople continue to raise money for their sea wall fund.  In 2017, CNN aired a story about Tangier that featured the town's Mayor, James W. Eskridge. President Donald Trump called the mayor personally to assure him that the town would survive.

The modes of transportation off the island are boats and airplane. There is an airport, open from dawn to dusk.[29] There are two boats that travel regularly from Crisfield, Maryland, across Tangier Sound to Tangier. Passengers and mail are carried on these boats. The mail boat, the Courtney Thomas, leaves Tangier at 8:00 am and leaves Crisfield at 12:30 pm. The Steven Thomas, a 300-passenger cruise boat, leaves Crisfield at 12:30 pm during the summer season from Memorial Day weekend through mid-October and departs Tangier at 4:00 pm. In the summer season, the Chesapeake Breeze travels daily from Reedville, Virginia, on the Western Shore, leaving Reedville at 10:00 am and leaving Tangier at 2:00 pm. The ferry service to and from Onancock, Virginia on the Joyce Marie II runs daily from the first weekend of May through the first weekend of October. I have done this and it is a wonderful trip.

Transportation on the island does not rely heavily on automobiles. Some residents outfit golf carts with passenger trailers to offer "historical tours" of the island for tourists. The roads on Tangier are wide enough for two golf carts. Tourists and islanders often use golf carts, boats, mopeds, and bikes, but some have trucks and cars.

With all the means of transportation and regular telephone service, residents have regular ways of staying in touch with the mainland. The island also has cable television and internet service. There is a calm, peaceful atmosphere on the island. It has several restaurants, four gift shops and a hardware store. Violent crime is virtually nonexistent.[citation needed] There are two bed and breakfasts for overnight guests, and a wild beach without a boardwalk or concessions. There is a historical museum and interpretive cultural center. There is one ATM on the island. Most of the gift shops, eating establishments, and overnight accommodations accept credit and debit cards. Tangier is known for its seafood dishes, especially its soft-shell crab sandwiches. These can be found at its restaurants including the Fisherman's Corner. Children sometimes sell lemonade and Christmas decorations made from sea shells to tourists. In the evenings, children unwind at a playground near the school, or at the 1950s-style air conditioned ice-cream parlor on Main Ridge called Spanky's.

The major new addition to the island has been the Tangier Island History Museum, which created the historical markers that line Tangier's streets and provide a "historical tour" of the island. Tour guides are also available to offer visitors a narrated ride around the island. The museum's artifacts are donated or loaned by local residents. The museum also operates a small community library, "Muddy Toes." Visitors often rent kayaks to follow local "water trails." These trails guide visitors around the watermen's crabbing shacks built on stilts in Tangier Harbor, to navigate the saltwater "guts" that separate the island, or to visit "the Uppards", a marshy island just to the north of Tangier that used to have a sizable community until it was abandoned in 1928. Immediately to the east of Tangier, also a kayak paddle away, is Port Isobel, a small island owned by the nonprofit Chesapeake Bay Foundation, which operates an environmental study and retreat center there; on nautical charts, this bit of land is called East Point Marsh. Port Isobel's hiking trails are open to the public. The low-lying marshland is ideal breeding grounds for mosquitoes and biting flies, so bug repellent is strongly recommended for anyone visiting.   https://www.tangierisland-va.com/

I had no idea, what an interesting story you shared with us.  I had no idea, and I am always learning something new on Active Rain.  Cheers. A

Good morning Elaine. What you can learn in the Rain amazes me on a daily basis! Thanks! Enjoy your day!