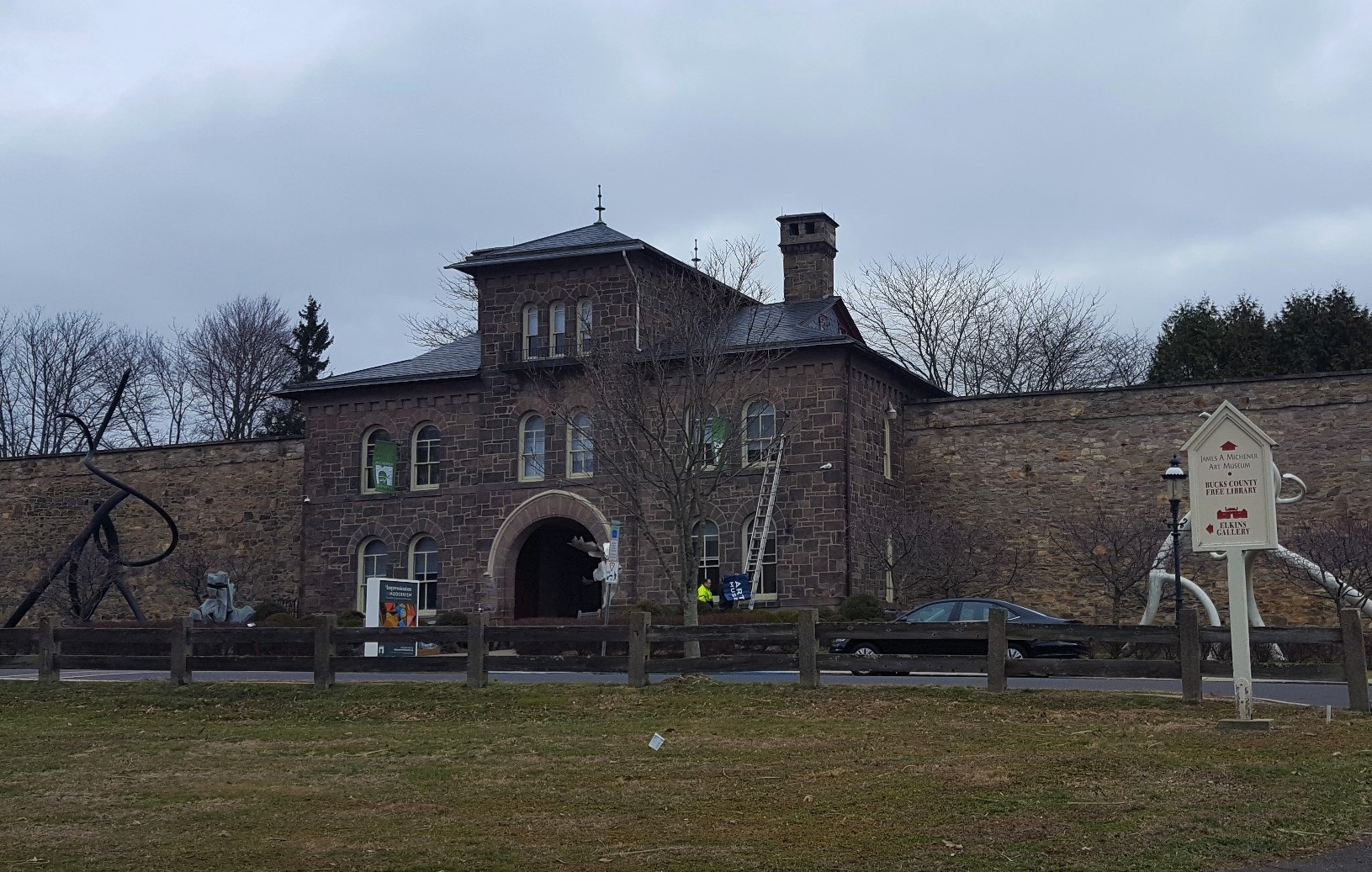 Yesterday, I traveled about an hour north of Wilmington Delaware to the James A. Michener Art Museum in Doylestown, Pennsylvania. Begun in 1884 as the Bucks County Prison, it was transformed 100 years later into an art gallery.

Philadelphia architect Addison Hutton had designed a 3-story warden's house and guardhouse using Italianate and Romanesque Revival styles inspired by Quaker ideas of reflection and penitence modeled after Philadelphia's Eastern State Penitentiary, built in 1829 and designed by John Haviland.  The Michener didn't seem so creepy until I found out more about the history, expecially in a video posted online by a young scholar.  Yikes--walking over the gallows!

Named after the famed writer of Hawaii (a book I bought years ago and was so cowed by its size that I never finished it) the museum's collection includes works by painters of the Pennsylvania Impressionist or New Hope school, American primitives and moderninsts as well as abstract expressionists from the University of Texas collection of James A. Michener and his wife, Mari.

Many of the Michener painings were done by Edward W. Redfield, a native of Bridgeville, Delaware, who is best known for works in oil painted in nearby New Hope, Pennsylvania. Redfield, whose impressionist landscapes are noted for their bold application of paint and vibrant color, would paint en plein air, sometimes tying his canvases to trees to prevent them from blowing away in the wind, finishing them in one mad effort before returning home for the day. (photo:Winter) Wandering outside and through what I would call a portcullis which originally brought prisoners into the prison, I felt a chill and could almost hear the doors slam behind me and the jangle of the jailer's keys as the doors were firmly bolted.  Well, guess it wouldn't be so bad to be locked inside with all the art. Unless things started to creak and go bump in the night!

Fascinating adventure and history, Carolyn.  I'll bet those living in or visiting Bucks County would really enjoy a visit there.

Thanks for stopping by, Myrl!

You have a lot of history in your area, Carolyn, and I enjoy the recounting you share here.

Good morning Carolyn. What a story. I am originally from Philadelphia and grew up on Michener Street.

Sheila--I didn't know there was a Michener St., but probably named long before the writer!

Thank you for sharing your fun adventure with us. I love repurposed old buildings.

Gwen--This certainly is a pleasing conversion!