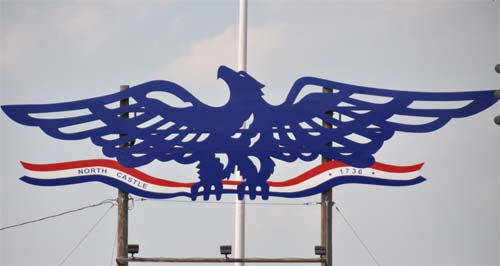 I have a choice of writing about one of two communities for this contest. I love them both.  However, I have much more to write about our home for 32 years - Armonk, NY  10504, in the Town of North Castle.

We were attracted to this community for the same reason many are attracted today.  Armonk is a jewel in Westchester County NY.  It is a desired location along with Chappaqua, Scarsdale, and Bronxville.  These are all fine communities with top rated schools but Armonk has a great advantage to buyers over the other communities.  Years ago Armonk attracted corporations to the town most notably the world headquarters of IBM.  Companies like IBM, Swiss Re and others are clean responsible corporate citizens who ease the the property tax burden.

The taxes per assessed value are the lowest of the communities mentioned above. Armonk has a top rated Byram Hills School system. Byram Hills High School seniors take top national honors each year in math and science scholarships.

Take a walk here with us.

Armonk has four very notable events during the year.  In June every year the Armonk Lions club sponsors the Fol del Rol.  This event of amusements, attractions, craft booths, and bands attracts thousands in the Lions donate the money to Armonk improvement projects. During a number of Summer evenings concerts are held in Wampus Brook Park by the Armonk Gazebo.  We have had many well known performers. Then in September we have the Armonk Outdoor Art Show.  Artists from all over sell their painters including local ones.  We have a picture of the Schultz Cider Mill in our dining room. In December every year we have the Frosty Parade.  The man who wrote Frosty the Snowman lived in Armonk.  This is combined with the start of holiday decorations. These are just some of the reasons why people in Armonk love where they live.  Armonk is a quiet country community hidden inside the greater New York City metropolitan area.  You can drive a few short miles down Route 22 along the Kensico Reservoir to the North White Plains train station.  Then you can ride a 35 minute express train to Grand Central Station in Midtown Manhattan.

Hi Grant- you did an excellent job of capturing your town of Armonk, NY!!!  I can see why you love it there. I love the sidewalk tables where you can sit and enjoy the diners and shoppers.

What a lovely introduction to Armonk, NY.  What a fine entry into Jeff Dowler, CRS  March challenge.  I have been to Scarsdale years ago, when one of my college roomates grew up there, and she invited me for the weekend. A

All of our restaurants are closed for walk in business.  Armonk, NY., is our kind of town.  Pity, we live so far away

Good morning Grant. I really enjoyed reading about Armonk with you. I learned a lot.

Grant it sound like you really do love your town.  It is finding joy, gratitude and happiness right now that will get us through this crazy time.  Keep thinking of the things that you love and cherish them.  Stay healthy and happy my friend!

Armonk definitely looks and sounds like a great place to call home.  I will definitely have to visit there sometime.  I really like the video that you did, it gives me a much better idea of what living in Armonk would be like.

Grant, you have always done a great job raving about Armonk, and someday will need to visit!

Hi Jeff - as you know we are close to Boston and New England.  The ride up the coast of CT, RI, and MA is beautiful.

Paul - I have a feeling that the day this ends restaurants will be crowded.  I hope so.

Michael - thanks.  I am very glad you enjoyed it.

Kathy - love eating outside and sitting at these tables during the warm weather.

Ron and Alexandra A - the estate homes in Scarsdale and Bronxville are very well established over the years.  Armonk and Chappaqua are not as long established.

James - It is a pity.  Would love to show you around.

Sheila - thank you so much.  You would like it.

Norma - this is so true.  Look for the positive.

Joan - I would love to see you.

Grant you are very blessed to own properties and live in two excellent locations.

George - thank you.  I do feel blessed.

Grant, I loved this post and to boot that you drove down with your wife to meet up in Boston MA was even more impressive:)Endre

Endre - and it was worth every bit of the ride in the rain meeting with all of you.

Thanks, Grant, for telling us about your home community. The Lions Club picture reminded me of my years of Lions Club activities. A fellow Lions Club member introduced me to Dolores.

Hello Grant,  I know with two town to write about bwould be hard but you did a great job of explaining your New York town.

Love the video!  It sure looks like a cozy quaint town to call home.  Thanks for sharing.

Hi Roy - I am sure that you have great memories of the Lions Club.

Will - thanks.  I have the most context there.

Larry - it is a great community.

It sounds like a wonderful neighborhood and the special events through the year sound like a lot of fun and the perfect place to make your home.  Now I want to know about your other community.1

Raymond - Ok maybe I should write about that one where I have my home in Port St. Lucie, Florida.

What a wonderful introduction to Armonk, Grant! I totally understand why you love where you live so much now.

Thank you for participating in March's challenge too!

Nice job, Grant. I"m impressed you included a video tour of Armonk. It looks like a great spot to call home, when you're not in Port. St. Lucie. ;)