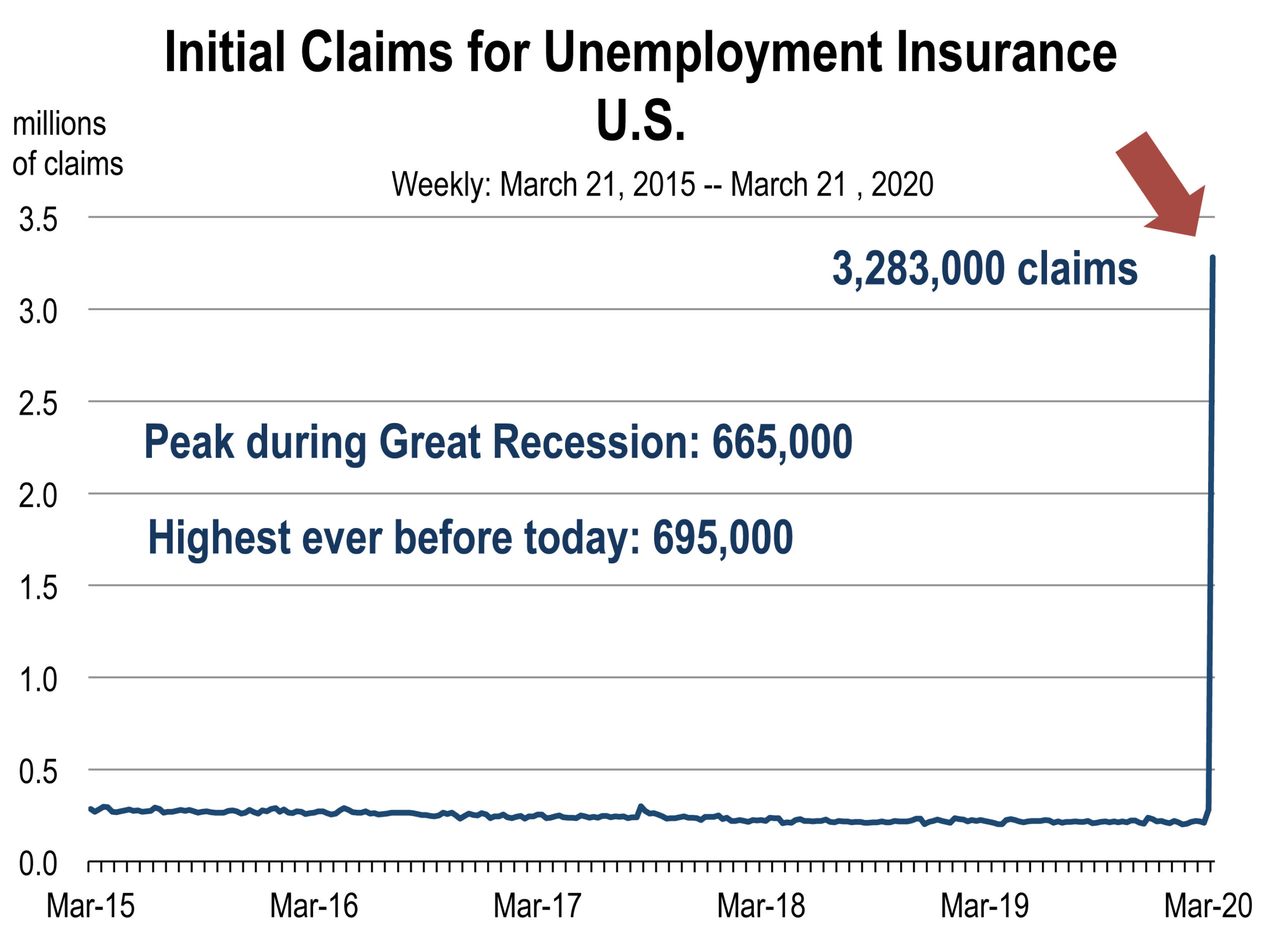 The rapid spread of the coronavirus has led to massive business disruptions in the U.S. over the past several weeks. A growing number of states across the country ordered residents to “shelter in place,” and non-essential businesses such as sit-down restaurants, retail stores, and any event supporting public gathering have been forced to close or shut down.

Effectively, federal and state governments have shut down the U.S. economy. As a result, the pace of layoffs has been so swift, new fillings for unemployment insurance have skyrocketed to historic levels.

On Wednesday night, the Senate voted 96-0 in support of the $2.2 trillion emergency package intended to avert economic collapse . The 880 page bill goes to the House for a vote on Friday.

Unemployment: Some Workers will be Getting a Raise

Under the package, all unemployed workers across the U.S. will be eligible to receive $600 per week in federal aid. They will also receive unemployment benefits from their state-level unemployment insurance departments.

There does not appear to be any limiting criteria associated with the $600/week supplement in unemployment benefits.

In California, state-level benefits cover half of the salary of anyone earning up to $46,800 on an annualized basis. Workers earning more than $46,800 receive the maximum of $450 per week. 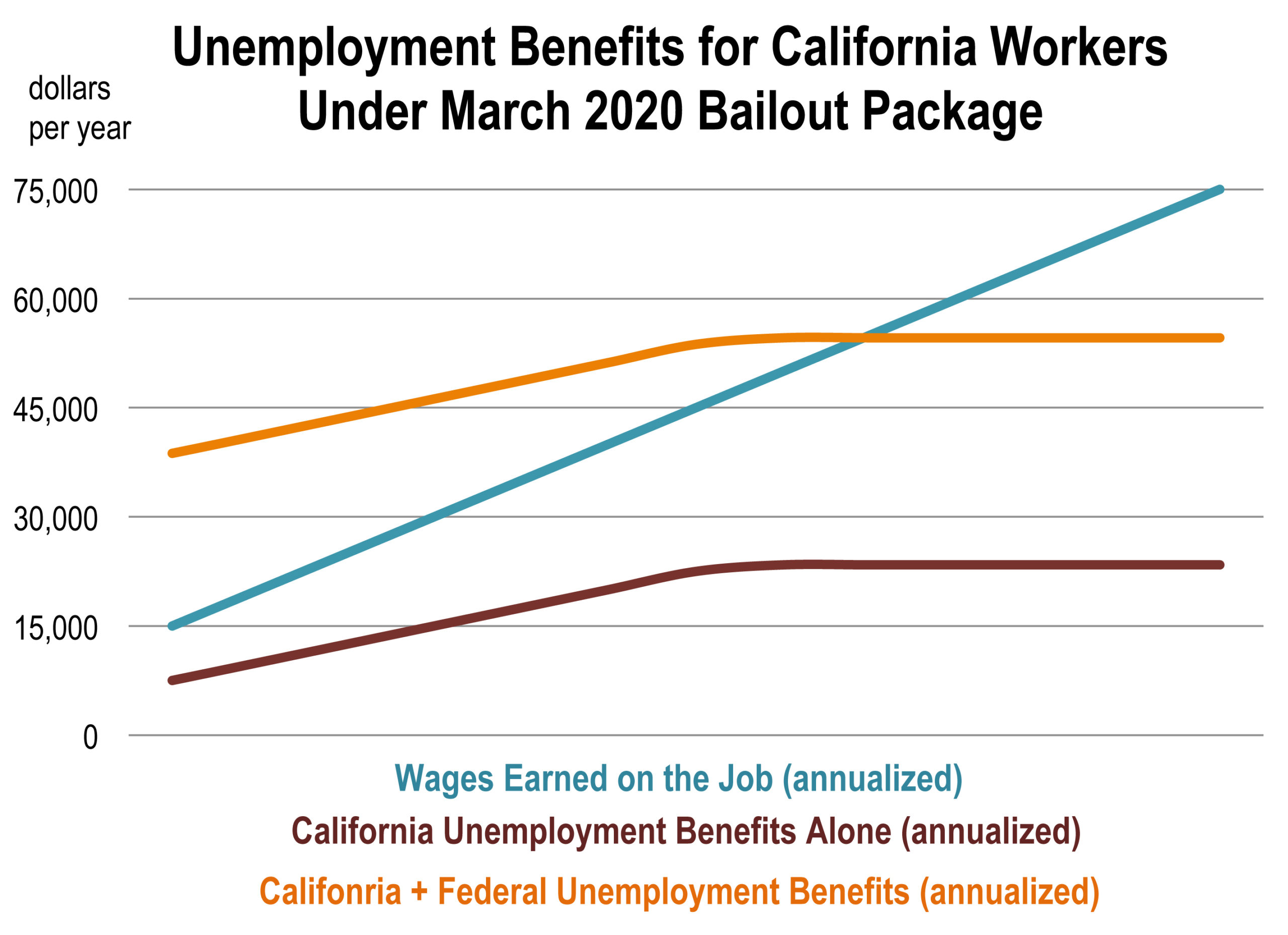 With state and federal aid combined, many California workers will begin earning more than when they still had a job.

For example, a full-time worker earning the minimum wage would have earned approximately $25,000 this year. Under the new bailout package they will receive $600/week from the federal government and $230 from California, leading to annualized earnings of $43,160.

The $600/week federal benefits are effective through July, so for the next few months, laid off workers in California that were making less than $54,600 will earn more from their unemployment benefits than they would have if they had kept their job, not counting things like employer-sponsored health insurance and retirement contributions.

Also in the bill: Gig workers like Uber drivers will be eligible for unemployment benefits for the first time.

The bill includes $50 billion for tax credits for firms that retain workers on their payroll and cover 50 percent of worker’s pay. Firms will also be able to defer payment of Social Security payroll taxes, which are 6.2 percent of the first $137,700 in wages for each of their employees. 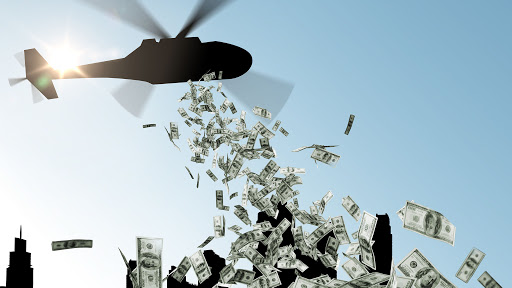 Persons earning less than $75,000 in adjusted gross income will receive a stipend of $1,200. Households with two workers will receive $2,400. The stipend rises by $500 with each child. The subsidy phases out at higher incomes and no subsidy would go to individuals earning more than $99,000.

Much of the subsidy will be used to finance food and shelter expenses that have been distressed by the loss of a paycheck or business revenues.

There is $850 billion in guaranteed loans being made available to businesses, both small businesses and distressed businesses of any size. This type of program could prevent many firms from permanently shutting down if the funding can be received during the month of April. Some businesses could still be saved if the loans arrive in May.

The bill includes $130 billion in cash payments to hospitals to finance resources. Many hospitals need to acquire new resources, including ventilators and hospital beds, to be prepared for a potential surge in patients.

How Significant is the Rescue Package?

Two trillion dollars represents a sizable volume of potential funding for the U.S. Economy. Total gross domestic product for 2020 (in the absence of the pandemic) was expected to be $22.1 trillion.

The $2.2 trillion bailout therefore represents 10 percent of annual GDP, or just over 5 weeks of U.S. economic activity. If, hypothetically, somewhere around 20 percent of GDP were lost due to the pandemic, then $2.2 trillion would offset about 5 months of economic loss, provided that consumers and businesses spend the bailout funds, rather than put them into savings.

Since much of the package takes the form of loans, nearly half of the amount would be returned to the U.S Treasury over time. The remaining $1.3 trillion represents a supplemental increase to the national debt, and will ultimately have to be repaid with higher taxation in the future.

California’s statewide “Shelter in Place” orders could shutdown 28 percent of the job market. It’s an astounding situation that has virtually no comparable precedent.

We’re talking about 5 million jobs across 400,000 firms, a scenario that dwarfs the 2008-2009 recession when the state lost 1.1 million jobs over the course of 18 months. The coronavirus pandemic has unfolded over just a few weeks.

To arrive at these estimates, we did an industry-by-industry accounting of the jobs that were deemed “essential” by the State Public Health Officer.

Along with the jobs at risk, California residents could incur $21 billion in lost wages for each month that the “Shelter in Place” is in effect. Some firms are furloughing their employees with full pay and benefits, but most companies simply can’t afford to do so without an enormous amount of government support. 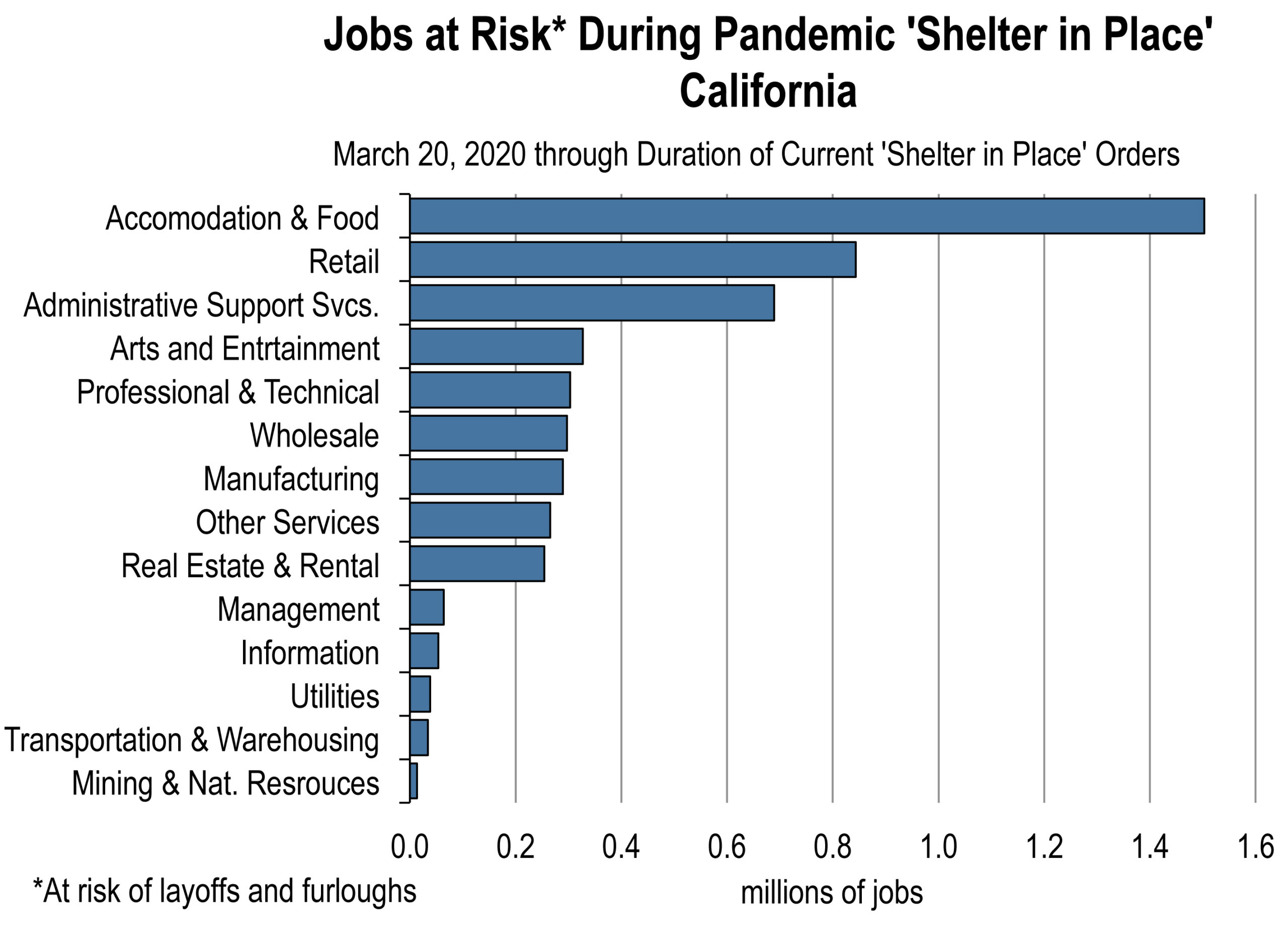 The $2 trillion bailout package, which is close to being finalized, will do more to expand unemployment benefits than keep workers from losing their jobs.

The number of statewide layoffs has already broken records and is expected to surpass 700,000 for the week ending March 28th.

In a hypothetical scenario where all 5 million workers at risk are laid off completely, the California unemployment rate would approach 30 percent.

That’s unlikely to happen, and we don’t even know if the official statistics will be able to capture the full magnitude of the downturn.

Many of these layoffs and furloughs will occur in the second half of March, meaning that they won’t appear in the unemployment rate until April.

But everyone should be prepared for economic data that would have seemed unbelievable in almost any other context.

COVID-19: The Economic Impact We Can See to Date

As the coronavirus containment measures escalate in the U.S. (and around the world) including closing all schools, bars, restaurants and entertainment venues, and Governors issuing shelter-in-place orders in many states, the strains on economic conditions are rapidly changing.1

It is estimated that 10-20 days after full lockdowns, we should observe a decline in the infections rate. That is not yet occurring as of today. There is no full lockdown yet, but I’m guessing that is forthcoming soon.

Testing for the virus has ramped up sharply. Outside of various places like Los Angeles County, the testing policy is following that of South Korea and Singapore which produced rapid results in containing infections.

But shelter-in-place policies and closing restaurants, bars, entertainment venues, concerts, conferences, conventions, all schools, and banning travel into the U.S. has resulted in a corresponding shutdown of the economy. Job losses due to layoffs are staggering, and have largely impacted the massive food away from home sector, hotels, airlines, trucking, fitness centers, salons, car dealers, and the business support sectors.

Initial claims for unemployment insurance, one of the earliest indicators released weekly that we can use to ascertain the labor market damage, is showing record levels of new claimants (due to job loss).

The precipitous decline in employment reduces income necessary to finance day to day expenditures and discretionary spending. The 33 percent freefall decline in the stock market in 19 days will cause households to further pull back on spending.

The decline in workers and their spending, and a general decline in spending by all households because few stores are open, will necessarily push the economy into a deep contraction.

The latest forecasts for the growth rate of GDP in 2020 Q2 by some of the principal Banks and Investment houses, including the UCLA Anderson Forecast, are astounding.

And Treasury Secretary Steve Mnuchin reported the potential for the unemployment rate to go as high as 20 percent nationwide without government intervention in the form of economic stimulus.

So we are anxiously awaiting what type of stimulus package Congress will pass in the coming days that the President will sign. We will provide an updated commentary on the substance of the federal bailout program later this week.

Amidst new policies enacted over the last two weeks, the impacts on the California economy are unprecedented, and the front line impact is on jobs.

Food preparation and service away from home, which is now limited to take-out and delivery, constitutes approximately 50 percent of all food consumed in the U.S. Eliminating sit down service at virtually all restaurants, bars, cafeterias, school dormitories, concession stands, and food trucks, could potentially idle up to 1.45 million jobs in California.

Airline layoffs could impact up to 30,000 workers. We estimate as many as 165,000 hotel workers have been or will be laid off.

Shutting down non-essential retail stores could impact 621,000 workers. And shutting down the arts, entertainment, and recreation services impacts 323,000 California workers.

Trucking and boating will be impacted. Trucking will recover earlier as supply chains and cargo deliveries are restored at California ports.

Many workers in non-essential industries will work from home, including many in the professional services, information services, the public sector, and education. However, administrative staff and business support services workers could be laid off with the closing or scaling back the use of office space, conferences, meetings, and business events.

Jobs in healthcare services, IT, food delivery, megastores (like Costco and Target) and some manufacturing will increase, but the gain will hardly offset the substantial losses elsewhere. 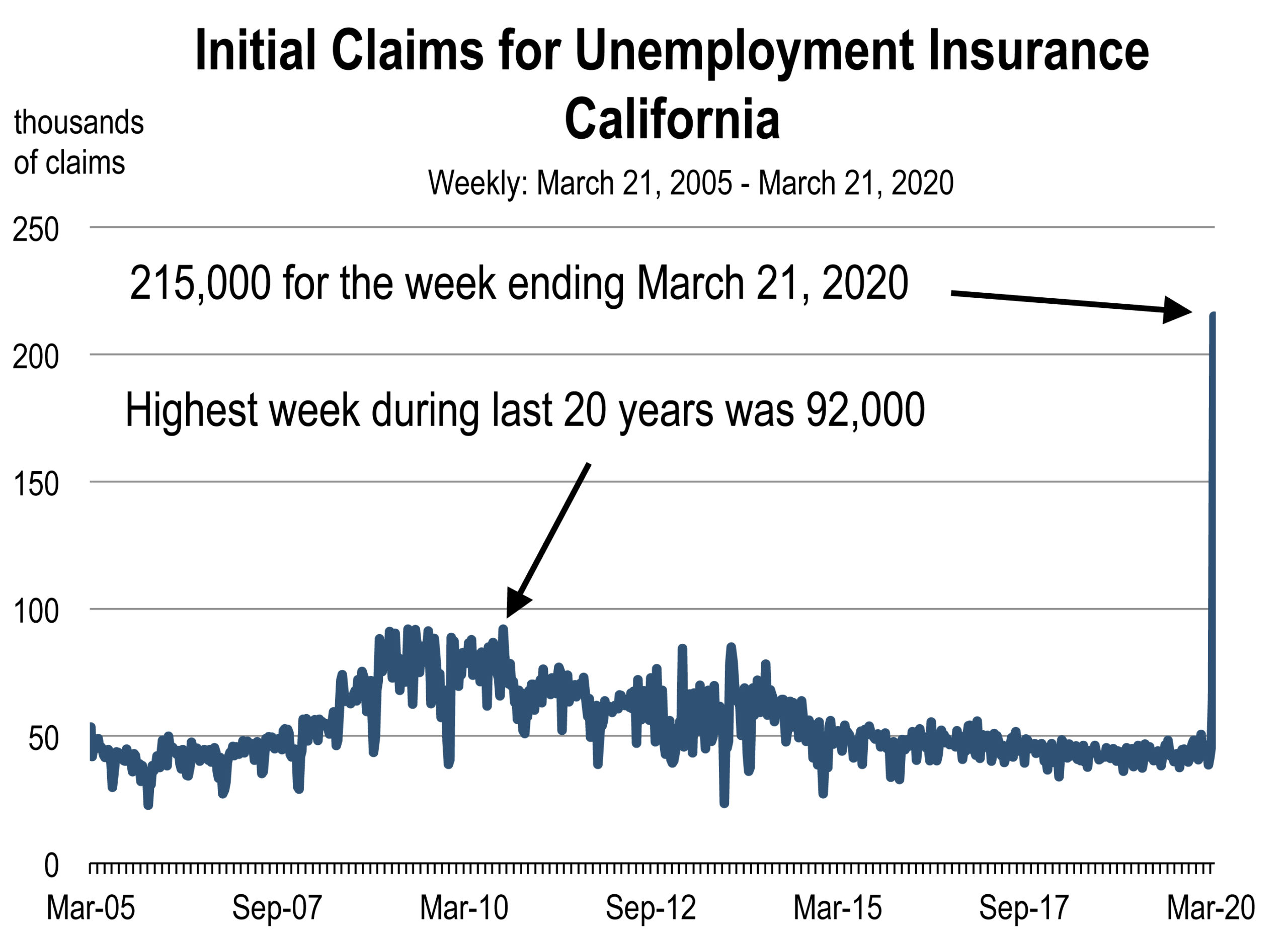 We are entirely uncertain of how employers will implement reductions in staffing, be it with layoffs, furloughs, or as needed, but the potential for record numbers of layoffs is now present in California. And this would generate a staggering increase in the unemployment rate.

Analysis of the initial claims for unemployment in California for the week ending March 21, 2020 show an unprecedented and spectacular increase in the estimated number of claim filings. The level for the most recent week is nearly 5 times the previous week ending March 14.

The March 21 reporting is based on the number of Californians who applied for unemployment insurance last week. These numbers may be revised this week, based on California workers who successfully filed. The number of workers who were eligible to file and attempted to do so may be much larger.

Nevertheless, it provides us a strong and early indication of the extent to which the labor market misery will be felt in California.

If the majority of the workers from these impacted sectors are laid off, look for the unemployment rate to soar (from 3.9 percent in January) to 6 or 7 percent in April, perhaps even higher. Job loss during April could conceivably push upwards toward 1 million jobs.