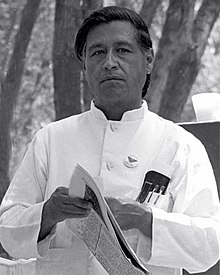 orn in Yuma, Arizona, to a Mexican American family, Cesar Estrada Chavez began his working life as a manual laborer before spending two years in the United States Navy.

After relocating to California, he married and got involved in the Community Service Organization (CSO), through which he helped laborers register to vote. In 1959, he became the CSO's national director, a position based in Los Angeles.

Through the CSO, Chavez launched an insurance scheme, credit union, and newspaper for farmworkers. Later that decade he began organizing strikes among farmworkers,

After he left the CSO, Cesar Chavez and Dolores Huerta co-founded the National Farm Workers Association (later to become the United Farm Workers union, or UFW) in 1962.

With his pro-union and nonviolent tactics, Chavez helped the farm workers' cause to generate broad nationwide support, most notably the Delano grape strike of 1965–70, which brought worldwide attention to the plight of U.S. farm laborers and migrant workers. He is famous for popularizing the motto, "Si, se puedes" (meaning "Yes, we can" in Spanish).

Cesar Chavez Day was first proclaimed in 1994. It is celebrated in California, Florida and Texas. It is a legal holiday in California.