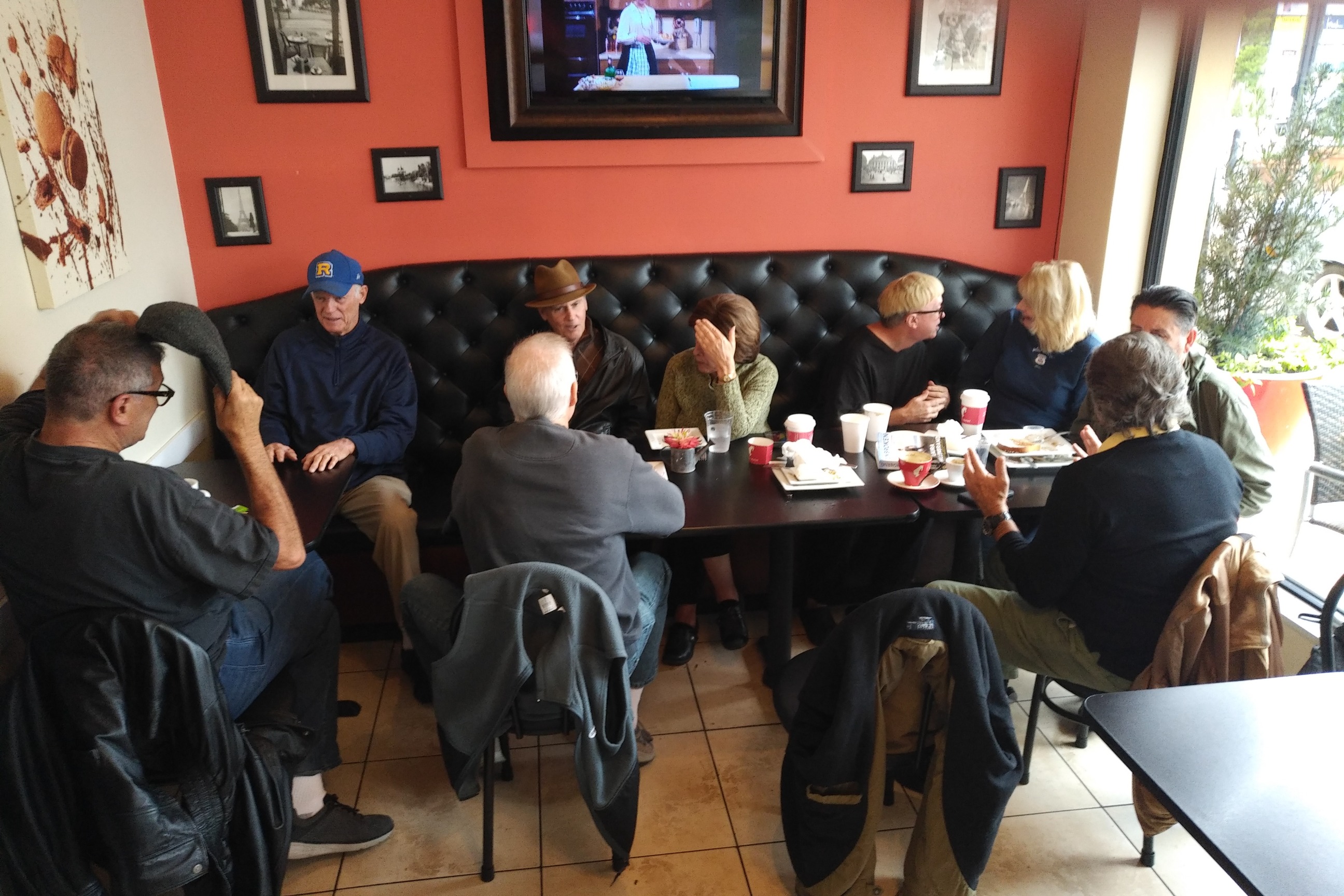 As a break to all the vital announcements and pronouncements day to day in the last three weeks, we have all started to watch some movies on TV for a mental break...

Oh, look! Here are three unusual characters prancing around with a little girl, arm in arm, speaking loudly in each other's face!  And then a huge world of midgets swarming around and filling the screen.  This was The Wizard of Oz.  Wonderful times.  And in view of the current 'social distancing' rules, looking back at how we all interacted with each other... is rather shocking. The Way We Were

Top photo above was taken in my favorite pastry shop in Winter Park about two months ago.  Here we were crowded and nearly shoulder to shoulder.  Amazing!  We loved it.  A lot of fun!  If we have to continue staying away each other much longer I think we will have a spate of psychological problems on top of the pending economic ones, which now seem to be looming larger.

Here are some of the folks in the first photo above three days ago, outside Croissant Gourmet in the median: While outside is a nice spot to be on a good day and we have a lot of those in Florida, it will get hot and muggy soon and air conditioning would be great.  But, only three are allowed inside at any time for take-out.  Things are getting tough for the defiant.  We may have a mandatory mask edict coming soon here in Florida.  What will happen if it snows?

I wonder if it occurred to a few others that the medical team modeling COVID-19 were warning with great solemnity that THIS week the deadly effects of the virus would strike us.  Most have been waiting for the worst, cowering in fear that we too would be struck.  Much as the Hebrews were told to mark their doorposts with the blood of a slaughtered spring lamb in order to be 'passed over' by the wrath of God who killed the firstborn of Egypt, it seems we all have been hoping to be spared as well!

Other Similarities of COVID-19 to the European/Asian Black Plague

The most ironic aspect of the current pandemic is that no modern scientific medical breakthrough has been able to quell the spread of the virus.  We are basically told to stay away from each other!  There is really nothing 'high tech' about this edict from the medical community.  This is what eventually slowed the spread of the Black Plague and stopped the Spanish Flu.

Preventatives are being developed/tested at this moment to treat early signs and lower the chances of morbidity.  The final irony is that, if proven medically sound through agonizingly slow testing, we will have had at least a simple answer to COVID-19 in a malaria drug used for over 50 years... that could have been administered worldwide at the very beginning!

So I leave everyone with good wishes and a nice snappy tune to keep the spirits up...  enjoy, because you may never hear a ditty like this in a similar venue for several months or years to come(!)

here is another version for a replay!  https://www.youtube.com/watch?v=2Wf3McVNhXI

whoa!  people eating dinner together, dancing, AND listening to this song!! https://www.youtube.com/watch?v=pdCo6Fnasmw

one more with Ray Coniff and a tribute to Frankie boy.  check out the crowd: https://www.youtube.com/watch?v=H_PsSeKdPnM

Tags:
how we interact face to face has changed
precaution against covid19

You must sign in or register to leave a comment
Login Register
Show All Comments
Rainmaker
3,649,285
Michael Jacobs
Pasadena, CA
Los Angeles Pasadena 818.516.4393

Hello John - a bit of a different journey than I might expect but well-worth the read.

Hi, Michael Jacobs I had found a photo of the morning gang in my phone and was amazed at the close quarters.  I had taken another picture recently and compared.  I also had the thought of Passover being a similar modern deathly threat of the virus to many of us.  The other research was built on a few obvious similarities and then I dug a little deeper.  I had to end on a bright note!!  Thanks for looking into my rantings...

Thank you very much, John, for sharing this historical perspective.

Be safe and have a good week.

Perspective is always important, and history is a great way to see it.  Wishing you a great week ahead. A

Hi John Henry, Florida Architect - I have been watching Youtube on both of these plagues.  Things are different but things are the same.

Hello Roy Kelley  Glad you liked some of the history of these pandemics!

Hello Ron and Alexandra Seigel  Thank you for taking a look at the historic breakdown.  I still can't believe that over 800 years after the Black Plague, we are told to pretty much do the same thing now that quelled the outbreak back then.

Hi Grant Schneider It is pretty interesting how both started in the 'far East', affected Italy first and then port cities, etc. and that we just need to stay away from each other in order not to get infected.  hmmm