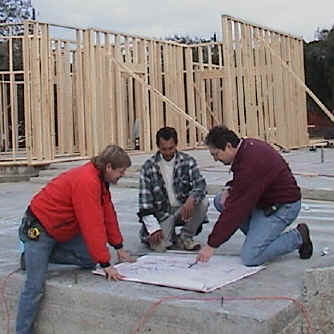 I just received an unsolicited call from an AV (audiovisual installations) company.  I could have just hung up or given a quick excuse to get off the line and back to doing what was 'really important'.

My guess was that the caller was going down the yellow pages and just cold calling anyone who specifies equipment on medium to high-end houses.

That would be me of course.  The introductory line was "We were just thinking of contacting some people in the downtime we have had of late..."  Really not the most tantalizing way of getting anyone's attention.

Obviously I was just a number to call on a piece of paper or computer list.

But I decided to listen for a few seconds and suggested that they send an email with their business information.

About five minutes later I received their email and responded with a short message that I would look forward to a time in the near future to get together.

It took me a few seconds to realize that this was a smart thing to do.  Because in my email response I have several links to my webs and videos that show up in the return email.  Even though this company probably had no idea who I was, they definitely do now.  And people talk...

Exactly 30 minutes earlier I received a referral (from an existing client) who called to ask about a very small remodeling project on the other side of town.  The combination of size and scope was not enticing at all and my instinct was to refer them to one of my draftspeople to work out on the side.  It was not my 'niche'.

But this time, in mind of the recently acquired client who referred me, I listened and asked cordially about what was to be done, the age of the house, the intended remodeling, if photos or blueprints were available, etc.

As I went through the typical info gathering on the phone, I was thinking that this person deserved some one on one with a principal instead of a quick handoff to a draftsperson.

I think a little consideration by us professionals every now and then will pay dividends in the future, even if the immediate situation is not your cup of tea.

If not, it should make all of us feel better about ourselves at least!!!

Suppose you are not the 'right' person suited to solve another's problems.  Even a referral will keep you in mind.  Think twice about what may seem to be a dead-end project.  To be of assistance is to be remembered.

Tags:
do you build your niche and ignore eveyone else

This is what Ron's father did when he started his furniture business right down to the day he sold it to a large NY stock exchange company.  He always took calls, listened, etc.  He said he learned something every time, and they learned that he ran a great company with his brothers...Good will is important.  We do respond to those who call, and listen.  Ron will end the call, by saying we are not the right target market for you, so please, do not waste your valuable time with us.  Thank you for calling.

I like that you did the right/good thing John!  Our value proposition is often demonstrated by providing complimentary information to 'potential' clients.  It may not result in a sale, but goodwill definitely goes a long way in building a reputation that you can be proud of.

Your last sentence said it all.  To be of assistance, is to be remembered.

Hello Ron and Alexandra Seigel Great story about Ron's dad and how he handled business.  Yes, you should listen, thank and pass off if the fit isn't there.  In a very respective manner.  You will be remembered.

Hi Melinda (Mel) Peterson   Goodwill his difficult to measure and nothing may immediately result but I know that people who make it sound like you are cutting off a pound of their flesh if you bother them and don't spend money on their product or service -- will create a  super negative recall and reputation.  Thanks!

Hello James Dray  Being even a small bit of help will keep you in people's mind...  Thanks.