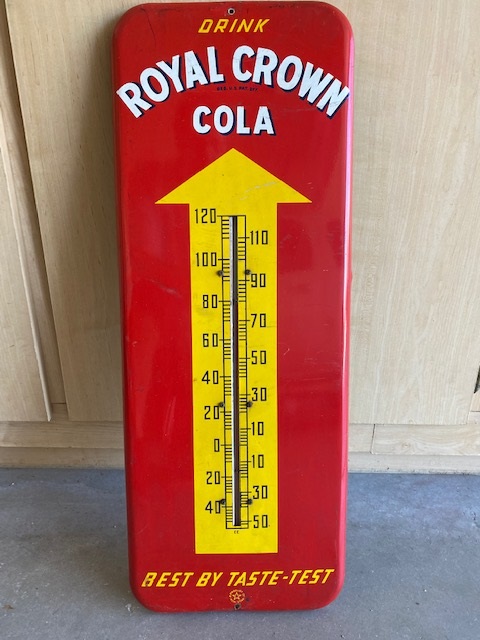 Moving is a stressful time. It becomes even more stressful when you have lived in a home for a long time and have acquired a lot of stuff and made a lot of memories.

We just completed the first leg of a move out of a house that we called home for 19 years. Going through all your belongings and deciding what to keep and what to dispose of is stressful. Both my wife and I were forced to shed many items that while still perfectly good no longer have a purpose in our lives.

Whenever you perform a move of this nature some items that you cherish are inevitably going to be left behind. You may also bring with you some items that have no purpose other than to bring a smile on your face.

One such item that I refused to part with is an old thermometer that I had mounted on the garage wall. The thermometer has significance because it is the last remaining vestige of my family history.

When I was a boy my grandfather owned a small grocery store on the south side of Chicago. It was a little Mom & Pop operation. He sold meat, fresh fruit and vegetables, and some package goods to people in the neighborhood. It was a time before supermarkets. He knew all of his customers by name, and they all knew Sam. As times began to change larger grocery stores replaced the neighborhood stores and eventually, supermarkets sprouted up all around.

The street where my grandfather’s store was located, eventually was bulldozed to make way for the Dan Ryan Expressway which runs north and south through the heart of Chicago.

Most of the fixtures and counters were sold off or thrown away. Only a few items from the old store were salvageable to be repurposed. I remember my uncle saved a huge old wooden “butcher block”. My father saved a couple of old items as well. He brought home an old deli meat slicer and a hand-cranked sausage grinder. Both of which he kept for many years. One special item that my father saved and I eventually inherited was the thermometer. It is a sign that was hanging on the wall near the front of the store. It probably was provided to store owners from the soft drink distributor as part of their advertising. It features Royal Crown Cola with the slogan “Best by taste-test.” When I was boxing the sign up for my move, I cleaned it up before packing. It noticed on the bottom that it was made in November 1952. I suppose that qualifies it as an antique. But for me a fond memory of my Grandfather and his neighborhood store. It is a memory that has lasted me a lifetime. Like what you are reading? Don't forget to bookmark this page and return here often.

Groups:
POSITIVE ATTITUDE for the Weary Soul
Diary of a Realtor
Bartender, Make it a Double
WeBlog Anything (almost)!
Old Farts Club

You must sign in or register to leave a comment
Login Register
Show All Comments
Ambassador
4,207,633
Jeff Dowler, CRS
eXp Realty of California - Carlsbad, CA
The Southern California Relocation Dude

I hope the move has gone well.

Having been through this you are certainly well equipped to help others who are moving, as you truly do understand what they are going through. There are always lots of memories to enjoy but it's important to not let them impede progress.

Different people cope in different ways with a move, especially after many years - some better than others -  and we need to be sensitive to that.

Josheph I totally understand, having moved many times in my life two trips crossing Oceans... left many wonderful items behind... then moving from the East Coast to the West Coast same story.... and yes I get it we manage to pick a few items not of monetary but of sentimental value... we look forward to reading where you landed and how it is now your forever home for the next 19-20 years:)Endre

Good morning, Joseph Domino 480-390-6011 what a nice find.... something to cherish, always remembering your grandfather when seeing it.... nice.

Good morning Joe. The first glance at that thermometer brought back memories I had not thought about in years. I remember when the Dan Ryan espressway was under construction. Thanks for the memories!

Hello Joseph - a nice story and wonderful memories. You made an excellent choice in keeping that thermometer from the family store.

I hope your move has and continues along a happy and successful path.

What a wonderful find - a piece of family history. I would have kept it also!

That is so awesome!

Now I know how my clients feel. Even though we planned the move, the last few days were hectic.

I have been in current home for 37 years.  I would hate contemplating a move.  I suspect at the end of my days, it will be me who gets moved out in a box!

Hi Joseph- I love this and it seems that you and I had similar experiences. My family had a neighborhood grocery store too. We knew the customers and in fact one couple moved next door to us when they sold their home.

I remember a gum machine that you put coins in and it would play "Who's Afraid of the Big Bad Wolf" I'd give anything to have that.