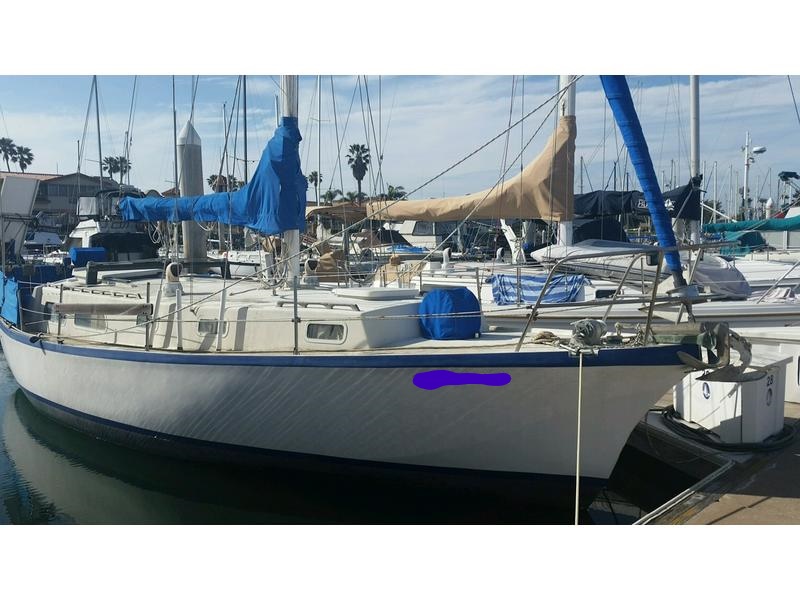 I was 15 or 16 years old at the time moving our family sail boat from the San Francisco area to L.A. with my Dad.

It was about a 3 hour trip from Redwood City, where our boat was in a marina to the Bay Area, we left around 3 a.m. when the tide was high enough for the keel of our 33 foot Yorktown sail boat, the vessel Respite, could clear the rarely dragged, thus shallow waters. Upon arrival to the Bay we stopped to take on some fuel for the diesel engine and my father made an attempt to add what is known as a radar reflector to our mast. The mast on this boat was about 40 feet above the deck and my father lost faith in the ropes pulling him to the top half way and elected to install the reflector on the starbord spreader. (A spreader is the cross in the mast held in place by rope or cables)

We set sail from one of the piers in the Bay around 9 a.m. heading toward open ocean under the Golden Gate Bridge. The trip would take 3 full days as the boat traveled at around 7 knots 8 miles per hour best case. All was going well up until 10 hours or so of travel in the ocean when the engine (which we had been using) began to fail. Being on a sail boat this was not a huge problem, we chose to continue the trip using the sails and call for a tow if we could not restart the engines once we reached L.A.

If you recall I mentioned the spreader? It turns out they are not designed to handle any weight and installing the reflector over it may not have been a good idea. Under the force of the wind, they spreader ripped off from the boat sending the mast and sails bending over into the Ocean. I still remember my father and his friend jumping up on the deck to pull the sails down and telling me to call the Coast Guard.

32 years later I still recall the signs. "Coast Guard - Coast Guard - This is Vessel Respite CF4229GK - Whiskey - Tango - Bravo, we have lost our engine and are without sail. ROGER Vessel Respite this is Coast Guard Station Half Moon Bay, we show you as a 33 foot sloop in 22 foot swells, we only have a 50 foot vessel from this location, we are unable to navigate 22 foot swells and will send a cutter from San Francisco. They will be on scene in 12 hours. Continue radio communication each 15 minutes until contacted by cutter".

Obviously after a long 12 or 13 hours we were rescued and towed by a 150 Foot United States Coast Guard Cutter back to safety. It was an adventure to say the least and to this day I am the only person I have met to be rescued by the Coast Guard. While ultimately, what seemed to be a complete disaster at the time, it has ended being one of the best memories I have with my Dad who recently passed away. Proof that very few of life's "disasters" truly are disasters.  There was really no harm done to the Respite, the engine failure turned out to be debris in her fuel tank and the mast, well, my Dad, his friend Rudy and myself all knew too well the cause of that. She eventually made it to L.A. a few weeks later.

As a footnote: The photo above was not of our boat. It is another of the same type in our marina. My father replaced that boat many years ago after learning and many hundreds of hours and more importantly great times on her. While she was replaced with much larger ocean going sail boat, I will always have the best memories from the Vessel Respite CF4229GK and the time my father and I shared and learned on her.

What a scary but wonderful story. Your "disaster" turned out to be a memory you will treasure forever.

When I met my husband, he had a 33 foot full keel cruising sailboat named Freebird. Unfortunately, it was a drive to get to the river and we eventually sold it because we couldn't use it. But... the only trip I went on was done against the current at 3 knots. OMG. That was so slow. It took an hour to pass one building, at least that is what it seemed like.

I guess the point is that sailboats can certainly create memories!

They are painfully slow. We actually sold the Respite with plans to buy a power boat that had less draft. We kept her in northern California and the Marina was rarely dragged and the silt let the water about 4 feet deep at low tide, did not work well for a boat with a 6 foot keel and 8 foot draft.

Great memories are often what happens when things don't go according to plan :)   Quite the adventure!

Funny enough that always seems when we create adventures!

Hi Jim- wow and yes, what an adventure. Some of my fondest memories have been when we were on one of our boats. I can remember one incident when we had our first saltwater boat and still new to the Boca Inlet. Tide going out...waves coming in and you know how little control you have when that happens. Love your story.

Thanks Kathy, yes it is a nice reminder of how powerless we really are over mother nature.

Hi Jim Lord - like James Dray my wife does not do well on the ocean even when when we come out of the inlet on a 24 motor powered boat.

My wife is not a fan either, result of a bad whale watching trip....

What a great memory... if not for the courage of the fearless crew...

I assure you there was far less courage than there was throwing up over board!

What a great story. Talk about a bonding experience. My husband was in the Coast Guard. I’ll be sure to share your story with him.

Coast Guard is my favorite of the services for obvious reasons!

I, too, remember days with my father when we would go tuna fishing off Point Judith in Rhode Island Jim Lord I'm glad your adventure turned out positively.

My Dad and I did a shark derby off the same boat, another story for another time!!!

What great memories, I miss my dad, my hero who passed away 20 years ago this month.  What we sometimes think or feel maybe a bad thing, works out to be for our good.  good memories to have and share. Thanks for sharing your story.

I was ultimately not that close to my Dad so I have few of these memories so they have become even more important now that he is gone.

Great post, those memories we have with our fathers, so true, we remember what looks like a disaster, especially when it really isn't and we get to tell the story later.

What is funny, we must have gone out on that boat 500 times and all I remember (laughingly) are the times it went bad. We bonded in those situations having stories that only we shared.

WOW!  I loved this post.  One of my favorites ever.  What a scary time, but what a memory.  You are so blessed to have that.  My sorrows to you for your dads passing.

Thank you. My Dad and I were never that close but we did have some excitng times when we set out on these adventures and I credit him for my love of the ocean among other things.

That is quite a story and you no doubt wll never forget it. That sure was a long wait for a rescue!

Sorry to hear about your Dad!

All I can say is going up 20 feet and seeing the lights on the coast of CA and then going down 20 feet to total darkness did not help the sea sickness.

Your story started out like Gilligan's Island, Jim...a 3 hour (tour) trip! Memories are the best proof of a great life filled with loved ones, great challenges, overcoming adversity and amazing successes.

Hi Jim: Your memory of the event is so clear, it is as if it happened yesterday. It's interesting also because the memories that stay with us steer the way for how we hold everything that happens to us. Glad that is was a memorable time with you and your Dad and that it ended well.

I had a similar one with my Dad only it was on one of the Great Lakes racing a 19' Lightning in the North American challenge.  I started crewing with my Dad when I was about 7 and had the forman task of front sail and jibing the spinnaker Pole on the deck.  Our fleet was out of Washington DC but we traveled to regattas. We didn't make the NAs but our friend did and asked us to crew with him.  We were doing fantastically well and had taken a course with great wind!  However on one long tight tack, our mast snapped while out hiking to keep the boat flat.  That was a memory point, being hung out in screaming wind then suddenly bolt upright with no action and mast & sails in the water.  Gratefully we were a small non engine/centerboard racer and could be towed to land in an hour by the committee boat.  I don't remember how they found us as we didn't have a radio and certainly no cell phones in the 70s!

Thank you for reminding me of this very special memory with my Dad as well.

Twelve hours!  What an experience!!  So glad it turned out OK.

That is a great memor to have with your Dad.  I must say 12 hours dead in the water in 22 foot seas would be scary. Did you have a sea sock (drift anchor)  to drag to keep you headed into the seas?

You and your Dad were extremely fortunate to survive that one!

Some of our best memories of family outings are of times when things didn't go exactly as planned. Like the time we rented a cabin and it was so dirty that we put garbage bags over the beds before laying down our sleeping bags - and showered with shoes on.

Nothing really life-threatening, although there were a few times in our boat when I was very frightened.

Jim, A great bonding episode with your father and Rudy.  You were a fearless crew.

What a great story and memory with your Dad.  I can only imagine how you felt out there. I would have been terrified, but growing up near a marina you probably have steadier sea legs!  Thank you for sharing your story.