Eliza Ann Grier was born in Mecklenburg County, North Carolina back in 1864 to George and Emily.  Moving to Nashville, Tennessee she studied teaching at Fisk University.  She continued her education at the Woman’s Medical College of Pennsylvania attending from 1890 to 1897.

After graduation, she moved to Atlanta, Georgia specializing in obstetrics and gynecology.  After just four years of private practice she fell ill and had to close her practice in 1901.  She moved to Albany, Georgia where she died in 1902, she was 38.

Good morning, James Dray another powerful woman leading the way for other women..... 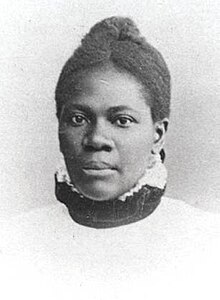 And Influenza took another life too soon!

Hello James - entering the field of medicine for anyone is a noteworthy accomplishment.  Each deserve our praise.  Eliza seems to have paved other roads as well.

That was a great feat in those days and it was sad to see her pass at such a young age.

Good morning James. She definitely was way ahead of her time leading the way! Enjoy your day!

She accomplished all this in a time when segregation was the letter of the law. Truly astounding...

A short but historic career James Dray . It's always a shame when any life is cut short.

James, Eliza was a pioneer for women, and Nina will enjoy this one, being from Mecklenburg county.

She passed away too early in life, but it sounds like she brought a lot of good into the world before she did so.

A true pioneer, James, from my adopted home county of Mecklenburg. Shame she died so young... one has to wonder what more she could have achieved with another 30+ years of life.

Always love these posts on the first person to do such and such, forging the way and providing an example for others on what can be achieved, shame her life was cut short, I am sure she would have accomplished a lot more if she had lived longer.

Hello James,  A first for everything once again that you are teaching us here in the Rain.

Good afternoon James Dray - such a talented woman and sad that she died so young.

Sounds like Eliza accomplished plenty in a short amount of time. She definitely lived her life to the fullest.

HI James- only 38- so young and look at what she achieved.

Hi James Dray - What a great inspiration and a tragedy that she couldn't inspire more women because of early death.

Another impressive and well deserved achievement! Bravo for Dr. Grier! Too bad her life was cut so short!! Imagine what she might have done in her field.

Wow now why can not get more public information like this out instead of all the garbage that is on the news...Endre

Hi James,
I do love to hear about women who were the first at doing something. Eliza wasn't allowing any barriers to stop her from accomplishing her goals was she? Too bad she died so young.