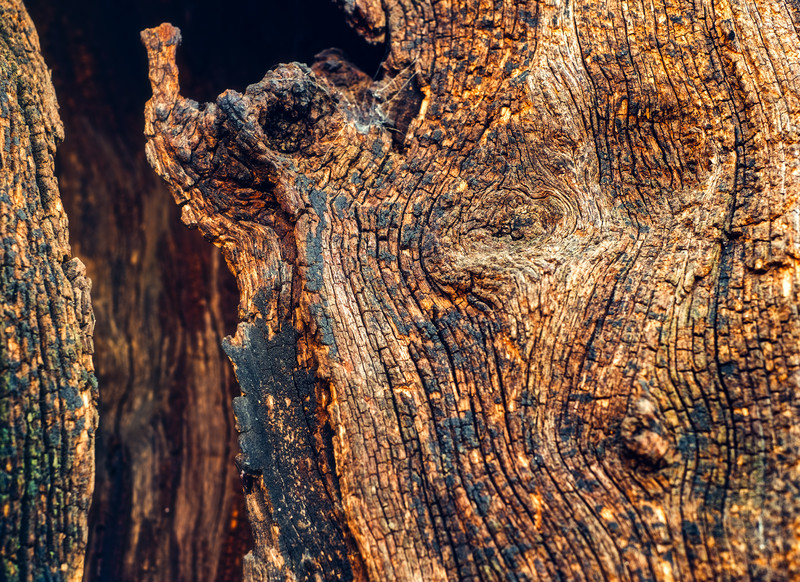 As I turned the corner on my walk, I saw it...a big tree.  I am sure I have noticed it in the past but Thursday morning for some reason it looked different.  While large, this would not likely qualify as a giant one.

Years before...I remember seeing the tree known as the General Sherman.  As an aside, it was an amicable meeting but there's no chance of me being mistaken as a 21st century John Muir but I do notice trees.  Nothing serious and certainly not of a studious nature.

The particular tree I viewed had caused some damage to the sidewalk and to the adjacent curb.  It was still early as the rising sun was already shining bright. There were predictions of soaring temperatures and I was certain some later passersby would appreciate the shade offered by the big tree.  Later I noticed another neighborhood tree with a cautionary tag attached to it along with a well-used yet seemingly still serviceable child's swing suspended from one of its branches.

My mind as it often does went to thoughts of history, people and neighborhoods along with the connection of those things to trees.  Each seemed to share similar characteristics.   Twisted and gnarled in their own unique ways.  I pondered all sorts of comparisons.   Trees are a part of neighborhoods.   There is a random physical distancing of many trees that seems to work at times.  They have roots.  Old roots which often run deep.  Some may be the new kids on the block replacing ones who have left.

And while I can't identify many of them by name, I can still appreciate them.  The welcoming presence they give to the area is one of the nicest things they add.  Like my lack of similarity to Muir, I have no connection to Joyce Kilmer but I can still value and can show respect.  Maybe it's just a smile.  Or a nod.

Trees definitely enhance neighborhoods in my opinion.  Just like neighbors of all kinds.

Raymond Henson, SRES, GRI - there is something quite special about uniqueness but I also appreciate the symmetry offered by some patterns along with organization.

Good morning Michael Jacobs -  If that tree could talk imagine what it could tell you.

Grant Schneider - I often think of the voices that could be heard if only we had the power to listen.

I live in a Grove of 20 cedar trees that frame my view perfectly. There's something about their Majestic gross that makes me feel safe and gives me peace of mind...

A large fir tree outside the window view from my desk brings me joy. I've dubbed it "Old Faithful Two," after my childhood tree pal. I use to climb up into the limbs of Old Faithful and share my heartaches or insecurities. This  tree-lover greatly appreciates this post.

Paul S. Henderson, REALTOR®, CRS - that sounds quite nice. I hope your Friday is going well too.

Debb Janes EcoBroker and Bernie Stea JD - what a nice memory you have shared.  Thank you.

HI Michael- I too love trees. Crazy me as I talk to myself on our walks, I'll talk to the trees as well and tell them what a grand tree they are. Thankfully only Larry hears me and he knows that I'm nuts.

For some reason my mind thought of the gnarly talking tree in the Wizard of OZ reading your post.

Kathy Streib - who am I to call anyone "nuts"?

Sharon Lee - I can understand why that thought might come to you.

I'm sure that tree could tell some stories, some of which would be interesting.

James Dray - there are likely unlimited stories to be told from many sources.  Is anyone in the forest listening...that may be the next question.

Trees are wonderful in so many ways but they can also cause issues from time to time.

Brian England - like so many things in life, there are issues that are discovered and perhaps, addressed.  Timeliness is definitely part of this "discussion".

Love this Michael and I'm of the mindset that the more unique, the better. I also agree that they are welcoming and it kills me to see these developers clear-cut property instead of working around trees. They just make a far nicer canopy than just the sky!

Debe Maxwell, CRS - it seems there is an increased awareness by many who want a friendlier approach to our environment.  Aesthetically pleasing as well as good for business.  When that occurs, more win.

That's a pretty cool looking tree trunk.  I haven't seen the General Sherman tree yet but have enjoyed several visits to Muir Woods, which is pretty impressive.

Jeff Dowler, CRS - we are quite fortunate in California with our diversity of parks. I liked my visit to Muir Woods as well.

I so enjoy trees. Their swaying in the wind and their shade and their beauty. I have wonderful childhood memories of playing amongst the trees with my siblings and my friends.

Sharon Tara - I never had a treehouse but thought the idea was kinda cool, did you?  Later in life, I have lived in places where I was on the top floor - does that count?

No, I've never had a treehouse. When home hunting a couple of years ago, though we almost put an offer on a house because we loved the treehouse in the yard. When we returned for a second look at the home we sadly realized it was just too small for us. We had to give up the treehouse, much to the disappointment of Jack and Tom who had gone to see the house with us. LOL