Wendelin Grimm was born in Külsheim, Germany back in 1818 to Valentine and Mary.  His education was limited to training for a career in farming.  He married Julianna where they stayed until 1857, when they moved to Carver County Minnesota, via New York.  They settled in what is now modern-day Victoria, Minnesota.

When he arrived in Carver County he not only moved his family he also brought a small bag of everlasting clover seeds.  Winters in his new home were harsh compared to Germany.  He would save some of the seeds and replant them each year.  It wasn’t long before they grew a resistance to the harsh winters. He passed the original farmstead to his son Frank in 1872, moving to Chaska, Minnesota continuing farming until his death in 1890, he was 72.

What you may not know about Wendelin is that he is best known for his innovative seed saving techniques that resulted in North America’s first winter-hardy alfalfa.  It is estimated that all of North American alfalfa comes from the seeds that Wendelin saved.  Those seeds account for 60 million acres of alfalfa with a value today of 3.4 billion annually.

Planted quite a few acres of alfalfa and handled a few bales.

Reminds me of "Johnny Appleseed".

Good morning James. Anoter name on which I know nothing. I have, however, heard of winter-hardy alfalfa. Enjoy your day!

Well, who knew, James? I surely didn't. But I do now! Happy Monday to you!

That is a new one that I had no idea of his accomplishments. I did see a special on our national seed bank that was impressive.

This one strikes close to home James Dray as I was born a Minnesotan. Thank you for the fun tidbit that I did not know.

Good morning, James Dray and this is the farmhouse where Wendelin Grimm and his wife lived..... we have several of that type of housing in Franklin MA... 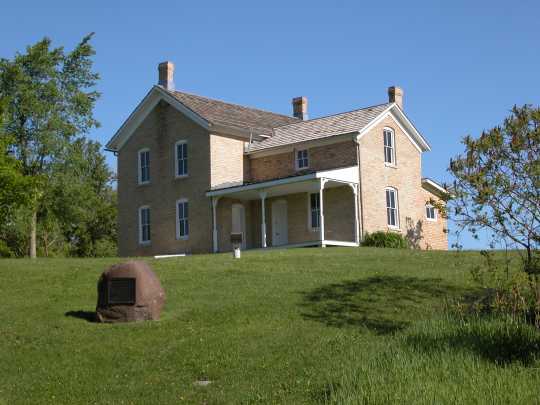 That definitely goes to show that failures should not hold people back, we should learn from them and trudge on towards success.

Hello James - this wasn't quite the story I was anticipating when I initially read your title.  Learning something new each day.

Interesting, amazing how plants change and transform. I remeber hearing recently about the seed banks that are held in different places to maintain and continue heirloom plants. Love the name Wendelin.

James, you come up with some very interesting people, and those who made a big difference in today's world.

Cool story as always. Maybe his family should get a little $$$ from all those crops :):):)

Again you surprised me with something I had given very little thought. Thank you for schooling me once more...

Your posts are like a mini adventure.  Who know about winter alfalfa...I was clueless about this and the man behind it.  A

Hi James Dray - You have provided us with another great learning experience. Many in farming sciences may have studied this but I learned about it today!  Thank you.

You know James- there are so many people to whom we owe a debt of gratitude.

That was a pretty impressive story and accomplishment! I knew a little about alfalfa from having grown up around horses but this was all news to me!

Hi James,  Thanks for sharing this story of Wendelin Grimm.  We are fortunate that he had the foresight to bring a bag of alfalfa with him, to continue to grow and strengthen it.

Barbara Todaro is adding extra impact to the comments here with her pictures - loved hearing about the alfalfa!

I am sure that Mr. Wendelin Grimm's family wishes that he had patented his process for saving the seeds