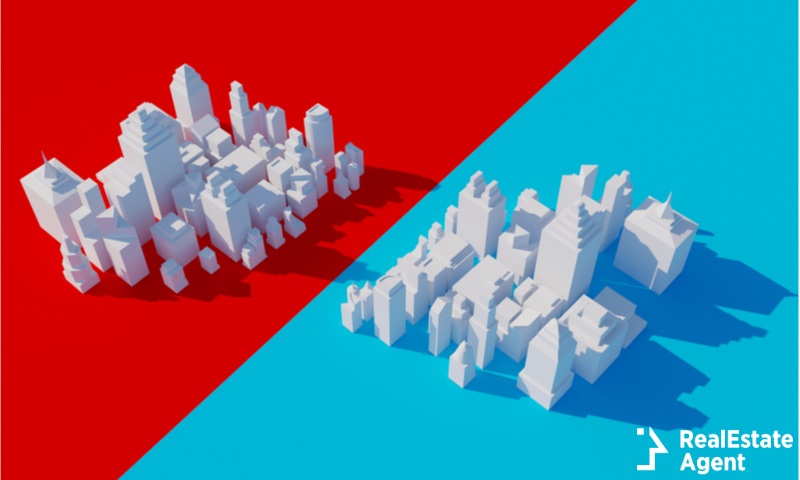 If we look towards the Eastern edge of Maryland, we can find two small towns that each have their specific attributes and characteristics. Both cities are valid choices for young families with underage children. As there is a great number of families that have children living in both cities, it is easy to nurture social connections within the community with other families, both for the parents and children. Both cities are part of the Anne Arundel County Public School District and the ratings of these schools are similar with little differences.

As both cities are surrounded by large bodies of water, they both offer consistent characteristics that coastal towns offer. But let’s take a closer look into the areas which are most important for the people who would like to live in either of the two cities. Both cities have a very large percentage of single-family detached homes accounting for around 68% in Pasadena, MD, while in Severna Park the percentage of single-family detached homes goes as high as 94%. Both cities are centered around family-life while having all the characteristics of a small town life. Here everybody knows everyone and creating social connections between neighbors is easy. With single-family homes also comes an area around the house where children can play and entertain themselves while the parents can keep a close eye on them.

In regards to prices, there is a slight difference in housing costs between the two coastal towns. If in Pasadena, MD the median house price is $330,000 and is above the national average, then in Severna Park, where the median house price is $539,000, it’s safe to say that it’s among the most expensive real estate markets in the country. The local realtors in Pasadena MD are available for any questions about the housing market in this area.

In both towns, a large majority of the residents own their homes. That’s how we get 92% owner-occupied housing in Severna Park and 84% in Pasadena, MD. If you’re interested in taking advantage of either of these coastal towns, you can look into waterfront homes for sale in Pasadena, or, for comparison if you want, browse around the best waterfront neighborhoods in Severna Park. As explained above, the housing market creates a big discrepancy between these two cities and this discrepancy throws off the balance in regards to the cost of living, but let’s see how that balance shifts.

The average expense for housing, when looking at homes that are owned is around 55% more expensive in Pasadena, MD than the national average, while in Severna Park, housing costs are increased by 177% when compared to the prices across the rest of U.S. cities. However, the renting costs even things out to a degree. In Severna Park, renting an apartment requires a monthly fee of approximately $1,550, while in Pasadena the monthly cost for rent is $1,650. The difference is higher when purchasing real estate in Severna Park especially since renting isn’t something that residents from either town are prone to choose. You can ask real estate agents in Severna Park, MD for more information about buying a home here.

Looking at the monthly cost for a family of four in each town, we can’t find any other differences. Either if it’s health care, transportation, groceries or utilities, the prices are similar if not the same. Overall, the cost of living is higher by around 20% in Severna Park than it is in Pasadena, MD. With an overall crime rate in Maryland that is higher than the rest of the country, the residents of the state are highly concerned and are advocating for change. In Anne Arundel County, located between cities of Baltimore and Annapolis, we’ll be able to find our two cities which are safer in comparison.

Severna Park, MD wins this category by a long shot being considered safer than 60% of all other cities in the U.S. Unfortunately, there is some struggling with crime statistics in Pasadena but the situation is better when compared to Baltimore. In highlight, both cities have seen improvements on this front by 9% year to year as the number of crimes has decreased. As things are looking up we’re expecting this trend to continue in the future. As generations have been calling these cities their home, we will take a look at how the school system contributes to the children’s education. Families that move here tend to stay here for generations, which is why we chose the term. Homes are handed down from father to son and businesses as well. Which is why the educational system is important. People want to know that their children can benefit from the best schools available in the county. Let’s see how that works for both Severna Park and Pasadena as they are both part of the Anne Arundel County Public School District.

In regards to Pasadena, MD the whole educational system is comprised of 12 public schools and 9 private schools. The best area for education is in the Pinehurst neighborhood where you’ll find Bodkin Elementary school which is one of the highest ranking schools in the district with an overall rating of 9 on a scale from 1-10 where 10 is the best. Graduation rates are higher in Pasadena, MD than the national average both for middle and high school as well as college and masters graduates.

If we take a look at Severna Park, MD what we saw in Pasadena begins to look rather unimpressive. Severna Park trumps the national average in most levels of education. There are 94.4% high-school graduates, 66% of the students also have an associate degree and over 60% have a bachelor's degree. Only 30% of the students have a bachelor’s degree nationally. If we look further at those who completed their master’s, 26.5% have done so in Severna Park, while only 11.5% got their master’s nationally. With only 8 public schools and 7 private schools, Severna Park is breaking the boundaries of education while paving the way for highly intellectual individuals.

When it comes to deciding between the two cities, it’s best to have all the variables on hand. Make your decision and even do some more digging as both towns have their own pluses and minuses. Whether it’s housing or safety that is more important to you, location matters as well. With a 27 minute commute to Baltimore, Pasadena wins that race but only by 3 minutes. There is not a lot of distance between the two towns and a 3 minutes difference in commute is barely worth mentioning. There are far more important things that we tried to shed some light on.

Let us know in the comments below which city won you over as the match is too balanced for us to decide. Like & Share with those important to you and get their opinions as well.