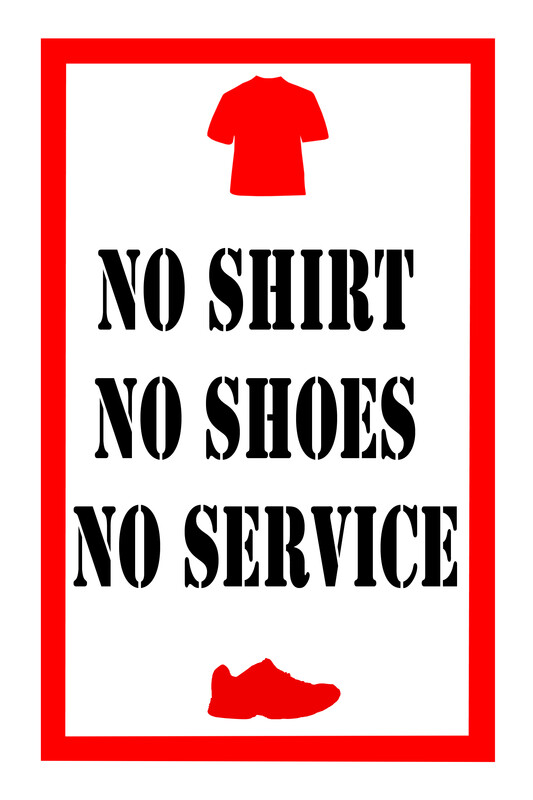 Pretty simple words but interpretation can change the message.  And not only can it, it does.  And seemingly often.

Off on a different path but the same route: I still remember the signs at the entrance of some business establishments which stated:  No Shirt. No Shoes.  No Service.  Ah, simpler times. But it seemed to be pretty straight-forward.  And effective. Oh, well.

Still on that different path but just for a bit more:  I have learned that sign-making is an essential business.  That's good for the profession, I think.   However, that hasn't stopped the creative spelling and grammar I have seen on some signs which appears to have been completed hastily. This combined with the use of crayons and unique font choices reassures me that there is room for professionals in the industry.  I digress.

Recently, I was speaking with my sister(another interesting word choice in the 21st century). We were discussing requirements while out and about.

Although, she also also lives in California and not-that-far-away, she is in another jurisdiction.  We were discussing various Rules. But first, it was Recommendations. Followed by Requirements.  And then came, Rejections(involving the previously mentioned recommendations and requirements).  There is no shortage of any of these.

The conversation continued.  It seems to be a never-ending one.  Not only was time exhausted, I think any continued effort attempting to resolve would be ridiculous.

Hey Michael, remember that song from the 70s...Signs. That was a different time for sure!

Wayne Martin - there are many constant companions in life.  Choose wisely.

Sham Reddy CRS - thanks for the visit and the comment.

Nina Hollander - there seems to be a correlation.  Often.

First thing I thought of was the song Signs. Great song!

Brian England - that's a possibility.  A probability?  Perhaps.  Of course, I prefer no predictions.

Patricia Feager, MBA, CRS, GRI,MRP - it's wise in my opinion to look at many sides.  I encourage it.

Kathleen Daniels - committed to staying current makes me wonder. . .    P.S. thanks for the recognition within the Craptacular group.  I appreciate the notice of my crappiness.

Sharon Tara - a classic song of sorts.  At least from my past.

I think we are seeing so many different approaches to this with so many guidelines which are not clear in the first place. Lack of leadership throughout the country and in both parties has unfortunately confused and muddied the waters and no doubt caused deaths.

I always enjoy your ponder ready blog posts. You open up my mind to so many different connotations...

Good morning Michael Jacobs - right now in New York it is "No Mask, No Entry."

Hi Micahel- lots of "R's" being used. There is a big leap between recommended and required. One day we quickly moved from Recommended to Required and later that day Recommended.

I could not have said it any better than Kathleen Daniels did.  We are going through the same confusion, yes mask, no mask...Happy to see that our city parking lot attendants back on the job, and the dry dock repair is fast and furious getting boats ready...lots more smiles eveywhere with the opening of our county....A

Paul S. Henderson, REALTOR®, CRS - I hope your Monday and another week is also off to a good start.

Grant Schneider - there is no shortage of rules in California. Often followed by confusion.

Kathy Streib - and just when reading, 'riting and 'rithmetic were starting to be understood.

Ron and Alexandra Seigel - and I am sure not only the attendants are happy but the city coffers as well.

Ahhhh this is when just floating around in the pool or walking underneath cool trees kind of makes the confusion not confusing. Boil it down to hear and now (throw in some nature) and it all kind of goes away. It's a bit different for us in AZ as businesses and restaurants are open and it's been a delight to go out once again.  Here's hoping your state 'shifts' the confusion status back to - let's get going again.

Hi Michael,
Recommendations became Requirements and now the natives are getting restless and Rejecting those Restrictions.  Time to start living again.

Anna Banana Kruchten Arizona's Top Banana! - your comment made me think of hot water and if some notice the boiling before it's too late.

Carol Williams - I have read about those who have experienced long periods of isolation(astronauts on long expeditions for example) and how they bring a certain reality to living.

Rules and required, are always changing.  It's never ending, I wonder what they will come up with next?

Many of us are trying to comply with a whole new set of rules. We still have a stay at home order in our county and we are at home in the social distancing mode.

Hi Michael Jacobs, we have the same s... show in Central FL. Different counties, different rules, requirements and protests. It would be much easier to say the heck with this and step out when it's safe but that's not realistic.

Beth Atalay - difference of opinion is understandable but it does seem there is a difference of "fact" as well.  Thank you for the highlight within the Bananatude group.  I appreciate it.