Samuel Guthrie was born in Hampden County Massachusetts back in 1782.  I have searched and could not find anything about him until he was 22 when he married Sybil Sexton. He studied at the College of Physicians and Surgeons of New York, (now Columbia University) from 1810 to 1811.  He also attended lectures at the University of Pennsylvania in 1815, which constituted his entire formal education.

What you may not know about Samuel is that he was also a successful business man and inventor. He manufactured chloric ether, vinegar and priming powder for firearms, making the flintlock muskets obsolete.  He also converted potato starch into molasses and distilled an alcohol.  But he is most noted for the discovery of chloroform independently in 1831. 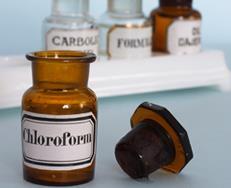 Well I guess you can say he did not stop working after his first accomplishment.

Too bad we cannot use chloroform on many of our politicians! Oh and some media as well!

Good morning, James... no doubt that chloroform was a very important invention. Happy Monday to you!

It sounds like he was more than just a good doctor and I am sure that his family was very proud of his accomplishments.

Samuel obviously liked to dabble around with his chemicals, wonder what else he discovered while doing that dabbling.

Hello James - the world needs more inventors and thought tinkerers in the mix of people.

Wow, Samual was certainly a diverse thinker. I can see why he is not a household name but you would think most of us would have come across his name at one time or another James Dray .

I did not realize that chloroform was that old I thought it was something from the early 20th century. That's why I tune in every morning, to learn...

Wow James- what an inventor!!!!   Have a wonderful week.

Chloroform was something I knew about, and so glad you told the rest of the story.  A

Hi James Dray - Sometimes I do my own research to learn more.  I always thought that it was easy to sedate a person quickly using chloroform like they do in the movies.  Come to find out, this is not the case!

Hi James, Thanks for sharing this interesting story of Samuel Guthrie.  We are grateful to these creative inventors.

I've certainly heard of chloroform but knew nothing about the inventor - now I know!

The varied accomplishments of Samuel Guthrie are truly amazing.