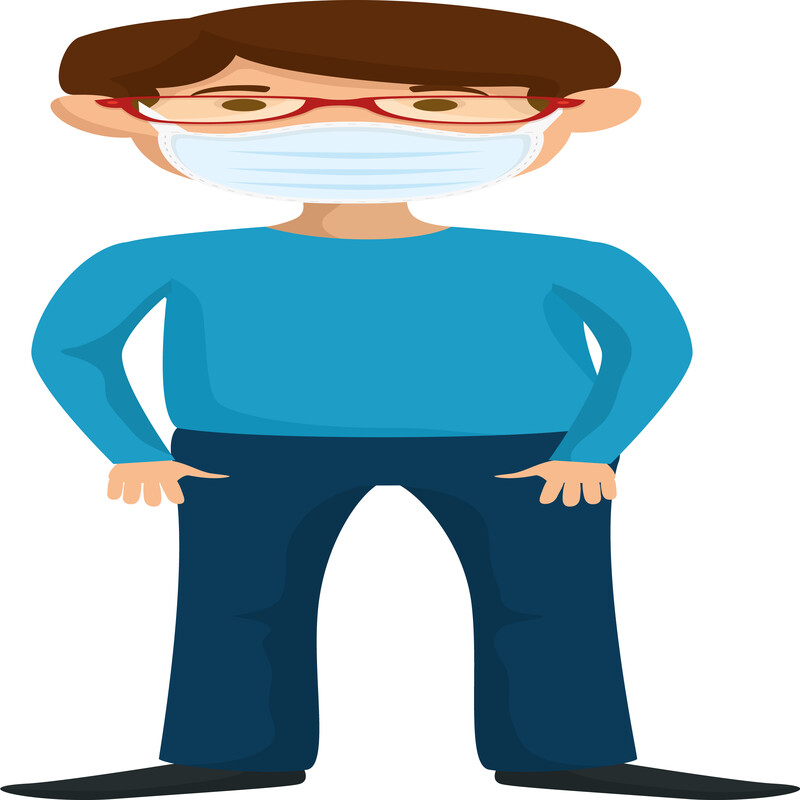 When Smoke Gets In Your Eyes

I remember when I first started wearing glasses.   It was particularly memorable because it was the same year that my experience with orthodontia and the onset of puberty each made their initial appearance.  Being an eleven-year-old boy is not just fun and games.  I digress. . .

I wore glasses but only for distance in school and later while driving.  Eventually, I switched to contact lenses.  It seems I experienced many types of lenses.  Hard.  Soft.  Extended-wear.  This became a part of my life for decades.

A little over two years ago, I switched back to wearing glasses.   I don't wear them all of time but more often than not.  I generally didn't give much thought to them until wearing face-coverings became a part of everyday life.  The combination of glasses and masks are not the best pairing.

While out-and-about when masks or some other face-covering is required, my glasses tend to "fog over".  Second-hand smoke is generally no longer much of an issue in our area but other annoyances still exist. The combination of eyeglasses and face-coverings is only one.

I realize it is a first-world problem.  I'll survive this annoyance.  It's amazing to see what can be overcome.

The first time I experienced my glasses fogging up while wearing a mask was when I was driving my car.  I did a little research about that, and found information to keep it from happening, which I have provided a link to below.  However, I usually only wear glasses when I am driving.  And, because I am in the car uusually alone, I realized I don't need to be wearing my mask there.

CONGRATULATIONS Michael, on having this blog FEATURED in the Old Farts Club group!

Grant Schneider - it's certainly a minor annoyance but an annoyance just the same.

Kathy Streib - I remember my first set of contacts - yes, they were large.

Myrl Jeffcoat - I have tried this method and while there was some improvement, it did not completely eliminate the fog.  Thank you for the highlight within the OFC group.  I appreciate it.

My wife glasses were fogging up when she wears her mask, that is until she realized there is a thin wire on the mask.  Now there is no issue

Hahaha, I just experience this a few days ago. Met a photographer at a listing and had on my mask, with glasses, so I could read my notes. I started fogging up. Lol.

Michael, gave up wearing lenses, and now wear only glasses when I drive and to see distant objects. I have a feeling I will have the same issues with the combination masks+glasses. Ah, well. I can't wait until those clear shields become easier to wear and inexpensive enough to be worn in stead of masks.

I came across this solution with two buttons attached to the sides of the glasses, not sure if the link will show correctly: https://www.gif-fcv.com/reactions/gif/778/life-hax?fbclid=IwAR0fCTAWTokATpeie8kw95tRTYEtxV_O1R2rjTchYI8KuRWq7BNCue

I got glasses when I was six. My mother used to make me wear a headband, supposedly to prevent me from taking the glasses off. Little did she know that as soon as I got on the school bus I took off both the headband and the glasses. A call from a concerned teacher regarding my ability to see in class eventually tipped her off.

As for the foggy glasses. It is my understanding that if this is happening it is an indication that the mask isn't fully doing its job. My masks have wire at the top of the nose that allows you to mold the mask tighter at the top. My glasses don't fog up.

I didn't stated wearing glasses until I was in my sixties but I'm with you on the annoyance of face masks and wearing masks..it's a hot mess!

James Dray - maybe this issue is with my face.  Hmm...I don't if that issue can be resolved.

Debb Janes EcoBroker and Bernie Stea JD - as we enter each phase, it seems face-coverings are a part of the routine, I anticipate when the future includes something different.  Oh, well.

Steffy Hristova - thanks.  I will check it out.

Sharon Tara - I probably wear my glasses now more than I ever did when growing up.  I have tried many different mask techniques and now I think I will try the one that Steffy suggests.

Have a very special Memorial Day and an outstanding week.

I have been in a fog for many a year however wearing a mask really intensifies  it...

Hi Michael Jacobs - I can see the annoyance that wearing glasses and a mask would bring.  I find it hard to breathe in a mask.

Roy Kelley - I hope your Monday has been going well.

Sheri Sperry - MCNE® - it seems they are a necessary "evil" in many parts of our area.

Hello Michael,  I had glasses in first grade to 3 grade and got lucky after 3rd grade and had 20 20 vision.  Of ocourse now I have to wear reading glasses after I turn 55.  My wife and the mask do not work that great she said.

Will Hamm - your transformation to 20/20 vision was quite fortunate.  I know of many who utilize reading glasses.  It seems their usage extends beyond age.

Michael Jacobs - there are many of us facing the same issues with foggy glasses due to wearing masks. I started wearing eye glasses when I was nine. By the time I turned 16 I got the hard contact lenses. When they came out with the soft lenses I couldn't wear them. In more recent years after major surgery I couldn't wear contacts at all and the only opition was glasses. I noticed immediately fogged up lenses due to masks and it's most annoying. I don't like it at all and I'm afraid that when the heat turns up foggy eyes will be here to stay. UGH! Perhaps somebody will invent new lenses that are fog proof. I found out there are different types of lense materials and one solution doesn't fit all.

Patricia Feager, MBA, CRS, GRI,MRP - I have found certain occasions when the fogginess is less or even non-existent but not one "solution" that is consistent.  So far.

It's definitely an annoyance for me.  I have resisted publicly voicing my  "concern" because of its relative pettiness until this post.

Michael Jacobs - I don't think it's pettiness at all. I think of it as a safety issue. If we really and truly need to wear masks, than improvement has to be made to proper masks that work effective and they can't be so expensive that only about 20% of the population can afford them. I have heard wearing masks is even worse when it comes to bacteria.

Funny you should mention the fogging, Michael, although not in a ha ha sort of way. Between the reading glasses and the sunglasses, the fog is often present. Maybe I am breathing too heavily!

Patricia Feager, MBA, CRS, GRI,MRP - perhaps pettiness wasn't the proper word to use but in the scheme of more crucial world issues, the fogginess of glasses is one where I can adjust.

Jeff Dowler, CRS - I also wonder at times if I am breathing too heavily as well.